Above, the President’s Own Marine Band

The long-anticipated inauguration of President Joe Biden and Vice President Kamala Harris finally arrived on Jan. 20, 2021. It was a day filled with emotion, high hopes and profound relief.

The ceremony itself was very moving, thanks in large part to the musical performances, which got a lot of well-deserved attention. I will leave the debate over the arrangement of the national anthem in 4/4 to others. Noteworthy — and notably uncontroversial — was the outstanding musicianship of the “President’s Own” Marine Band. Seeing them at work elicited memories of my own time (1990 to 1994) serving in the Coast Guard Band, where I had the honor of performing for the inauguration of Bill Clinton in 1993. That day is still vivid in memory, as I witnessed the enormous undertaking involved in the continuation of this profoundly important tradition that is a cornerstone of our democracy.

Each branch of the military has several bands, but only one “premier” band. Each premier band’s mission is public relations and outreach on behalf of the service via musical performances. As such, duties consist mainly of concerts, ceremonies and parades. The bands routinely perform for dignitaries and important national celebrations. Every four years, all the bands descend on Washington, D.C. to participate in the inaugural parade and related events and ceremonies.

I remember in 1993 how D.C. was packed with millions of visitors for Clinton’s inaugural. There were festivities of every type, with free concerts, theatrical performances and parties all over town. As the Coast Guard Band is the only premier band stationed outside of D.C., we were bussed into town a few days early to play some additional ceremonies which left us with a little free time to enjoy the celebrations.

On Inauguration Day itself, “hurry up and wait” was the theme of the day. That phrase did not originate in the military for nothing. The brass players had an early rehearsal for a massive performance of “Fanfare for the Common Man” to be performed at the top of the ceremony. The rest of us, after being shuttled through two or three security checkpoints, were lined up outside to wait for the parade to begin. It was a relief to finally step off. The cheering crowds boosted our energy, and when we marched past the reviewing stand, the cold weather and discomfort were forgotten as the magnitude and significance of the day hit home.

Local 802 member Chris MacDonnell played in the President’s Own Marine Band in 1993. Since that band was the musical centerpiece of Clinton’s inauguration, Chris had a more grueling day than I. Chris remembers, “We started at 5:30 a.m. with a muster at the barracks to bus to the Capitol by 7 a.m. for a security sweep. We were seated at the Capitol and ready to play by 9 a.m.. The band played a pre-concert until the ceremony officially started at around 11 a.m. After the ceremony, we were brought to the parade site, where we marched along with the other military bands. The crowds were huge and exuberant. It was quite exciting.”

After the parade, the day was far from over. The new president, vice president and their spouses make an appearance at every one of several inaugural balls around town and their entrance must be heralded with a rendition of “Hail to the Chief.” Each military band gets assigned to one of the balls, and so the second round of waiting commenced. The entire band was ushered through yet another round of security and led into a tiny, completely empty basement room with no chairs or tables. It was well past 1 a.m. when we finally played “Hail to the Chief,” and one other tune. The whole “performance” took less than five minutes. MacDonnell had a similar experience. Chris told me, “Post parade, we were divided up into smaller groups and transferred to one of the many inaugural balls, where we waited for the president to arrive. We didn’t get home until after 2 a.m. Although it was a long day, it was a great honor to play for the new president and a monumental day I will never forget.”

Below, please see one of my mementos of playing on Inauguration Day. We weren’t allowed to take photos, and cell phone cameras didn’t exist in 1993, but I kept my subway ticket from the D.C. Metro as a reminder: 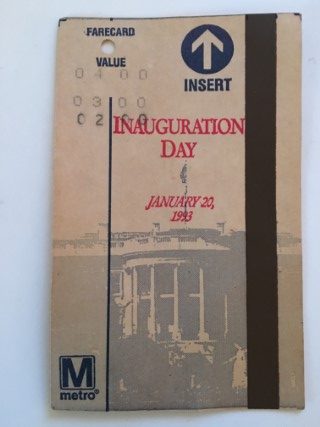