A recent New York Times article noted that the labor movement in the United States appears to be on the verge of a huge resurgence. The recent spate of union organizing campaigns at Starbucks, Apple, Amazon and many other employers lends credence to this proclamation. NLRB statistics also prove this to be true. The April 2022 Daily Labor Report noted that union representation petition filing increased by 57 percent over the previous year. During the same period of time, unfair labor practice charges against employers increased by 14 percent. The increase in union organizing activity is not surprising given the fact that a recent Gallup poll indicated that almost 70 percent of Americans now approve of labor unions.

What is even more remarkable is that these organizing campaigns have for the most part been successful. For instance, employees at over 300 Starbucks stores have been formally organized and have filed union representation petitions. More than 150 of these stores have had unions certified as their employees’ exclusive bargaining representative. One of the largest Amazon warehouses has been successfully organized after several thousand employees sought union representation. Further, Actor’s Equity, emboldened by successful organizing efforts in other industries, has relaxed its stringent membership eligibility requirements in an effort to organize new shops- such as the actors and stage managers on the non-union national tour of the musical Waitress.  It has been noted that Actors’ Equity’s new organizing activity represents one of the most significant developments in labor organizing within the theater industry in over twenty years. The present level of organizing activity has not been witnessed since after the Great Depression in the 1930s. Why has this resurgence occurred?  There have been a confluence of factors in today’s world that have made the environment fertile for union organizing campaigns.

First and foremost, we must recognize that Covid is a substantial contributing factor. Former NLRB Chairman Mark Pearce said that the pandemic was the wakeup call or the catalyst that prompted the question: is there another way to work and live? Workers who were most vulnerable during the pandemic were not only scared — they were also pissed off. The pandemic focused these employees on the fact that many employers were simply not interested in providing a safe environment for their employees. They learned that union organizing was the best means to curb employer indifference.

Next, the political environment has contributed to organizing efforts since it is much more favorable to the labor movement than it has been in recent years. President Biden has vowed to be the most pro-union president ever. He has revamped the structure of the NLRB and has been a vocal proponent of the Protecting the Right to Organize Act, which if passed would be a game changer for union organizing. The current labor board is seeking additional protections for union organizing efforts such as limiting captive audience meetings and advocating for the revival of the Joy Silk Mills doctrine, which would authorize the NLRB to issue a bargaining order without requiring a union representation election in situations where a union can present evidence of majority support.

The media attention that has been focused on successful union organizing campaigns has fueled further organizing efforts. Successful organizing is contagious. This has been evident with the huge volume of organizing that has occurred among the Starbucks baristas. Social media has made it easier for employees to communicate with each other and thus organize and build coalitions. Employees see from social media that they can take control of their workplace to make an impact on their terms and conditions of employment. They have learned that there are means to make their workplaces better.

Employees have also developed new paradigms for organizing. They are no longer reliant on professional union organizers to collect union authorization cards and file representation petitions. Many are being proactive and learning from each other how to organize and file petitions on their own. The old model of organizing was a time consuming top down process. Currently, worker to worker organizing has shortened the process. This is one of the reasons why the Starbucks campaigns have been so successful in such a record period of time.

Local 802 members must learn from these recent examples and emulate them. Like the Starbucks employees, musicians should take a leadership role in organizing their workplaces. While Local 802 now has an organizing staff, the best means to organize a non-union employer is for the employees themselves to initiate the process. The union is a tremendous resource that can help guide these efforts, the most effective and potent way to unionize is for the employees to learn, understand and implement the organizing process. We are here to help this process. 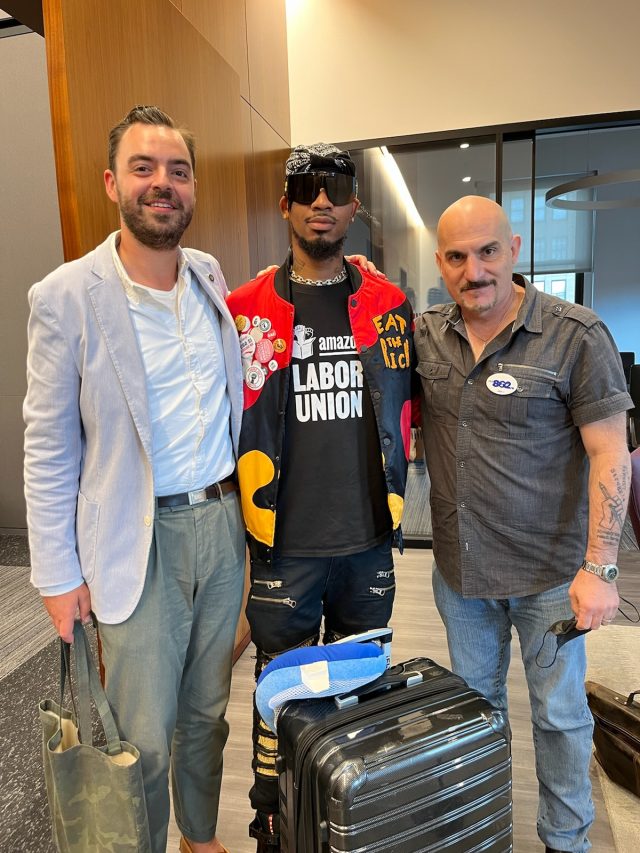 GOING FROM STRENGTH TO STRENGTH

In the spirit of today’s union resurgence, Local 802 is indeed rebuilding, and resultantly, we must reimagine our role within the larger movement. Harvey writes above that the nation hasn’t seen such activism since the high time of organizing, the 1930s, when President Roosevelt signed the National Labor Relations Act and stated publicly that if he were employed otherwise, “the first thing I’d do is join a union!” And while Local 802 was a powerful arm of those Depression-era and World War 2-era organizing campaigns, and stood strong for decades after, we are now faced with a rare opportunity to go from strength to strength.

As the union’s still fairly new organizing director, my meetings with Harvey, the other officers, Executive Board and members, helped me to forge a plan — really more of a philosophy — on the task.  Here’s what we’re working on, broken down into categories:

Comprehensive new organizing, including performers of music genres previously overlooked including indie musicians within free jazz, rock, hip hop, folk, and those of the wider avant-garde.

Club Room renaissance. Now that the 802 building is fully open, we must make great use of our resources and the Club Room will become a space for earnest solidarity and creativity. Plans are already being laid for social and business membership meetings, speaking engagements from veteran and youthful Local 802 members, artists of note, and panel discussions on the racism, sexism and homophobia which still lingers in the music industry, as well as other pressing matters.

Local 802 heritage exhibit. Recently, I created imagery depicting an array of past members within jazz, pop, rock and folk music under the heading: “Hey if you had such a family album, you’d have bragging rights too.” It will soon appear in several publications, followed by another with the vast assortment of celebrated classical and theater musicians. This led to the vision of a veritable gallery exhibit, to be housed here at 322 West 48th, which tells our century-long story.

There’s more. Let’s re-establish our referral service, reconstruct the Justice for Jazz Artists campaign, and build partnerships with community arts educational programs. And why shouldn’t we develop a visiting arm of Local 802 to speak at colleges, community centers and performing arts high schools? The possibilities are endless when the union — and its membership, shoulder to shoulder with staff — can feel the reinvigoration and reimagine what we can be.