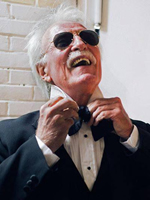 The exceptional alto saxophonist and exceptional human being Chuck Wilson passed away last Oct. 17, 2018 after being a member of Local 802 since 1979. He’s been on my mind lately, and I thought I’d share these few thoughts about him.

I moved to New York City in February 1983. My wife Laura joined me shortly after that; we were married in Manhattan, where our son Andrew was born four years later. We met Chuck through our friend, the brilliant guitarist Howard Alden. Howard and I wanted to revive a quintet we’d been rehearsing back in southern California. Howard thought Chuck would be the perfect choice for the alto sax chair. Howard of course was right, and Chuck was a mainstay of the Howard Alden/Dan Barrett Quintet for the decade or so of that group’s existence, from the mid-80s through the mid-90s. (Frank Tate was our bassist, and Jackie Williams our drummer. We got to be known as the “ABQ.”)

The ABQ played often at clubs in and around NYC and at jazz events around the country. In our heyday, we traveled to England, Ireland, and Europe, and recorded two CDs for Concord Records (and one for Arbors Records) during our time together. The iconic swing-era trumpeter and arranger Buck Clayton composed no less than 26 originals for the band, several of which are featured on our recordings. It was an exciting time for all of us.

Prior to that, I’d only known Chuck as a lead alto sax player. I knew nothing of his ability to improvise! It turned out he improvised beautifully, with the same singing sound, swinging time, and spot-on intonation he had brought years before to the lead alto chair in Jerry Gray’s band at the Fairmont Hotel in Dallas. After that, he played for Buddy Rich (with whom he got along very well). In New York, Chuck and I wound up together with several other friends in Benny Goodman’s last big band, and also saw each other (and Howard) in Buck Clayton’s Swing Band during the same years. Chuck was one of those rare big band alto players who brought sax sections together by dint of his musical authority and consistency. He never thought “LEAD” alto should ever be spelled “LOUD” alto.

He was a funny, classy guy. I wish I could have let him know how much I learned from him about both music and life. Whatever I learned, though, was only a fraction of what I could have learned had I simply been more receptive at the time, for in addition to everything else Chuck could be a subtle teacher, with a disarming, Zen-like approach.

So many funny things happened and were said while we were in each other’s sphere it’s hard to narrow it down, but I remember one episode that also gives an idea of his extraordinary musicianship.

We were in a Manhattan recording studio, recording the soundtrack for the 1996 Woody Allen movie “Everyone Say I Love You.” Dick Hyman had composed and arranged the music for a large studio orchestra. I remember  John Frosk and Randy Sandke in the trumpet section; George Masso and I were two of the trombonists; Ken Peplowski was alongside Chuck up in the sax section; and the rest of the huge orchestra was peppered with members of the New York Philharmonic on their day off. I hadn’t done a lot of this kind of recording, and I was as nervous as a pregnant nun!

Along the way, we had to record backgrounds for various actors who were featured in the production. I remember Alan Alda and Goldie Hawn being especially warm and friendly toward all of us. They would come out into the recording room before and after their takes to say hello, compliment us, and share a few laughs. (Incidentally, they both sang very well, as you can hear in the film).

There were many cues to record, and there were a few technical problems in the booth that day. The clock was ticking, and I recall it was one of the few times I ever saw Dick Hyman less than cool, calm and collected. Toward the mid-afternoon, he was showing signs of strain. We were headed for overtime, which the producers wanted to avoid if at all possible.

For one cue, Dick had composed a diabolically difficult passage for the sax section, rife with 16th notes written in oddball rhythms. At Chuck’s behest, the saxes rehearsed it slowly by themselves, gradually increasing the speed until they played it perfectly at the required tempo.

We tried a take. It was aborted because of a snag in the control booth. We tried another take. Someone sneezed, or something. The take was stopped. Dick looked over his shoulder at the clock, and was visibly concerned.

“Come on, ladies and gentlemen! We’re behind! We really have to get this completed before the next break. One more, please! Let’s do this!”

The next take was slated. Dick gave us the downbeat. The orchestra had never sounded better! It seemed that Dick had galvanized everyone into a great performance. There was a modulation, and then, there it was: the tricky sax passage. The guys all sounded terrific, executing those 16ths perfectly, until…

In the middle of that particularly nasty passage, Chuck played an altissimo 16th note. It was way off the horn, out of the alto’s natural range. Not a “squeak” – just a very high note that obviously hadn’t been written.

Dick froze. He stopped waving the baton, and glowered down at Chuck. The whole thing came to a halt. There was some clamoring in the room, and I heard voices and muttering all around me. Immediately in front of me, I saw Chuck put his alto back on its stand. He bent over, and put his face in his hands. His ears and the back of his neck were bright red, and his shoulders were lurching up and down. He was actually silently laughing!

“What the hell happened?” Dick said. He didn’t shout, but he was very upset now – maybe the only time I’ve ever seen him like this! He had directed the question at Chuck.

Chuck shook his head, his face still in his hands. He motioned for Ken Peplowski to respond. Ken started laughing as well. “Come on, fellows! What’s going on?” Dick asked again. Exasperated.

Ken caught his breath. He pointed to Chuck, seated next to him. “He…he…ha, ha! He played a FLY!”

Ken went on. Chuck was still too embarrassed to speak. Ken said, “A little fly landed on Chuck’s part, just where all those sixteenths were written. Chuck PLAYED it! He PLAYED it perfectly! He played the fly!”

Chuck finally looked up, shrugging his shoulders apologetically. “I’m sorry, Dick,” he said in his low Texas drawl. “I thought it was a high F-sharp!”

Everyone in the room burst out laughing, including Dick himself. After a moment, he said, much calmer now, “All right. Is Mister Fly off the page now? Does anyone else have any insects on their parts? Can we please play this cue for keeps this time?”

And we did. No overtime that day.

I’m glad I got to know and play with Chuck Wilson. I won’t forget him. Nor will anyone lucky enough to have known him, or to have heard him play.

Oh, yeah: One day, Chuck showed up for an ABQ rehearsal with a new haircut. His graying hair was styled a little differently than before. (Don’t forget: it was the 1980s!) Howard, kidding him (as we all did each other, all the time), said, “Geez, Chuck! You look like a damn weasel!”

Frank, Jackie, Howard, Chuck and I all laughed. The name stuck.