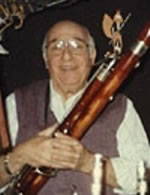 Marvin Roth, 97, a longtime Broadway wind player and a member of Local 802 since 1946, died on July 9. Over 42 years, he played in 24 shows, including “Guys & Dolls,” “Carnival,” “Mame,” “Gypsy” and the entire run of “A Chorus Line,” where he doubled on bassoon, baritone sax, clarinet, contra bass clarinet and flute. He played in many diverse genres: opera, ballet, jingles, radio work, and live TV, to name a few.  Mr. Roth studied music at the University of Miami, but left in his junior year to enlist in the Air Force, where he played in an Air Force band during World War II. Later, he joined the Boyd Raeburn big band before moving to New York and starting his Broadway career. Mr. Roth taught bassoon, saxophone, clarinet and flute privately for decades, and he was active in New York music education and outreach programs. In the 1970s, he wrote three books on bassoon duets and melodic studies that are still in circulation today. Mr. Roth loved making people happy through his music. He is survived by his daughter Rhonda Lubin, daughter-in-law Fran Roth, son-in-law Mark Lubin, and grandchildren Julie Lubin Rogove, David Lubin and Jessica Roth.