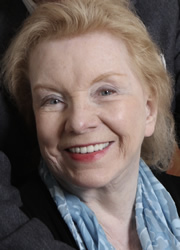 The music world lost a beloved concert violinist, pedagogue and humanitarian on Jan. 10. Shirley Givens, 87, had been a member of Local 802 since 1953. She was known throughout the music world for her great work teaching generations of violinists and musicians. Years ago, at the JISA International Festival in Victoria, Canada, I had the lovely chance to spend a summer performing with Shirley and her husband, fellow Local 802 member Harry Wimmer, the excellent cellist and conductor. Shirley was an astute musician with impeccable taste. She exuded warmth and love toward her students and it seemed as though they were all members of her family. (Some of her outstanding former students are Joey Swenson, Pamela Frank, Joseph Lin and David Kim, to name but a few.)

Born in Canton, Ohio, Shirley was only 11 when she performed the Mendelssohn concerto with the Canton Symphony Orchestra as her concert debut. Later she studied at Juilliard with Ivan Galamian and the original Juilliard String Quartet. She became quite well-known thanks to nationwide appearances on TV, which resulted in a “command performance” at the White House for President Eisenhower. Shirley taught at Juilliard, Mannes, the New School and Peabody. She was also a long-time faculty member at the Aspen Music Festival and director of the first Aspen Festival String Workshop, whose participants included Dorothy DeLay, Itzhak Perlman and Isaac Stern. Her students won major competitions and performed in master classes taught by Milstein, Perlman, Stern and Zukerman. Her 24-volume “Adventures in Violinland” book series, which she wrote and illustrated, is still extremely popular among young violinists and is considered a highly innovative work.

Besides her husband Harry, Shirley is survived by her children Tiana and Kevin and grandchildren Alice and Malcolm. A befitting memorial celebration is being planned in the next few months. The family has established the Shirley Givens Fellowship through the International Chamber Orchestra of Puerto Rico, which brings together young artists to perform and educate under-served communities throughout the island. Donate at www.internationalchamberorchestrapr.org/donate. Please write “Shirley Givens Fellowship” in the memo area of the form.