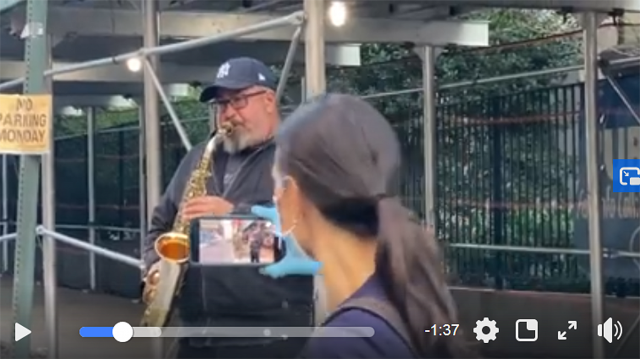 Local 802 member Matt Hong played a solo sax rendition of “When the Saints Go Marching In” during a shift change at Mt. Sinai Morningside hospital. The performance was caught on video (screenshot above) and went viral. Watch a clip here.

My wife, Diana Velazquez, is a charge nurse in the ER at Mt. Sinai Morningside. The FDNY lined up every night on their block to blow their sirens and applaud the healthcare workers during their shift changes at 7 p.m. Diana asked if I would come one night to play the saxophone and cheer on her staff, so on Wednesday, April 8 at 7 p.m., I put my horn together on the sidewalk across the street from the ambulance bay and ER entrance, and played “When the Saints Go Marching In,” as the staff came out to enjoy the celebration of their service. Trombonist Dion Tucker inspired me to choose that song after he started his #SaintsForSaints movement on Facebook, calling on musicians to play that song out their windows during the shift change cheering that had been going on all around NYC. I was just happy to play for people again, after so much time in isolation. I was also happy to be able to use music to express my gratitude for the gut-wrenching hard work all the healthcare workers do for all of us. My wife Diana happened to record the scene as it unfolded, and it seemed to strike a nerve, because her video got a ton of hits on both the Mt. Sinai Morningside and Local 802 Facebook pages. If the video gave people a reason to smile and feel better, however briefly, during this difficult time, I’m happy that I got the opportunity to be in it. Watch the clip here.

Saxophonist Matt Hong, a member of Local 802 since 1996, graduated from Harvard University and earned a master’s degree from Manhattan School of Music. He tells Allegro that he’s waiting for his gig at Broadway’s “Moulin Rouge” to reopen with a flourish, a big bang and a loud cymbal crash.