In Roman mythology, Janus is the god of beginnings, gates and doorways. He is typically pictured with two faces, one looking backwards and the other facing forwards. It is ironically fitting that Mark Janus is the name of the worker who has sued his union, a case which is now before the Supreme Court.  With this case, we have two possible outcomes, just like the god Janus. One face looks forward into a bright future where public sector unions continue to grow their ranks. The other face looks backward, into a dark place where public sector unions have to fight to survive – or possibly perish. 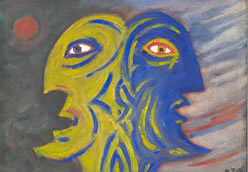 Janus is the two-headed Roman god and also the name of a case before the Supreme Court that could seriously damage public sector unions. Art: “Janus” (watercolour by Tony Grist)

Mythology aside, Janus vs. AFSCME represents one of the most important cases involving organized labor in decades. What’s at stake in this case is the ability of a public sector union to collect a specific kind of fee from workers, which I’ll discuss below. The stark truth is that without this income, many public sector unions will not have the financial resources to survive.

Let’s back up and review the basics. First, everything I’ll discuss in this article is about public sector unions, which represent government workers, teachers, police officers, fire fighters and the like. Private sector unions like Local 802 are not covered by the Supreme Court case at hand.

The crux of the matter is the following. In a majority of states, all public sector workers are required to either join their union or pay an equivalent fee to the union (called an agency fee) if they decide not to join. In the case at hand, the Supreme Court will decide whether these mandatory agency fees are constitutional. If the Supreme Court decides that unions don’t have this right to collect agency fees at all, then workers can become “free riders.” They will be able to enjoy the benefits of a union without paying for it. To me, this is comparable to individuals enjoying the benefits of living in the United States without paying taxes.

All of this almost came to pass in 2016, with a previous case I wrote about called Friedrichs vs. California Teachers Association. The union “won” that case only due to the untimely death of Justice Antonin Scalia, resulting in a split Supreme Court.

The law on the books that currently supports mandatory agency fees is Abood v Detroit Bd. of Education, 431 U.S. 209 (1977). In Abood, the Supreme Court held that it was proper for public sector unions to charge non-members an agency fee as long as those fees were relevant to union-related expenditures, such as contract administration, collective bargaining and grievances. The court ascertained that the First Amendment did not bar such arrangements so long as employees were allowed to opt out of paying for services unrelated to bargaining and traditional representation functions. Thus, a union may not compel a non-member to contribute to the campaign of a political candidate whose political agenda and beliefs they do not share. However, in that decision, the Supreme Court did not address whether the agency fee arrangement itself violated the First Amendment by compelling public sector employees to associate with a union they did not wish to join.

In 2014, in Harris v. Quinn, 134 S. Ct. 2618 (2014), the Supreme Court held, by a five-to-four majority, that home care attendants who were employed by a quasi-public employer (a private agency receiving governmental funds) could not be compelled to pay agency fees to the union. There, the Supreme Court found that the state laws mandating that employees pay agency fees did not apply to this segment of employees because they were not employed in the public sector. That decision in and of itself was not unexpected and is in a sense limited to the facts in that case. However, Justice Samuel Alito wrote a dicta (a non-precedential opinion) that questioned the constitutionality of the agency fee. This decision was an invitation to litigants and special interest groups to request the court to reconsider Abood. That invitation was accepted by several right wing pro bono law groups.

And now, once again it is the First Amendment that has come up in the case before the Supreme Court. Technically, the litigant Mark Janus is saying that mandatory agency fees violate his First Amendment rights, by forcing him to associate with an organization (his union) that he doesn’t want to.

However, it must be remembered that the First Amendment’s provisions are not sacrosanct. If there is an important interest served by the imposition of the agency fee by the union, state laws dictating their payment can and should be found constitutional. Clearly, preventing workers from becoming “free riders” is a very important interest that could justify these statutes. Whether the majority on the court will agree on this approach is anyone’s guess, but the fact that Alito wrote the majority opinion in the Harris case is foreboding. Equally disheartening is the guess that Justice Neil Gorsuch is likely to vote in favor of abandoning this precedent.

There is another subtle argument at play. The Supreme Court could decide as part of this case that public sector unions can’t charge any worker for money related to the union’s political action work (or any non-representational work) unless the worker opts in. A ruling in this regard may ultimately lead to other cases that could affect private sector unions (like Local 802) in the future. It’s obvious that enemies of the labor movement see the political work of unions as a threat.

There may also be a legislative response. Some states are considering permitting “members only” collective bargaining agreements that say that only union members can be covered by a union contract. So workers who choose not to join the union would also not enjoy the benefits of the union contract. This of course could lead to divisiveness in the workplace and fractured bargaining units. Other states, such as New Jersey, have legislation that allows employers (rather than employees) to pay for the cost of running a union. That certainly is an option, but very few states will avail themselves of it.

In summary: if Mark Janus wins his case at the Supreme Court, will it mean the sudden death of public sector unions? The fate of the labor movement has always rested in the hands of workers and activists. Unions must always find ways of justifying their existence so workers are drawn to join rather than compelled to join. Like its Roman namesake, we must view the Janus case as a new beginning, a door to pass through and a portal to traverse.

The Janus case will be argued before the Supreme Court on Feb. 26.