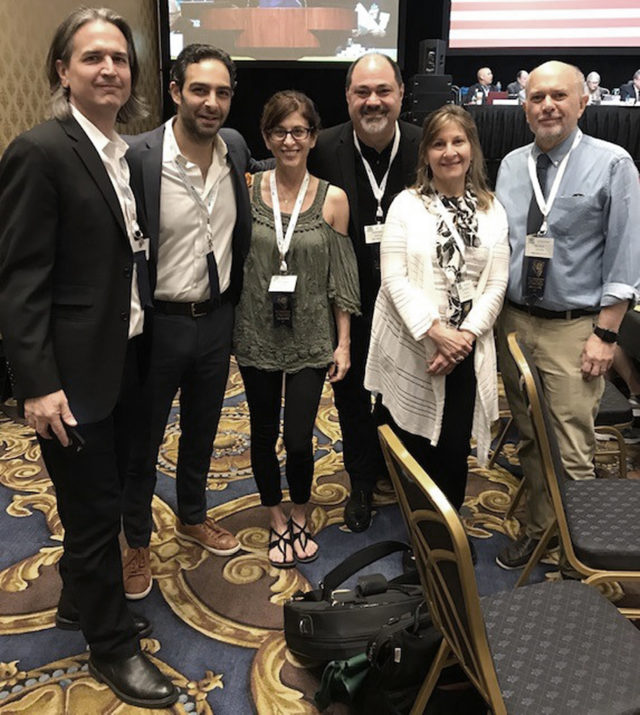 It’s been a busy nine months in office. We stabilized the 802 Health Plan, negotiated a new Broadway contract with the largest economic gains 802 has seen in decades, restored fiscal responsibility to 802’s budget, re-energized organizing, moved decisively on anti-harassment initiatives, nurtured relationships with other entertainment unions, and aggressively responded to the coming pension cuts by creating the first 401(k) program for two of our largest bargaining units.

Our administration is encouraged by the progress Local 802 has made since January, and our early success proves that with energy and hard work, our union can change for the better. This positive change is the product of increased member engagement, along with hard work by the 802 staff and administration. I want to sincerely thank all 802 members and staff for their contributions over these first nine months.

BROADWAY: We negotiated a landmark Broadway contract which included the largest economic gains 802 has seen in decades. In addition to the 23 percent increase in health contributions mentioned above, we secured a 3.5 percent wage increase for each year of the contract and a new 401(k) retirement plan option. The bargaining unit overwhelmingly ratified this new agreement.

RADIO CITY MUSIC HALL: Musicians playing at Radio City ratified a contract with 2.5 percent wage increases for each of the three years of the contract term. Additionally, split-chairs will receive a 23 percent increase in health contributions over the course of the contract. Finally, all Radio City musicians will have the option to participate in the new 401(k) plan.

ORCHESTRA OF ST. LUKE’S: During negotiations we solidified 3 percent wage increases for each year of the contract. Health benefits contributions will increase by 13.5 percent for performances and 26.5 percent for rehearsals over the contract term.

NOT-FOR-PROFIT OFF BROADWAY: We started negotiations with not-for-profit Off Broadway theatres to combine several collective bargaining agreements into one. It’s an ambitious project and negotiations are ongoing. We hope to reach a tentative agreement before the year is up.

OTHER AGREEMENTS: In addition to these larger agreements, we negotiated successor agreements for the Kaufman Music Center faculty, Children’s Orchestra Society, New York Scandia Symphony, Riverside Symphony, Hora Decima Brass Ensemble and 92nd St. Y-Jazz in July, as well as an initial agreement for the Kaufman Music Center accompanists. We also negotiated a settlement that paid musicians overtime from a 2016 engagement at the United Nations.

Shortly after taking office, we learned that the 802 Health Plan lost $2.7 million in the last fiscal year. The Health Plan actuaries were predicting that the Health Plan would run out of money by December 2021.

We immediately responded by proposing changes to the benefit structure, focusing on encouraging members to use in-network benefits as opposed to out-of-network providers. We stood strong to negotiate major increases in healthcare contributions from Broadway: 23 percent over the next three years. Absent this 23 percent increase, the Health Plan would have had to drastically cut benefits and restrict access to members.

Increasing Broadway’s health contributions was one necessary component of our plan to stabilize the health plan. We have also significantly increased employer contributions at Radio City Music Hall (23 percent), NY Pops (5.56 percent for performances and 15.82 percent for rehearsals), and St. Luke’s (13.53 percent for performances and 26.50 percent for rehearsals). Across the board, we’ve sent a loud and clear message to management: heath care is a human right that employers have a responsibility to provide to the musicians they employ.

Keeping our operating budget in balance is a top priority for this fiscal year. 802 has operated at a deficit for the last four years and we view 2019 as an important year to get back on track. If 802’s books are not balanced, it compromises our ability to do anything else. When we came into office, we created a balanced budget and are taking steps to stick to that budget as much as possible. As of today, we are on track to meet this goal.

One of the biggest expenses in prior years has been the use of outside law firms. In 2018 alone, Local 802 spent over $640,000 on outside firms. This year, we reconsidered all of our legal options and established a relationship with a firm that meets both our financial and organizational needs. As a result, our legal costs will be a fraction of what they were in previous years.

The AFM-EPF initiated the process to cut our pensions and we have already responded aggressively on several fronts. First, we set a precedent by negotiating a new 401(k) option in our major new contracts, including Broadway and Radio City. This option will enable musicians to plan for the future without being entirely dependent on the AFM-EPF for their retirement security. We hope to secure this option in other contracts as they come up for renegotiation.

We asked the AFM-EPF trustees to appear before our local to answer members’ questions. Although the trustees refused our invitation, we plan to initiate a series of talks and lectures to educate Local 802 members on what is going on with their pension plan.

Finally, we introduced a resolution at the recent AFM convention that would have required trustees to bring much-needed investment and actuarial expertise onto their Board. This resolution was unfortunately voted down. However, this is a long-term struggle for all musicians vested in the pension fund, and we do not intend to drop this important issue that we know is a priority for many 802 members.

In January, musicians received voluntary recognition at the Argyle Theatre in Babylon, Long Island after months-long discussions with management. We are excited that these musicians want to see their work at the theatre be union. Negotiations will start in September.

We supported musicians of the Distinguished Concerts International New York (DCINY) Orchestra to unionize. By July, we reached a strong majority of DCINY musicians demonstrating their desire to have their work covered by a union contract and we filed a petition with the National Labor Relations Board to hold a union election this summer. On Aug. 16, the ballots were counted, and musicians voted overwhelmingly in favor of unionization. Musicians who took part in this brave effort will write about their campaign in the next issue. This had been an elusive organizing target for 802 for the past decade. I could not be prouder of the courageous DCINY musicians who deserve all the credit for this effort. 802 staff and administration were here to support the DCINY musicians, but the musicians were the driving force behind their campaign and will continue to be.

We also organized a successful rally at Lincoln Center in support of the Chicago Symphony strike. Over 150 musicians from the many musical genres that 802 represents attended to show their support. A highlight from the rally was a performance by over thirty 802 musicians from the New York Philharmonic, Metropolitan Opera Orchestra, New York City Ballet Orchestra, and various other 802 groups.

The Director of Organizing was promoted to Chief of Staff. This promotion signals a commitment from this union to prioritize organizing in every facet of this organization. We recognize that in order to attract more members and get more work under contract, we need an organization that doesn’t just confine organizing to a siloed department, but instead values organizing as part of its culture.

We have defined our long-term organizing strategy, #802Strong, which we rolled out at the February membership meeting. We know we need to grow our solidarity both across genres and beyond the confines of individual collective bargaining agreements to build the power we need as a union to effectively advocate for the needs of all New York musicians. This will be a long-term campaign, and we’re excited to have started it within our first six months.

In the same vein, the Indie Musicians Caucus launched a survey in an effort to begin identifying where 802 musicians are working that is not covered by a union contract. The survey is closing as of Sept. 4; we posted a link to the the survey on Facebook @Local802AFM. We’ll report on the results once they’re in.

In addition to the Indie Musicians Caucus, numerous committees are doing substantive work to build this union: the Jazz Committee, the Diversity Committee, the Artists’ Rights Caucus, the Anti-Harassment Committee, Women of 802, the Broadway Theatre Committee, the Green Committee, and the Negotiating Committees for each collective bargaining agreement. To every committee member, thank you for all your work and service to our union!

We integrated strategic communications strategies into our organizing initiatives. The success of the Musicians of Broadway website and the social media launch for DCINY demonstrate how effective this approach can be.

Our union magazine Allegro won the award for best labor journal in New York City in its circulation class by the Metro New York Labor Communications Council. In addition, we worked to enhance the diversity of the Allegro editorial board, bringing more, and different, voices to the table.

We responded to member concerns about the ad-based “802 Notes” by instituting a monthly events e-mail that is ad-free.

In April, we implemented a peer-to-peer texting platform to communicate with and mobilize our membership when we have an urgent call to action or important information that needs to be disseminated quickly. We tested it out for our rally to support the Chicago Symphony musicians, which confirmed how effective it can be as a mobilization tool.

We collaborated with the Anti-Harassment Committee to roll out the first-ever harassment hotline for 802 members, and have continued to work with the committee to propose a new anti-harassment and anti-bullying bylaw amendment to be voted on by the membership at our Oct. 23 membership meeting. (The text of the resolution can be found in this issue of Allegro on page 44 as part of the Executive Board minutes of Tuesday, July 30.)

IMPROVEMENTS TO THE BUILDING

While we are mindful of our budgetary constraints, we made some small but noticeable improvements to the building. We’ve given some attention to the Club Room by ordering new chairs and tables, and the Executive Board generously volunteered their time to give the Club Room walls a much-needed fresh coat of paint. At the request of the 802 Green Committee, we installed new filtered water dispensers throughout the building. Finally, we’ve upgraded our building’s security and will continue to phase in security procedures to meet standards in the area.

There’s still a lot to do before the year is up! Here are a few things currently in the works:

NEXT GENERATION INITIATIVE: We have begun work on a Next Generation Initiative to help rebuild our union’s relationship with younger 802 members and reach out to the next generation of New York musicians. We’re working to connect with as many college and conservatory musicians as possible to let them know the value of being part of the union.

802 RESOURCE CENTER: We’re compiling and curating helpful resources to better serve the business and social service needs of 802 musicians. We hope to launch the 802 Resource Center program in the fall.

DIVERSITY STUDY: We’re in the process of interviewing professional researchers who will oversee a diversity study of our membership. We are excited to undertake this important project at the request of the Diversity Committee, Women of 802, and numerous members who have expressed interest in better understanding the demographics of our union.

Over the summer, we focused on continuing negotiations for the not-for-profit Off Broadway agreement, supported DCINY Orchestra musicians as they voted in their union election and got ready to negotiate a first contract, and worked toward securing a first contract for musicians at the Argyle Theatre.