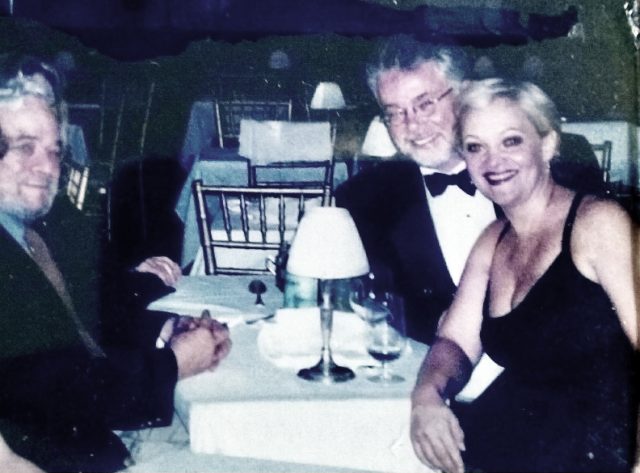 Stephen Sondheim, Nicholas Archer and singer Maria Friedman at the Cafe Carlyle in 2006

Working in a field where one is likely to meet some very talented and often famous people, the expression, “Never meet your heroes” may often apply. In meeting, knowing and working with Stephen Sondheim, it manifestly did not. I was lucky enough to meet one of my heroes.

I’d come across Steve’s lyrics when I was 14 and could sense the visceral character defining quality immediately. Later on, “Company,” “Follies” and “A Little Night Music” were like opening a door where the very sky was a different color and the air you breathed made you feel new things. Those born closer to 2000 rather than 1970 can’t appreciate just how different and revolutionary Sondheim’s music and lyrics were compared to what had come before. The use of language flawlessly tailored to characters both contemporary and historical, the clear hand of a composer — not simply a “songwriter” — at work in the tiniest detail, was extraordinarily appealing to me as someone who often wanted more than three chords and three guitars.

I was formally introduced to him through Jonathan Tunick when I was brought on board as associate conductor for “Passion” in 1994. I was struck by how amiable and humble he was. I’d describe him to others as the college professor everyone likes and wants to emulate.

He’d arrive for auditions and rehearsals alone. He didn’t have an entourage. And it was easy to notice that he was essentially somewhat shy. His manner with actors and musicians was always temperate and never overbearing or controlling. More often than not, he’d appear with that morning’s New York Times, which he’d often read between auditions or scenes. And of course there was always the crossword puzzle to be done.

Steve was always aware of his place in the theatrical cosmos and understood that his very presence in a rehearsal could sometimes put actors — how can I phrase this? — out of their minds. He was careful to be around when necessary but not to linger, since his talent, reputation and achievement made him an almost god-like, mythical creature. We all knew he was the best ever and we could never get used to it and just pretend he was another person on the creative team.

Sondheim was sometimes called the éminence grise who loomed over Broadway. I would disagree with that characterization. It’s quite easy to find many examples of Steve answering letters, sharing opinions and lending expertise to those who ask for it. He was as much a teacher as a composer.

He took considerable pride in what he did and expected others to treat his fellow creators with respect. Once, after an actress auditioned with the song “Once Upon a Time,” someone sitting behind the table with Steve asked who’d written the song and the actress answered “Charles Strouse.” Then silence. Steve then made a point to say, “And the lyric is by Lee Adams.”

Steve was erudite, gentlemanly and thoroughly knowledgeable without being pedantic or patronizing. This was unique in a business known to have more than its share of egomaniacs.

Steve often opened up his Turtle Bay townhouse to cast parties as well as professional meetings. When I was there, I notice it was about as close to comfortable perfection as possible. He called it The “house that ‘Gypsy’ built” because he was able to buy it with the proceeds from the sale of that property to Hollywood.

He had a splendid Baldwin grand piano given to him by his early collaborator Leonard Bernstein.

One show I worked on with Sondheim was what eventually was called either “Bounce” or “Road Show” depending on when and where you saw it. It had been kicking around in one version or another for years. Steve was known to call it “Dead Horse.”

While unfailingly polite and easygoing, he had the ability to push back should the need arise. He was known to propose legal action if a singer toyed with his lyrics in performance and on one show of his, an “arranger” brought along by a choreographer got a little too “creative” and was told by Sondheim, “My music doesn’t need any help.”

I worked with Steve as a pianist and conductor on “Passion,” “Putting it Together” and “Assassins” on Broadway and as arranger and pianist for an evening of his music presented at Cafe Carlyle with singer Maria Friedman. I was music director for “A Little Night Music,” part of the Sondheim celebration at the Kennedy Center in 2002. And, as a pianist, I was part of “Pacific Overtures,” “The Frogs” and the 20th anniversary reunion concert of “Merrily We Roll Along.”  I was also the music director for several workshops of “Bounce,” with Hal Prince directing.

And, despite all this, I was still completely in awe of the man’s talent, his extraordinary generosity of spirit and the fact that his words and music had kept me company through almost my entire life.

Stephen Sondheim gave us all so much to hear, to understand, to feel and so much in which to revel.

Thanks for finishing the hat, Steve.

Nick Archer, a member of Local 802 since 1970, has served as conductor, associate conductor and pianist at over 23 Broadway productions. Nick posted some more great Sondheim memories on his Facebook page.