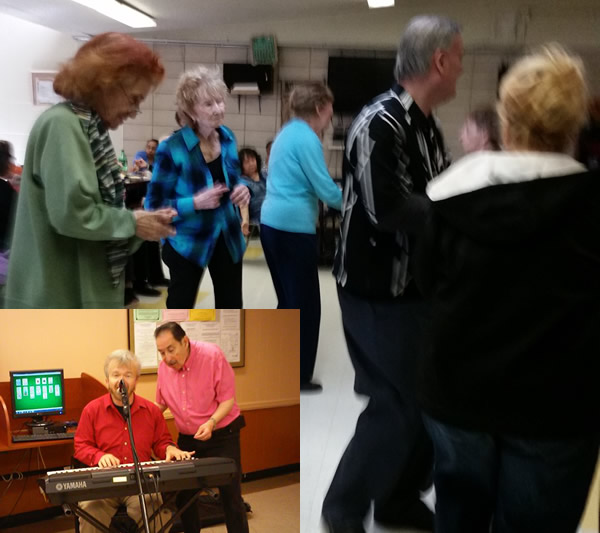 At left, Mark Doyle at the keyboard. Above, nursing home residents dancing and having fun to the music.

The phone rings at 8 a.m. on a Monday morning. “Can you get to Riverdale by 9 for a two-hour stroll?” I hang up the phone and jump in the car with guitar in hand. So begins another week as a nursing home entertainer, where I can be asked to do anything from a two-hour “strolling program” – where I stroll from dayroom to dayroom singing songs in up to three different languages – to doing a concert performance in an auditorium for the staff and residents. Most times my schedule is arranged well in advance but just as often as not I have to be prepared to do a full show with as little as an hour’s notice. With that in mind, my car is always loaded up and ready to go.

When I became a professional musician, I didn’t have a big career arc in mind. I was just in search of gigs that I could do well and have fun doing. After years of lessons and playing in various bands over the years, I drifted in and out of the business with no real game plan to speak of. So how did I get into this line of work? It all started when I moved back to the Bronx after living in Queens for several years.

A friend of mine who I re-connected with after moving back to my old neighborhood asked me if I would cover a Thanksgiving Day gig in a nursing home for him. I called the agent who sent me to Brooklyn to do the show. It went well, leading to more calls. Eventually, I was getting so busy that I decided to quit my day job in the stock market to do nursing home gigs full time.

It’s been 12 years since I left my day job and while it has been challenging at times, it has been a rewarding experience. Some of the most fascinating experiences have been my times entertaining Alzheimer’s patients. It really is interesting to experience that moment when you encounter a person who hasn’t spoken or been communicative for quite some time all of a sudden burst into song singing an old Gershwin show tune with you as their face lights up, remembering how they used to be. They seem to have re-connected with the world again, if only for that brief moment when you are in their presence playing the songs of their youth. It’s almost as if I turn on the light when I walk in the room. (But sadly when the music ends, they slip away again.)

Sometimes when I walk in, the crowd can be indifferent – or even aggressive. In that case, I consider it a challenge to change the temperature of the room by engaging with the people either in conversation or by taking requests. Usually, by the end of the hour, everyone is happy and in a good mood. One time while singing “All Of Me” in a nursing home in Brooklyn, I got to the lyrics “Take these arms/I’ll never use them,” when a woman called out, “Yes, you will, dear!”

What I like about the work is that it is always changing. I’m in a different room every day and it really reminds me on a daily basis of the tremendous healing power of music.

Even though this job is fun, I still experience the usual misconceptions about how music is a job. One time, after playing a big band show for a group of doctors (and after getting fed lunch), we were told, “What do you mean you want to get paid? We just let you guys share a six-foot hero sandwich!”

Still, I wouldn’t change my life as a nursing home entertainer because I get to do something I love to do, something I have done every day since the age of 11, and I get to make someone who maybe isn’t feeling too good feel a little better and forget their troubles for a little while. It may sound like a cliché, but it really isn’t. Sure, there are times when you don’t really want to get out of bed and “rev up the jolly,” but once you’re with the people and you get to witness the change in them, it is really an energizing experience for all involved and it puts me in a good mood for the rest of the day, or at least until I get stuck in traffic on the BQE or the Cross Bronx Expressway.

I’m thankful for all the experiences I have had doing the work and have made many friends over the years because most of the places I visit on a continual basis. Every person has their favorite song they request and that is my favorite part of the job because they will often request a song I have never heard of before. This forces me to go and learn something new and changes up the routine and makes it fresh for me as well. In fact, the majority of the music I do currently is vastly different than what I did in the beginning. Most of what I do now has come out of requests from the people I perform for and that really makes the show something that everyone can feel that they had a part in, making it better for everyone, hopefully. It’s hard enough for someone to be sick, or away from their loved ones, but, as musicians, we get to do something we love to do and, at the same time, make these people feel better and have a better attitude. Some people may look down on the idea of playing for patients in a nursing home, thinking that this isn’t what they had in mind when they began playing, but not me. My car is always loaded up and ready.

Mark Doyle has been a member of Local 802 since 1993. Members can submit stories to Allegro editor Mikael Elsila.