April is national organ donation month, and it’s a fitting time to remember an amazing connection between two Local 802 members. We’ll let them tell their story themselves. Meet Deryck Clarke and Mike Sayre… 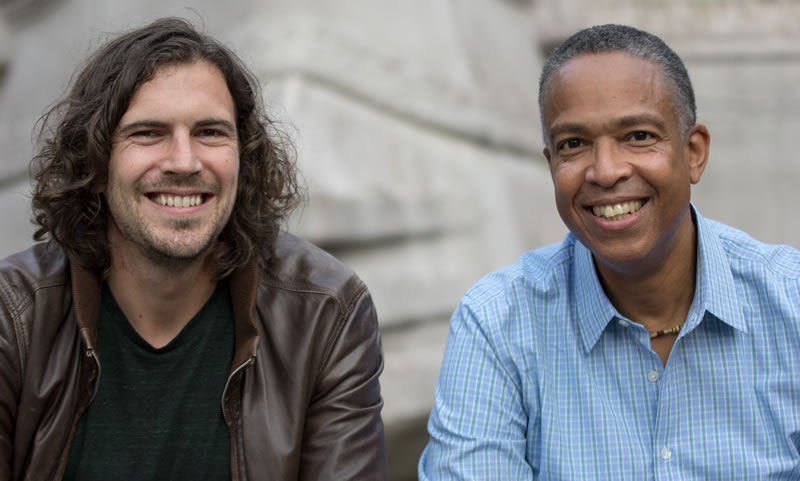 PART I: BY DERYCK CLARKE

“I’m a man on a mission. I am blessed. I am lucky. I have a special purpose. God has put me here for a reason.” Or so I’ve been told. What I do know is that I’m thankful for everything in my life and just happy to be here. And to understand why I was chosen to receive a second chance at life is above my pay-grade. Allow me to back up a bit.

I live in Jersey City with my wife and daughter. My wife is a college librarian at the Cooper Union. My daughter is a theatre major at Hudson County Community College. As a professional musician, I had been part of a multitude of different musical productions, and had been a proud member of Local 802 for over 30 years.

But I found my true passion as a music educator, or as I call it, an “arts education activist.” In other words, I dedicate my life to getting as many kids as possible inside a bandroom and learn how to make music.

I come from a family of immigrants from Guyana, and grew up in Brooklyn where I started playing music. I was exposed to music as early as I can remember. (Thanks, Mom!)

I wasn’t a great athlete, nor was I a Rhodes scholar. Music was not merely my ticket out but it also opened my eyes to see the greatness within myself.

I discovered my instrument of choice – the French horn – at 9 years old and things took off from there. I attended the High School of Performing Arts (now La Guardia H.S.), and the Curtis Institute, with degrees from the North Carolina School of the Arts and from the Mason Gross School of the Arts at Rutgers University.

When I was in the Army in the 1990s, I got deployed to Somalia. It was there where I discovered my purpose while visiting an orphanage in Mogadishu. These kids had no family, no home, nothing of material value – just themselves and each other. And with that they were able to make music, beautifully. They sang the Somali national anthem perfectly in tune – and then taught it to me. The sky had opened up and I said to myself, “Yup, this is it. This is my destiny.”

After I left the Army I dedicated my life to helping children learn music.

I was enjoying a nirvana of teaching music by day and playing gigs at night until illness threw my career into flux. I was battling a degenerative liver condition that had been in the works for much of my life as a result of previous illnesses, including liver damage from medication I was prescribed in college.

By 2007, I was diagnosed with primary sclerosing cholangitis, a rare and incurable disease that would eventually require a liver transplant. My health issues came to head in the summer of 2015 when while doing some household chores, I began to feel dizzy and lightheaded. After checking my blood, my doctor, gave me the dreaded news: I was in stage one liver failure. I was devastated.

Up until then, I had been on a roll,. I had started a nonprofit after-school arts education program. I knew that I could realize my dream of filling in the gaps that stand between a kid and playing music. I was also becoming an impresario, as I produced chamber music concerts and other shows.

Now all that had to be put on hold. I was in unfamiliar territory.

After a few weeks of depression and anxiety, a friend suggested, “Why don’t you put your story out there and share it with your family and friends? Let them know that you’re in trouble.”

So I did. After posting my story on Facebook, I immediately received numerous well wishes, prayers and offers of financial aid.

But it was Mike Sayre who reached out to me directly.

I knew Mike from Rutgers. He became an angel to me. He said, “Hey, man, I don’t have money but if you need a liver, I can help you out.” It seems funny in retrospect. I mean, what do you say to that kind of offer?

Not only that, but Mike may have saved my life twice. The doctors removed a cancerous polyp they discovered while performing the transplant. Miraculous.

I was in recovery mode for months. Now I’m back exploring opportunities for building music programs in schools (and after school).

I’m not a regular church-going person nor a member of any one faith, but I would be crazy to deny the existence of something greater than myself. And that greater thing wants me to keep doing what I do: sharing music with kids. Our country needs more creative thinkers from every demographic if we are to continue being a great nation.

The New Jersey Turnpike is not where I expect to make friends. But when I think back on it, that’s where my friendship with Deryck Clarke began. You could say we are an unlikely pair – he a Brooklyn-born Army vet and middle-aged son of Guyanese immigrants, me an Indiana boy scout come to New York to be part of “something big.” We both play French horn, and first met sitting in the back of the Rutgers orchestra when we were studying for our master’s degrees. Deryck would often give me a lift from campus into New York – either for a date with the woman I’d eventually marry, or for one of the gigs he’d helped me to get when I was first searching for a foothold in NYC’s music scene. It was on those car rides that we’d talk about life, creativity, music, politics – whatever. Those first few years, as I fumbled my way through big city life, he was a good friend to me. He’s been a huge part of my New York story, and two years ago, I became a permanent part of his.

When I met Deryck, he’d already been diagnosed with a rare liver disease caused by a reaction to antibiotics he took years ago. He didn’t talk about it much back then, but the condition had been slowly worsening, and in late 2015 he found out that his only option was a liver transplant. For a whole host of reasons, New York has one of the worst organ shortages in the country. To get a liver from a deceased donor here, you have to be very, very sick – running the risk that an infection or failure of other organs will strike before it’s your turn. So after thinking about it hard and talking to my wife, I decided to step forward as a living donor. I would donate 60 percent of my liver to replace his.

This is not without risk, of course. It is a major surgery. The recovery is painful, and both the donor and recipient are unable to work for a couple of months. It is a testament to Deryck’s character that I was not the only friend who volunteered. About 350 Americans made the choice to donate last year. Some even decided to give an organ to a random person they’d never met. They must all face the same fears and sobering questions I faced. Have I lost my mind? What if something goes wrong? How can I risk all the great things in my life – a budding career, a future family – no matter how noble the cause?

As part of their due diligence, Mt. Sinai provides a team of specialists who advocate only on behalf of the donor. They don’t interact with the recipient at all, to prevent any undue influence. Their job is to press every prospective donor to confront the hard questions honestly. They will not proceed unless the donor is medically, psychologically and financially ready. In the weeks that followed my evaluation, I admit that at times I seriously considered backing out.

When I’m faced with a hard choice, I remember an old boss of mine who used to talk about Kant’s imperative. I had to look it up. It’s a kind of cousin of the Golden Rule. Basically, choose what you wish everyone else would choose. After all, what is the world but the sum of all of our choices? In a world that can sometimes leave us feeling helpless, or alone or even nihilistic, I choose radical love. I choose a world where a friend is worth the risk.

Surgeons at Mt. Sinai performed the transplant on Sept. 13th, 2016. It went very well. I fully recovered and went back to playing my horn. I even released an album about climate change that I wrote while recuperating. Deryck adapted well to the liver – his road was a bit longer than mine. But he came back to full health as well. Incredibly, the liver can regenerate. In the end, we’ll both have fully-working livers when all is said and done. I owe a huge debt to my family and friends for their support. It couldn’t have happened without my wife Tracy and my parents.

I was raised in the Midwest, where health issues are usually private, and self-aggrandizing is frowned upon. But I’m telling this story as widely as I can because I hope it will inspire you. Since the donation, I’ve been thanked by so many of Deryck’s friends and loved ones. I’ve received tearful hugs from strangers and been told that I’m a special person. This has been heartwarming, and is all the thanks I need. But in a way, I’d rather people think that I’m not so special. I’m a lot like you. My family is a lot like yours.

Please, have a conversation with your loved ones about organ donation. Not everyone can be a living donor, but you can save up to eight lives – and improve dozens more – by registering to donate when you die. Visit DonateLife.org to sign up. It’s a good time to think about this, since April is national organ donation month.

One last thing. I’ve recently become involved in advocacy for the Living Donor Support Act. It would ease the substantial financial burden on living donors in New York, and is projected to save 1,000 lives in the first 10 years if passed. Learn more at www.waitlistzero.org.