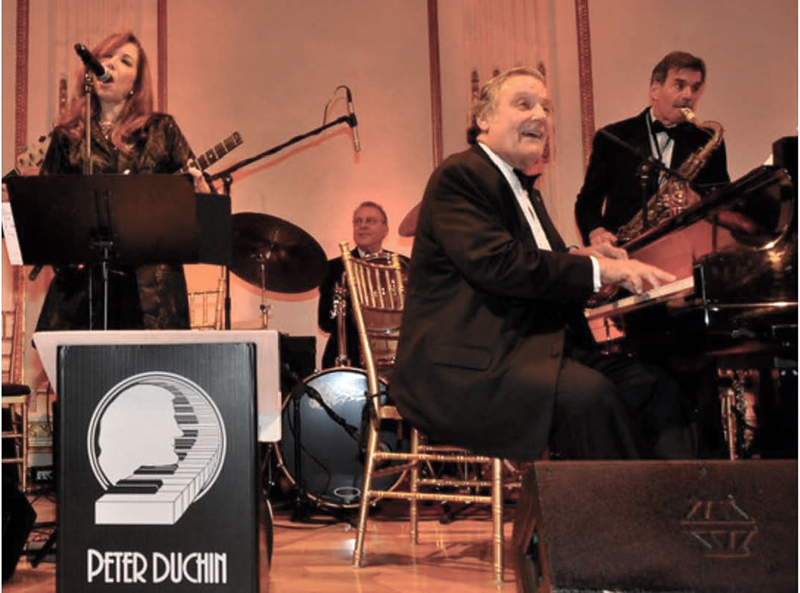 When I first started out in the club date field, there were a lot of club date offices in and around the New York area. My goal was to work with the top of the line, the best of the best, the Rolls Royce in this end of the music business. That meant, beyond a doubt, working for the Peter Duchin Orchestra. Last year, Peter, who has been a member of Local 802 since 1960, celebrated his 80th birthday. I’ve now had the honor of working for him for close to half of his life.

How do I begin to write about America’s top society bandleader, who’s been an expert witness to the constant shifts in social customs, who’s played some of the world’s most famous events and galas, such as Truman Capote’s famous Black & White Ball, which changed the blueprint of every major party given afterwards? How do I write about someone whose father had one of the most famous dance bands during the big band era and whose mother, the daughter of a socially prominent New York & Newport family, tragically died a few days after he was born? There are so many different facets of Peter’s life that I couldn’t possibly fit a fraction of it here in this article. I recommend Peter’s memoir, “Ghost of a Chance,” written with Charles Michener. Published in 1996, it’s quite a fascinating read. There is also the blockbuster 1956 Hollywood film about Peter’s dad, Eddie, called “The Eddie Duchin Story.” It stars Tyrone Power and Kim Novak and is one of those Turner Classic tear jerkers that’s well worth the watch.

Let me start by saying that Peter Duchin has been a member, signatory, and strong supporter of Local 802 for more than 50 years. He founded and built the Peter Duchin Orchestra, which came to be regarded as the best known and most successful high society band in the world. Peter also has always surrounded himself with the best musicians in town. Among them have been Joe Wilder, Benny Ventura, Joe Newman, Frank Foster and Mary Cleere Haran, to name a few. Here are some stories I thought I’d share with you about Peter’s very unique and interesting career. 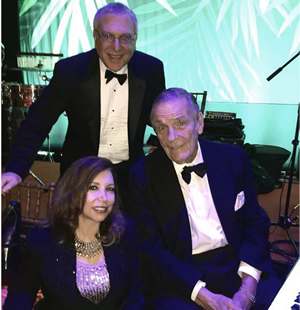 Peter Duchin at the piano with Roberta Fabiano and Barry Lazarowitz on the last gig at the Waldorf Astoria before it shut down last year for renovation.
Photo: Roberta Fabiano

THE ARMY AND THE ED SULLIVAN SHOW

After graduating from Yale, Peter served in the Army. He played the glockenspiel in the Army band and while stationed in Panama in 1959, Peter won an Army talent contest that got him onto the Ed Sullivan Show. That was his very first appearance on TV. I remember him telling the story of how Ed Sullivan played with his mind right before he went on the air: Sullivan put his hand on Peter’s shoulder and said, “Don’t worry son. There are only about 10 million people who will be watching you.” Peter said that his hands turned to ice! Nonetheless, he got a favorable review in the New York Times.

Duchin’s first steady professional gig started in 1962 at the Maisonette, a club in the St. Regis hotel. It was a huge success, and from there he started his own club date office with the help of Otto Schmidt, a sax player and clarinetist in Ted Straeter’s orchestra. In 1964, Peter and Otto found themselves putting together the entertainment for at least a dozen balls for Lyndon Johnson’s inauguration. Soon after, Peter played at the White House for the weddings of Lyndon and Lady Bird Johnson’s two daughters, Lynda Byrd and Luci. At Luci’s wedding, he had the first band to ever play rock-and-roll in the White House! Since that time, the Duchin Band has played every U.S. presidential inaugural through President Barack Obama.

Peter’s first recording contract was with Decca, which gave him a five-year deal, with the stipulation that Peter release two albums a year. His first album was called “Presenting Peter Duchin,” and the arranger was Henri René. Released in 1962, it sold well over 100,000 copies. Since then, Peter has released more than 20 albums, with Decca and with Bell, Capitol and Columbia House.

One of the things I’ve always admired about Peter is that, unlike many other club date band leaders I had worked for in the early years, he has always had a way to bring a higher level of respect to this (almost forgotten) end of the music business and he also always commands respect for himself and his band members from his clients. Many of Peter’s clients have been and continue to be his personal friends – friends from the old money, high-society world to the movers and shakers in politics and business. The first time I ever saw and heard Peter was in 1981. It was in Washington, D.C. at one of the Kennedy Center’s Lifetime Achievement Awards after parties. Count Basie, Cary Grant, Helen Hayes, Jerome Robbins and Rudolf Serkin were being honored. I was there as a guest and he was performing at one end of the foyer, while Count Basie was performing at the other end. I marveled at his vast repertoire! 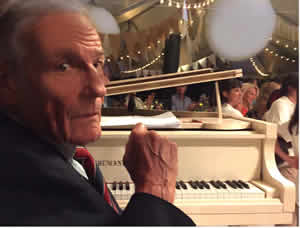 I have always been so impressed by Peter’s road chops. I remember one of the first times I had to meet him on the road. It was most probably my first long-distance traveling gig with the band. I was still freelancing at the time, and I had just finished a gig with Lester Lanin in London. Afterwards, I had to fly the next morning to somewhere in Texas to work with Duchin later that day. In the 1980s, traveling was so much easier, although still arduous. Peter’s client had provided him with the usual stretch limo and we had worked it out that he was going to pick me up at the airport. When I got in the car, he said he had just flown in from playing a party in Paris the night before and two nights before that he had just finished playing a string of parties and events in New York. Just to mention, most of these gigs were at least five to six hours long. European parties usually started in the early evening, when it was still light out and would end in the early daybreak. Quoting from Peter’s memoir, “Thirty years ago, it wasn’t unusual for a party to last until three or four in the morning. Arriving at a deb ball, I’d be told by the host to play ‘until it becomes light’ – lovely phrase – ‘so the kids can see their way to drive home.’” To top that off, after our job in Texas, he was flying the next morning to play somewhere off the coast of the state of Washington and, he said, after that he would probably need a coffin! I listened in disbelief. I couldn’t imagine someone traveling that much and performing so many one-night events in a row! Little did I know that I, too, would eventually get into that groove as well – flying “eight planes a week” (yes, pun intended). But no one has done it better than Peter. I still can’t believe how many people he knows and remembers so many details about each one of them. His social calendar has always been off the charts!

One of Peter’s main interests has always been a deep passion for education, specifically in the arts. A former vice-chair of the New York State Council on the Arts, Peter has also served many other cultural institutions, including the American Ballet Theatre, the Chamber Music Society of Lincoln Center, Friends of the Vienna Philharmonic, the Spoleto Festival USA, the Glimmerglass Opera, and the Citizens Committee of New York City. He truly believes in the union sending musicians into schools to motivate the kids to get interested in education. Peter has also long noted that whenever there are cuts in school budgets, the music department is usually the first to go. His son, Jason, knows this all too well and in 1994 started a charitable nonprofit organization known as “DreamYard” to help young people in the Bronx develop an arts and learning pathway (www.dreamyard.com).

THE PRESENT AND FUTURE

Currently, Peter’s organization is known as Peter Duchin Music, Inc. The office is doing well. Drummer Barry Lazarowitz keeps it all together as the office manager and also our road manager. Peter still plays on the Bechstein piano that was presented to his father by John Wanamaker. The future looks bright. We continue to play annual debutante balls around the country, fund raisers for important causes such as East Hampton’s Animal Rescue Fund, the Citizens Committee of New York, the Living Landmarks Annual Gala (Peter himself was named a “Living Landmark”) and many more. Oh, did I mention that Peter has also been in the movies? Look for him in “The World of Henry Orient,” “Working Girl,” “Jade,” and most recently, you can hear Peter and the band playing a few tunes in the new Steven Spielberg film “The Post,” starring Tom Hanks and Meryl Streep.

Roberta Fabiano has been a member of Local 802 since 1976. Personal essays and tributes are welcome in Allegro. Send an e-mail to Allegro.