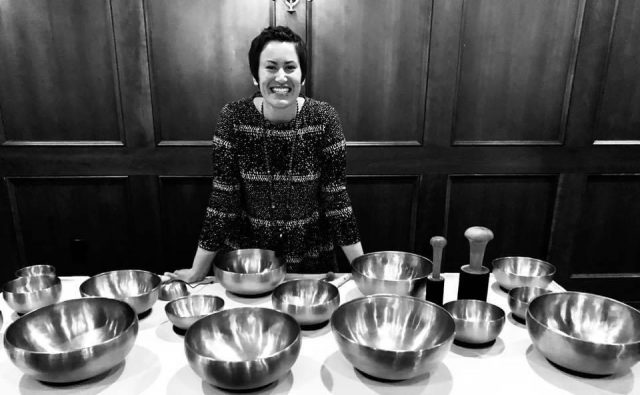 The first time I heard a singing bowl, I was an undergraduate student in conservatory and had been invited to a meditation by a musical mentor. This particular practice we attended was a Japanese tradition of Buddhism with chanting; to open and close the meditation, we struck a Tibetan-style singing bowl three times. As I became a regular practitioner, I began to experience the sound of the singing bowl as a call to attention. It was a loving invitation to go within myself to prayer; the bowl’s tones called me to explore our interior life. As a musician, I was taught to listen to the space between sounds, but the singing bowls served to open a new state of consciousness and reveal more profound depth of listening and feeling.

A decade later, I returned home after studying and working in Europe, where I had immersed myself in Austria’s classical culture. Adjusting to life back in NYC, I met a collection of dear friends and teachers who would encourage me to use the Tibetan bowls daily. I was wary at first as it was difficult to toggle between intense and intricately detailed classical compositions and the bowl’s simplicity. I didn’t yet see how the two worked symbiotically.

As I thought back to the Buddhist meditation from college, I started to incorporate a daily practice with a single singing bowl and a simple intention: to feel good. Little by little (with resistance on occasion), I began to experience the meditation’s profound calming and centering effects in my daily life. Whether teaching or performing, I felt a big shift in the quality of inspiration and energy I could offer others and sustain for myself. The bowls became more than a respite from a hectic freelance schedule but rather a progressive practice that helped guide the course of my thoughts and actions.

Eventually, my sound work led me to the nonprofit Helping Parents Heal, an incredible organization of loving parents dedicated to healing after the loss of a child. Each month, I would open the meeting with a singing bowl meditation. As I lead the parents in meditation, I saw first-hand the positive effects of vibration and Sound in their lives and how it encouraged peace and healing, and so too, did my own practice gain momentum.

That winter, I began working on my first Off Broadway show as the solo cellist for “The Winter’s Tale” at the Theatre for a New Audience. One rehearsal, while discussing music for the pivotal end scene when protagonist Hermione wakens from a cursed slumber, a few suggestions were made and rejected for the musical scoring to accompany the awakening. Then I suggested using three Tibetan bowls; the bowls would leave the audience without a concrete musical narrative, but they had enough historical significance to elicit reverence within a pivotal moment in the play.

I knew from my meditation experience that singing bowls create a sound that simultaneously invites attention and stillness. By using the bowls instead of a melody, the audience was not being led or influenced by emotion-provoking music. Instead, they were left to the depth and persistence of their own thoughts and feelings through the vehicle of three singular tones.

The narrative demanded that the audience listen and watch the character Hermoine’s awakening in a state of reverence and awe. The simplicity of the three tones (suggestive of mind, body, and spirit), the resonance of the large hall, and the set’s sacred space, created an environment in which miracles occur. The objective was for the audience members to feel the scene’s gravity from an intimate perspective and allow Hermione to “awaken” through the same vibrational resonance that is her origins.

My work at the Theatre for a New Audience enabled me to understand the connection between my performance life and my other passion: creating transformative spaces with sound. Each enhances the other in ways that are both authentic and useful. Creating an intentional space for others in meditation and creating a meaningful sonic landscape in a theatre are intertwined. Crafting Sound to blanket a theatre or meditation space is similar in feel and consequence: Both invite the listener to experience a new state of awareness.

In March 2020, while recovering from COVID-19, I struggled with a need for connection and comfort amid the uncertainty. I sought a way to share something that could be of service to myself and others. My criteria for sharing was this: something universal, something that felt good, something that took us away from worry and fear, and something that brought us back to basics. A traditional performance was off the table, but I was keen to remind my friends, through sound healing therapy, of sound’s superpowers: its ability to transform consciousness, reduce stress and anxiety, improve focus and concentration, and increase feelings of calm and relaxation.

Listening to music is a universal experience. Musicians make their living offering sound in many ways, weaving the notes and tones into magic. For centuries, sound has been used as a tool to celebrate, communicate, mourn, pray, reduce pain and discomfort and tell the story of human emotions (what we musicians love most). I compose works of both a sacred and secular nature using my understanding of space and vibration and my love of theatre and storytelling to create music that enhances a narrative and impresses the story onto the listener on a subconscious level.

In my practice, sound healing has no narrative but is intentional, and it takes the most challenging part of meditation, disconnecting from our thoughts, and makes it easier. The two keys to making meditation a daily practice are accessibility and ease; as one begins to incorporate meditation into a daily routine, there is no “need” to be unduly challenged during meditation (sound or otherwise). And when one begins with ease, one is far more likely to continue developing a meditation practice into a progressive and transformative daily ritual. Life, especially in today’s time, is stressful (no one needs to remind you, I’m sure). If you’ve tried other ways to relax with little success, sound healing may help. Some find meditation with singing bowls more accessible than traditional sitting meditation because the sound/vibration soothes the mind, making it easier to enter into deep states of calm.

I think it’s vital to emphasize what a state of calm offers. It may seem redundant to do so, as we can all envision what “calm” means for us. But today’s hectic pace devalues the idea of “calm.” Instead, all too often, a premium is placed on recovery after high periods of stress. What if, instead, the emphasis was placed on starting from a place of peace upon which to build? The hectic rush and overstimulation are over-glorified — so much so that it seems like a terrible idea to stop the fast pace for fear of losing momentum. Meditation enables us to heal that misconception and bring a return to center and away from knee-jerk reactionary responses. It also redirects our energy towards thoughtful, conscious action. A centered perspective is where the most authentic and transformational decisions are made, encouraging inspired action. A calm mind becomes a springboard for unbridled creativity in all areas.

A state of calm should not be mistaken for a state of complacency or resignation. Instead, it is a state of receptivity and creativity. The idea is to quiet the mind, ease into a state of acceptance, and move progressively toward a state of power and inspiration. Remember that the words calm, peace, contentment, and relaxation are not about recovery, complacency, or some form of resignation to the status quo but are instead a place of acceptance. With a calm and clear mind, you can more readily make decisions that align with your true desires. In a state of calm, you can resist being pressured into feeling, thinking, or doing. With calm as your starting point, the mind will be more apt to handle tension that arises and may more quickly diffuse stress than rubbing raw against it.

It is relatively easy for our western sensibilities to get tangled in the theory and idea of meditation or sound healing rather than experience it first-hand. I invite you to bypass theory and dive into the experiential. Enjoy a sound bath or similar experience for yourself, and once we re-open, seek out similar experiences in community with like mind individuals. There are boundless meditation and sound healing methods offered by a variety of practitioners and in a variety of settings. Find the practice that works for you, which brings you back to center and creates a calm state within you. Sound healing is a powerful tool that can heal wounds, develop connections, and open us to contributing the very best of ourselves to promote peace and find a world that celebrates the unique gifts we all have to offer. The practices we use to help us center ourselves, to reflect, and to grow also inspire authentic creation, and as such, will always support our day-to-day work. 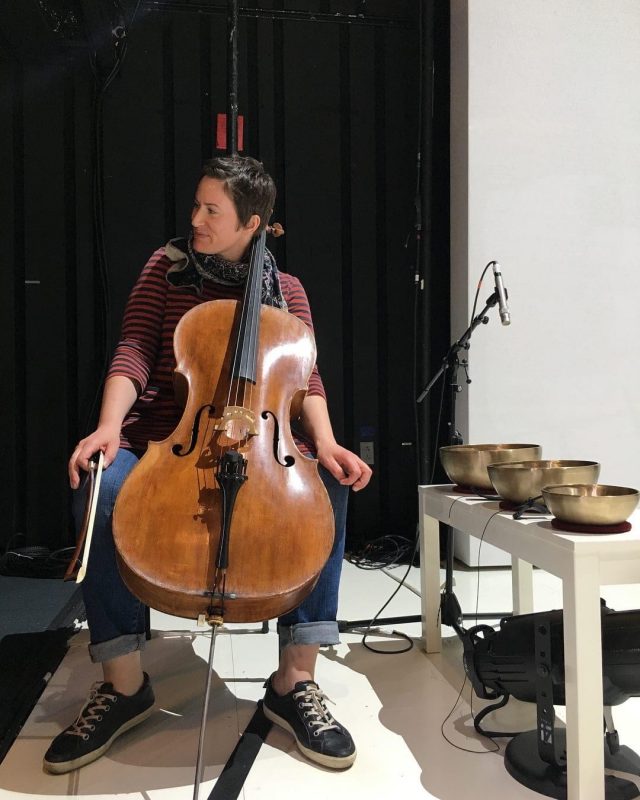 Zsaz Rutowski is a certified sound healing therapist through the Globe Institute for Sound and Consciousness (San Francisco) and has studied under healers and pedagogues David Gibson, Richard Feather Anderson, Silvina Vergara, and Wah, among others. Zsaz’s love of sound healing is inspired by her passion for service and rooted in the sincere desire to help others achieve their full potential. She believes in the power of tapping into the body’s natural intelligence through ancient harmonizing techniques. She has led sound meditations at yoga and meditation centers throughout the New York area and for private clients and colleagues in the music world. Zsaz has volunteered with the New York Foundling (NYC’s oldest nonprofit, serving children in foster care), Helping Parents Heal of Long Island, and Bethany House (which provides emergency shelter and services for women and their children who are caught in the crisis of homelessness). Zsaz is a freelance cellist, composer and sound healer in NYC. She holds teaching positions at the Spence School and the Third Street Settlement, and also maintains a private studio. She’s a proud Local 802 member, Broadway sub and cellist with the Distinguished Concerts International New York orchestra.