Jewish wedding gigs are in danger of becoming completely non-union. This threatens all musicians’ wages in the field. It’s time for a new game plan…

Jewish wedding gigs are increasingly becoming non-union. This will bring down wages for all musicians in the field unless we do something soon.

The Jewish wedding field is in the throes of a serious crisis that threatens to undo everything we’ve won so far. This situation has been building for many years and the problems now threaten the ability of musicians to make a decent living. The very viability of the field is at stake.

We have previously written about the problems faced by these musicians and the negative impact of nonunion employers who are undercutting standards and competing unfairly against union musicians. It is now becoming clear to us, however, that the appearance of rogue nonunion operators is not the cause of the problems in this field, but rather a symptom of deeper issues.

The extent of the crisis is illustrated by an analysis of data obtained from employer job filings. In the last three years there has been a precipitous decline in the number of union jobs being filed, in the number of musician appearances (defined as the total number of gigs multiplied by the musicians employed per gig), and in the gross minimum scale paid out to musicians when compared to the averages for the 2005 to 2008 period. (See Table 1)

*The 2011 data is through July 2011. It has been converted to an estimated annual amount by multiplying by 2.

The number of jobs filed in 2010 was down 47 percent from the average for 2005 to 2008, while the number of musician appearances had dropped by 55 percent and the gross scale wages paid had declined by 53 percent. (See Table 2.) 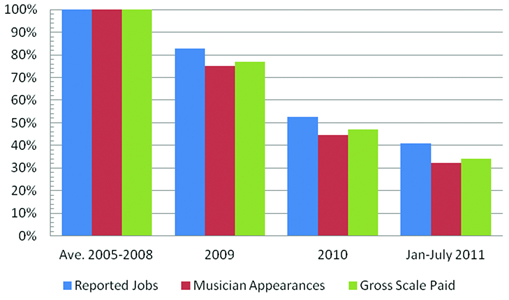 The preliminary data for the first half of 2011 (extrapolated for the entire year) show the downward trends continuing, with declines from the 2005 to 2008 averages of 59 percent for jobs filed, 68 percent for musician appearances and 66 percent for gross scale wages.

This data indicate a decline in union density that is rapidly approaching a tipping point. If this process continues unabated, we can expect a collapse in pay scales, benefits and work standards throughout the field.

Though the rapid decrease in union job filings by employers might be attributable in part to the effect of the recent economic crisis, it is our assessment that this is not the main factor.

The economic turmoil was most acute in 2008 to 2009 but eased significantly in 2010 and 2011. In fact, the New York area economy was never battered to the extent that other parts of the country were, as the local effect of the economic crisis was cushioned by massive infusions of federal aid and subsidies to the banks in particular and the financial industry in general.

Though there may have been a decline in the absolute amount of work being performed in the field as families and businesses have foregone hiring live music because of economic pressures in the broader economy, the main problem is that there has been a pronounced relative decline in union jobs and a corresponding rise in the number of nonunion contractors.

CAUSES OF THE CRISIS

It is commonly assumed that union employers will tend to be priced out of competitive markets by employers who are able to offer lower prices because they pay lower wages. The unionized employers are then forced to slash their own wage costs or move to lower wage markets.

Though this dynamic is valid in some contexts (which will be discussed in more detail below), it is not the primary cause of the problems faced by musicians in the Jewish field

In fact, the standards of pay and benefits that have been long established in this field continue to keep labor costs at or above the minimums set by the union for most musicians.

Union and nonunion musicians alike are all aware of these minimum pay scales and benefits costs. As a rule they will not accept jobs that pay below these levels.

Indeed, we believe that most musicians, particularly the core members of orchestras, are earning more than the union minimums. Thus, nonunion contractors will often brag that they pay more than the combined cost of the minimum scales and the health and pension costs of a union contract. There is no reason to doubt these claims.

If nonunion employers are not in general paying lower wages to their musicians, then how are they able to offer lower prices to their customers? There are two factors that allow them to undercut their union competitors.

First, they have lower overhead costs. As “upstarts” in the field, the will have fewer employed musicians, they will not be maintaining offices or employing staff to carry out day-to-day business operations, and they will not be spending money on advertising or other marketing.

Second, rather than relying on lower labor costs, these nonunion operators are more able and willing to compete on price by slashing their profit margins and offering their services on a lower mark-up (perhaps even at a loss) to gain a foothold in the market.

The application of these competitive techniques is made easier for nonunion contractors in the Jewish field because of several peculiar characteristics of this niche market that have contributed to a widespread and pervasive “informal economy” in which basic rules and regulations of the labor market are evaded and avoided on a broad scale.

There is a widespread and pervasive practice of misclassifying musicians as “independent contractors” rather than employees, allowing employers to pay at or above scale wages, but avoiding the costs of legally required payroll taxes (Social Security, Medicare, unemployment insurance, disability insurance, workers’ comp, etc.).

Many employers, particularly the nonunion contractors, do not even file the 1099 tax forms required for bona fide independent contractors, but simply pay their musicians cash off the books.

The nonunion employers also tend to carry no liability insurance for their operations, further reducing their operating costs.

Many of the nonunion employers gain a further competitive advantage by failing to comply with state and local requirements to register their business operations.

Finally, because of the prevalence of cash payments by customers and off the books cash payments to musicians, the nonunion operators can also avoid payment of sales and income taxes, further enhancing their competitive position against the union operators.

It is precisely this culture of rampant illegal and unethical business practices that allows nonunion employers to thrive and grow.

The role of the union in the Jewish field has been typical of that played in other areas of the music industry. The union sets minimum standards that promote the well-being of all professional musicians, not just our members. We do this by organizing musicians into a strong collective body that:

It is only through such collective action that working musicians as a whole have been able to ensure a decent living for themselves and their families.

By creating and maintaining a universally recognized and acknowledged minimum floor for labor costs, the union has played a critical role in protecting all musicians in the field. This floor remains in place, as evidenced by the continued adherence by employers to the established wage scales (including the payment of the equivalent of the costs of pension and health). The question to be posed, however, is what will happen if current trends continue and the union is no longer a viable force in this particular field?

The absence of a strong union in any field or business is almost always characterized by lower wages, lesser health and pension benefits, less tolerable and fair working conditions, and a general lowering of professional and economic standards. Employers will always have an advantage in negotiating employment terms against their individual employees. When market forces are allowed to operate unchecked, the absence of organized resistance will tend to result in downward pressure on labor costs. This is simple economics.

The union is ultimately the only entity that can protect musicians in the Jewish field and elsewhere, and it provides these protections to both members of the union and to non-members alike.

If the density of union representation in the Jewish field continues to deteriorate, a point of no return will be reached in which the floors established by the union will crumble and musicians will be increasingly forced to accept lower wages.

The competitive forces at play will result in a new dynamic, one in which the focus of employer price competition will be on the reduction of labor costs rather than lower overhead and profit margins. Once this new dynamic takes hold, there will be no counteracting force in place to prevent an accelerating downward wage spiral.

Given our analysis of the peculiar conditions and factors at play, we have come to the conclusion that the only way to save the Jewish Single Engagement field and protect musicians from an impending collapse in pay and working conditions is to force all employers, union and nonunion, to compete on a level field in full compliance with all applicable laws and regulations.

Forcing all employers to operate in compliance with legal standards will make it more difficult for “bottom feeders” to undercut and take work from legitimate employers and reduce their ability to offer lower prices that are predicated on the evasion of tax codes and labor protection statutes. Such an approach will also effectively restore statutory protections that most musicians in the field currently lack, in both the union and nonunion orchestras.

In furtherance of this goal, Local 802 will now vigorously seek to universally enforce the following minimum standards:

In order to effectively implement this strategy the union will operate at three levels. First, it will monitor, investigate and promptly refer any and all evasions of legal requirements by employers (union and nonunion) to the appropriate enforcement agency. Second, the union will notify and issue warnings to all venues in the Jewish field regarding employer non-compliance or evasion of laws or regulations, and will hold the venues responsible if they continue to allow employers engaged in illegal or unethical activity to use their facilities. Finally, the union will work to reinvigorate its communications with musicians and inform them of abusive and/or illegal actions by individual employers.

Local 802 will continue to fight to protect the interests of musicians in the Jewish single engagement field, and will stand up to any employer that threatens or undermines musicians’ interests. With your support we can improve conditions for all musicians. Without your support we can expect an accelerating and continued deterioration of pay and working conditions for everybody.