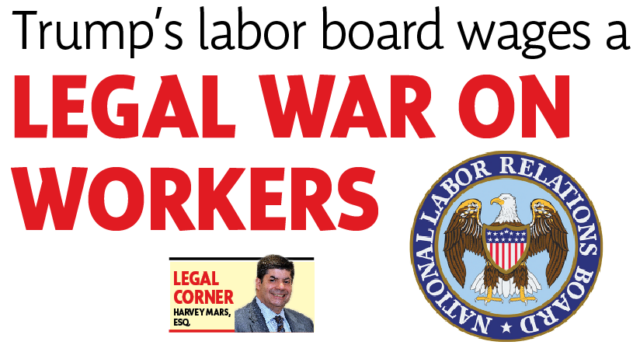 The start of a new year brings with it the promise of new possibilities and beginnings. Unfortunately, this is not the case with labor relations in the United States. The Trump NLRB’s assault on workers’ legal ability to organize and collectively bargain continues unabated. In December, the NLRB profoundly eroded established procedures for conducting union elections and overruled a prior decision that had allowed workers to use their employer’s e-mail system for organizational activity. Combined with the NLRB’s other retrograde rulings over the last two years, the aggregate results of these decisions will severely stymie organized labor’s ability to grow union density. In the upcoming year, one can assume that without a change of either our government’s administration or policy, the crippling assault will continue.

In 2014, after an extensive commentary and review process, the NLRB overhauled its regulations guiding the administrative process for the conduct of union representational elections. This was a painstaking process that examined inherent procedural flaws in the election process that often resulted in unfair elections and skewed results. Regulations were streamlined so that it was less likely that they could be manipulated to affect election results. On Dec. 15, 2019, the NLRB, without substantial commentary, issued a final rule that eviscerated these prior reforms. We can now expect that the delays and ligation that were endemic to the prior regulations will return, thus hampering unions’ ability to organize. These new (or should I say old) rules will take effect April 14, 2020.

Among the changes being effectuated are a lengthening of the time between the filing of the representational petition and the pre-trial hearing during which legal issues involving the proposed unit are discussed, a new requirement that the petitioner submit a response to the respondent’s position statement, the submission of post-hearing briefs and the impounding of ballots in the event of an election challenge. The prior rules permitted the NLRB to consider election challenges after the election was conducted. The new rules eliminate that option. The overall effect of these rules is that a considerable amount of time can elapse between the filing of the election petition and the conduct of the election and issuance of a bargaining order. It is common knowledge that delays can hamper successful election results and permit respondent employers to commit unfair labor practices and intimidate employees into voting against unionization. The NLRB has restored a regulatory scheme that plays right into this strategy.

The following day, the NLRB issued its decision in Caesars Entertainment, 368 NLRB No. 143 (2019), which reversed a progressive decision rendered by the Obama NLRB in 2014 that held that workers could utilize their employer’s e-mail system for organizing purposes so long as this was done on non-working time. That decision, Purple Communications, held that the NLRB recognized that changes in technology altered modern workers’ work environments. E-mail was analogized to being the functional equivalent of a “workplace water-cooler” around which employees congregate. In an effort to modernize application of NLRA Section 7, the NLRB found that concerted activity could legitimately occur in the context of e-mail. (See my Allegro article from February 2015, available at www.bitly.com/mars-february-2015.) In reversing this decision, the current NLRB stated that an employer’s property right to control its e-mail server outweighed employees’ right to organize and that employees had other avenues through which to exercise their Section 7 rights, even though they were not as efficient and effective as e-mail.

This twin assault on organized labor shows us what we’re up against. The current NLRB has made no effort to hide a horribly obvious undeniable truth: it is the enemy of any employee seeking to engage in concerted activity.