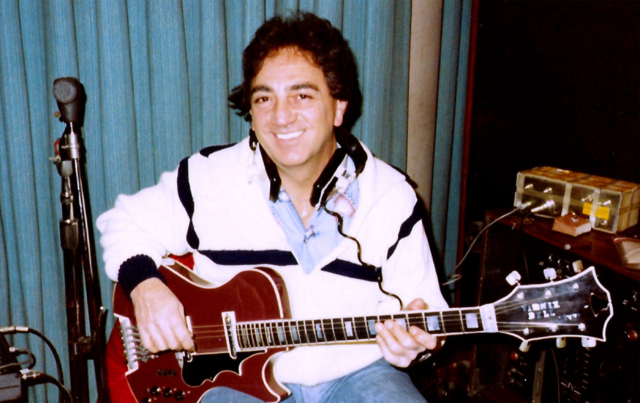 Vinnie Bell (Vincent Gambella), 87, an electric guitarist and a member of Local 802 since 1948, died on Oct. 3. He is survived by his wife Bonnie, daughter Michele, son-in-law Steve, stepchildren Dawn and Albert, grandchildren Krista and Katharina, great-grandchildren Isabelle, Sabrina and Olivia, and many cousins. Below, Dana Countryman shares some memories of Mr. Bell, which were first published at www.vinniebell.com.

If you aren’t familiar with Vinnie Bell’s name, you’ve certainly heard his guitar on hit records from the 60s and 70s. He played on recordings for artists as diverse as the Four Seasons, Frank Sinatra, Dionne Warwick, Herman’s Hermits, Bing Crosby, the Cowsills, Perry Como, the Drifters, Bob Dylan, the Shangri-Las, Rupert Holmes, Jean-Jacques Perrey and Quincy Jones. As a first-call session guitarist, Vinnie played on hundreds of commercials and many film soundtracks, including “The Godfather, “The Devil in Miss Jones” and even “The Muppet Christmas Carol.”

In the early 60s, he started out as a member of two groups: the Ramrods and the Gallahads. Shortly after that, he was briefly a member of the highly successful group The Three Suns. After starting a family, he decided to only do session work, mostly working out of New York City, but also sometimes flying to Los Angeles when producers there specifically requested him. It was not uncommon for Vinnie to play up to five sessions a day at the height of his success.

In 1965, Vinnie played electric guitar on Simon and Garfunkel’s classic track “The Sound of Silence,” a recording that actually helped launch the duo’s remarkable career.

Throughout the years, Vinnie occasionally performed live with Peggy Lee, Sinatra, Barbra Streisand and others.

Besides being known as a guitarist, Vinnie also helped re-invent the instrument. Working with Danelectro Guitars, Vinnie is credited in inventing the first electric 12-string guitar for them, as well as the Coral electric sitar. The electric sitar (usually played by Vinnie himself, but sometimes by others) can be heard on hits by The Lemon Pipers (“Green Tambourine”), B.J. Thomas (“Hooked on a Feeling”), Freda Payne (“Band of Gold”) and The Box Tops (“Cry Like a Baby”).

When he wasn’t in the studio, he was in his home workshop, experimenting with electronics and inventing his own unique guitar pedals. This was at a time when guitar pedals weren’t yet being sold commercially. He pioneered the wah-wah pedal and invented his own fuzztone pedals. By using these unique effects on recording sessions, Vinnie became in high demand to producers who were constantly looking for new sounds.

Vinnie worked with Nat Daniel, the founder of Danelectro, to devise a unique sound effect that sounded like “musical drops of water.” The sound became  Vinnie’s most jealously guarded professional secret. The effect was only played in recording sessions by Vinnie himself  and can be heard on records by the Four Seasons (“Can’t Take My Eyes Off You”) and the Shangri-Las (“I Can Never Go Home Anymore”), to name just two examples. He played this “water” guitar effect in the early 70s on the song “Midnight Cowboy,” which became a Top 40 hit for pianists Ferrante and Teicher. For that hit, he was awarded a Gold Record. (It also won a Grammy for best instrumental composition in 1971, while Vinnie himself was nominated for best instrumental performance.)

Vinnie’s guitar work was admired by both Frank Zappa and Jimi Hendrix. In fact, Hendrix once called Vinnie at home to ask how he achieved his many unusual guitar effects. Hendrix told Vinnie that he loved his electric sitar sound and soon after, Vinnie personally supervised a custom left-handed electric sitar, made especially for Hendrix.

In the 70s, Vinnie was personally requested to play on recording sessions for Frank Zappa and the Mothers of Invention, and in the 80s, for the band Anthrax.

In 2007, Vinnie earned another Gold Record for his guitar work on the theme to David Lynch’s “Twin Peaks.” Composer Angelo Badalamenti said, “Vinnie and I were born and raised a few blocks from each other in an Italian section of Bensonhurst, Brooklyn, and we went to the same junior high. Vinnie played on my very first recording session as well as just about every session I ever had. His unique contribution on ‘Twin Peaks’ is beyond words. I loved Vinnie dearly.”

Vinnie was voted most valuable player on electric guitar seven times by the New York chapter of the National Academy of Recording Arts and Sciences, and was given their emeritus award in the late 1980s.

By the 1990s, he had played guitar or banjo in the Macy’s annual New Year’s Day parade for over 20 years.

On a personal note, I can tell you that Vinnie was one of the sweetest and most humble musicians I ever met. We became fast friends after I interviewed him for a book I was researching about French electronic music pioneer  Jean-Jacques Perrey. During that interview, we quickly hit it off and later would regularly chat about music on the phone for hours.

In 2004, Vinnie invited me to visit him and his wife in New Jersey. During my visit, I volunteered to collaborate with him to create his website (which still exists at www.vinniebell.com).

Vinnie did me the great honor of playing guitar for me in a New Jersey recording studio. We recorded a song I had written especially for him, “Vinnie’s Theme” (which you can find on YouTube). It is probably the final time that Vinnie played both his “water” guitar effect and electric sitar in a session.

Vinnie had great stories about his musical adventures, which he shared with me. Unfortunately, for his own personal reasons, he would never agree to have his life story put into a biography, although I repeatedly begged him to do so. A few of his stories, however, are archived on his website and also in a fine book by Doug Tulloch, “Neptune Bound: The Ultimate Danelectro Guitar Guide.”

I will miss Vinnie’s stories and his sense of humor. He was a very loving guy, and during our conversations, he never failed to ask about my family. He always ended his phone conversations to me with a sincere, “I love you guys!”

Vinnie was truly one of a kind, not only a musician and inventor, but also a dear friend.

Thank you, Vinnie, for your friendship over the last 15 years, and for leaving behind such a treasure trove of great, unforgettable music. I will really miss you. And by the way, Vinnie, I love you, too.

The original version of this tribute can be found at www.vinniebell.com; the version on this page was edited for style and space.