As I sat in heavy traffic on my way home from work this past Friday, unconsciously feathering the clutch in my car as I crawled up the FDR at six miles an hour (I’m one of the last holdouts in NYC who still believes that driving is actually an art that involves a stick and clutch), I asked Siri to play the latest podcast from “The Moth” storytelling series.

In the past few years, listening to “The Moth” has become a soothing distraction. (I don’t mean to knock pop radio because I do need my daily P!nk fix.) But hearing diverse and idiosyncratic people tell their own stories from different neighborhoods, different cultures and even different countries, introduces me to experiences I would never get otherwise, and all the better that I get to do it in time that would otherwise be lost.

The particular podcast I heard on that day featured a Kenyan woman named Bina Maseno who was recounting her experience running for office in Kenya. Among other titles, Ms. Maseno lists herself on LinkedIn as a communication specialist and journalist, but judging by her own story, she’s obviously not someone whose career has just one hat. (She would indeed make a fantastic freelance musician.) She’s also a community organizer, founder of an NGO and a fantastic storyteller. How she closed out her story has echoed in my ears for days. She elucidated a half-formed belief I’ve held for a while, a belief galvanized following the 2016 presidential election. 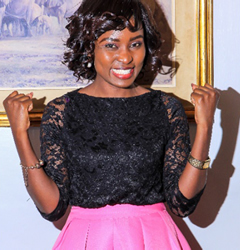 Ms. Maseno’s story forced me to refine my thoughts down to a simple truth. It is not enough to say we want “change.” It’s not enough to sit around a table discussing what “I would do differently if I were in office.” Acting as a Monday morning quarterback, without the bruises and commitment of a person who actually played the game, is arrogance. If we want to see progress in our lives and our communities, if we crave it enough, if we no longer want it enough, but need it enough, we have to do something we haven’t done before. We have to show up. And much like football, women haven’t had a lot of opportunity to be involved in the game.

Four years ago, after losing a friend and colleague – a warm, bright light of a human being – to two men who thought a gun made them powerful, I wrote an article in this publication preaching that to effect change in our culture, we have to make our voices heard. As far as I was concerned then (as a devoted capitalist), that meant giving money to campaigns.

That perspective was narrow. Not ineffective, but narrow. I believed money was enough, but with the most recent presidential election, I’ve come to realize giving money without showing up is still only a part of the effort. (The reverse is also true: we can’t just show up without putting our money where our mouths are. Social movements need support in all ways.)

When I started writing this piece, I thought I would be writing another commentary about gun violence in society and on the proliferation of weapons of mass destruction. (Anything that can propel a projectile at hundreds of miles an hour with the sole purpose of exacting lethal damage on its intended target is in fact a weapon of mass destruction.) But now I realize that this is too narrow a focus. Both sides of the “gun debate” will admit that it is not just about one issue. They’ll say it’s about mental health (true), or stricter gun laws (true), or violence in the media and in our society (true), or myriad other causes that lead individuals to seek their infamy via murder. But the common denominator in these instances is still guns. What can’t be agreed on – largely because a brilliant marketing effort of one lobbying group has managed to equate the words “gun” and “God” in the minds of its constituency – is whether guns are to blame…or people. I think the answer’s actually pretty clear, but maybe I’m not as bright as my Grams said.

So I’ll make this easier. I’m not going to focus narrowly on the gun debate. Partially because I’m just…so…tired of a new shooting every other day. Partially because it scares me to tears every time I think about how much I’m trusting the universe every time I let my two-year-old girl go out the door to school and spend her day without me, or let my one-year-old outside in public in his stroller with the sitter. It terrifies me, because now when I see parents mourning their kids on TV, I’m no longer removed from their agony. I stare at them briefly before looking away, knowing I’m a spectator into an eternally private moment I should not be privy to. I’m terrified that one day that could be me, being watched on someone else’s screen. It makes it hard for me to look at my little girl and my little boy and fully comprehend that I cannot protect them, because there are people in this world who believe their right to carry a weapon that can kill five people in three seconds is more valuable than my children’s right to live and thrive in a safe society. When I think about this issue, my greatest fear is that I will fail them.

What I want to focus on instead here doesn’t take people to as dark a place. Instead, it focuses on potential for more sustained and achievable goals. It focuses on supporting our family members, our mothers, daughters, sisters, aunts and yes, even the occasional white-clad, blond-haired grandmother. What I want to focus on is not just the rise of people showing up, but who is showing up…and how.

We know that major polls show that almost 66 percent of Americans favor gun control. This is a 20 percent increase from two years ago. Even among gun owners, 50 percent follow suit. A whopping 97 percent of Americans favor background checks. Only 20 percent agree that arming classroom teachers is a good idea. So why is gun control still an uphill battle? (Although the NRA is a factor, it’s not the whole obstacle.)

Because the poll numbers are skewed by a gender gap.

Anywhere from 59 percent to 70 percent of women support stricter gun laws, while not quite 50 percent of men can say the same. Women make the difference in almost every major social movement of our generation. So if women make up 50.8 percent of our population, why don’t our laws reflect that? Answer: because there are only 22 women in the Senate (17 Democrats and five Republicans), and 105 women in the House of Representatives (78 Democrats and 27 Republicans). That’s pretty close to only 20 percent for each chamber. Just to drive the point home, that’s nowhere near a fair representation of our society.

But that was yesterday. Today, the number of women running for and currently in office is changing dramatically. Women and their supporters are indeed showing up. In fact, more than twice as many women are showing up to run for office as two years ago: 431 women this year, compared to 212 in 2016. If you follow that math, you’ll appreciate that proponents of gun regulations shouldn’t be as singularly focused on laws regulating guns, but to electing the people who make the laws that regulate guns.

This means electing women. Of course this isn’t an argument to elect a person solely on their gender. I’m sure there are plenty of pro-gun women out there seeking office. Yet numbers show that the dramatic wave of women seeking office in 2018 – the women who are showing up – are overwhelmingly in favor of gun control, and that’s encouraging.

So what of Ms. Maseno?. After losing her election, Ms. Maseno felt disappointed she would not be able to serve her community without that office. But she came to a realization that was as powerful as it was succinct, and what took me far too many words to get across, she says in just a few. She said:

I still believe that giving money and resources to campaigns is a vital component of supporting the policy we want to see enacted, but a critical component to that is who we support, and how we support them. If more women like Ms. Maseno show up, and if more men who support women like Ms. Maseno show up, we can demonstrate that our political leaders’ offices belong to us, not to them. If we show up to demonstrations, to elections, if we show up to fundraisers for candidates and causes and to volunteering opportunities for elections, if we show up instead of sitting it out, then we demonstrate the constitutional power of the citizen.

There’s no better way to do that than to show up.

(If you want any of the sources cited in this article, please e-mail me at zooeys24@aol.com. Also, I recommend checking out and supporting www.MomsDemandAction.org.)

Violist Dave Fallo has been a member of Local 802 since 2002. The opinions expressed by members in Allegro do not necessarily represent the views of the officers, staff or other members of Local 802. We value the diverse views of our membership. To submit a guest commentary or letter to the editor for possible publication, e-mail Allegro Editor Mikael Elsila.