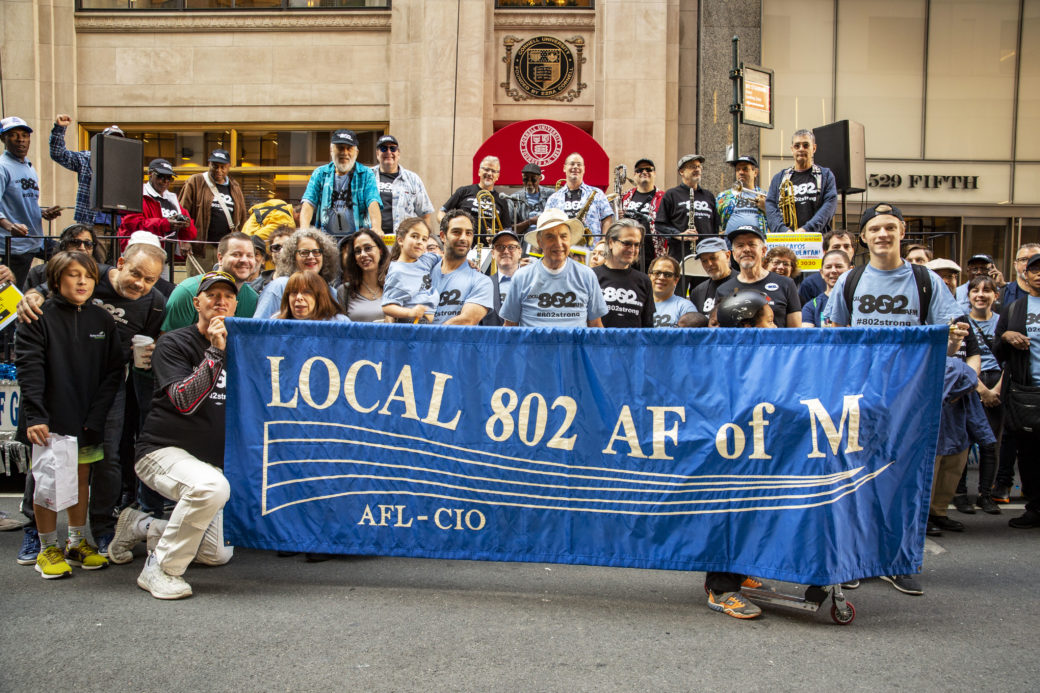 MARCHING TOGETHER: Local 802 staff, members and supporters at the Labor Day Parade (photo by Kate Glicksberg)

As Local 802 looks toward and adapts to the future, we should also look to the wisdom of the past. For instance, Senator Robert Wagner wrote the National Labor Relations Act of 1935 – also known as the Wagner Act. He made the following point explicitly: “Democracy in industry means fair participation by those who work, in the decisions vitally affecting their lives and livelihood.”

For Local 802 to be truly democratic, we must create space for widespread participation and, in turn, we must fully participate in the work of our union. Participation cannot be limited to a small group, but must be a shared responsibility of the whole. Unfortunately, there has been a long-held perception that Local 802 is an entity that is separate from its members. This perception is not what our union’s founders had in mind when 802 was formed, but has become increasingly pervasive in recent history.

Part of this is due to a perceived and real lack of accessibility to musical jobs that are covered under 802 contracts. We must come back to the original idea that this is not just my union but also your union and our union and we must be united in our determination to increase the amount of unionized work for musicians in this city.

As a collective and as individuals, we are the union! We value the union in order to seek and keep fair wages and working conditions, and to support and protect our careers as a whole. The more that musicians look at Local 802 and the AFM as third-party entities where we have no ownership or say, the less democratic – and therefore weaker – we will become. Our wages and working conditions will only worsen with a weaker 802, and I am sure that no working rank-and-file musician wants that.

I believe that our very livelihoods depend upon our musician-to-musician solidarity when it comes to our issues and our negotiations with employers. It is no secret that there is much nonunion work in the Tri-State area that is threatening to become status quo. As union-covered work becomes scarcer and more coveted, we need to ask ourselves as working musicians if we’re okay with this…and if can we reverse the tide.

For instance, as we look ahead to the next decade, are we OK with being paid on 1099s or on a cash-only basis? How much do we value long-term benefits like fair work rules, pension, health, the right to file grievances, the right to challenge harassment, unemployment insurance, the right of first refusal, and the job security of tenured or rostered ensembles?

An overwhelming majority of the musicians of Distinguished Concerts International New York certainly value these benefits. They just showed immense courage in their union campaign (see story on page 6). It was through their massive, self-led and self-governed organizing effort, with the support of the organizing staff at 802, that this was possible. The DCINY musicians recognized that the most effective way to address issues around wages, working conditions, and employer retaliation is to stand together and collectively negotiate a union contract. I hope this collective action shows that we can work to change our workplaces for the better and without fear of employer retaliation – if we have a solid strategy.

We can also point to the success of our recently-bargained Broadway agreement, which is due in large part to an engaged bargaining unit, as well as a hard-working, democratic negotiating committee.

Union contracts have many advantages over non-union work. For example, I played an 802-covered concert at the United Nations in 2015 where the concert began two hours late (and therefore ended two hours late). When the check came, no musician received overtime payment. Thanks to Local 802 member Pawel Knapik’s unwavering reminder to me about this situation, we were able to resolve it. The entire orchestra was paid its back wages. Had this been a nonunion concert, recovering this money would have been much more difficult, if not impossible.

The union is not a building that sits on 48th street. The union is me, it’s you, and it’s us, collectively. And the musicians of New York City should take pride in the high artistic quality of music that we produce, and the manner in which we do it.

For this union to be successful, we must not see ourselves, our institutions, our recording sessions, our club dates, our chamber groups and our shows, as islands. We are part of a larger collective that is here to support each other through both good and difficult times throughout our careers.

Don’t go it alone. We are all Local 802, and we need each other’s participation!

Kyle Hoyt is a French hornist and a member of the Local 802 Executive Board.