It’s a recorder vs. pennywhistle smackdown! When Allegro ran a recent piece on the value of teaching pennywhistles to kids, we didn’t imagine that it would open up a debate on this topic, yet the decision about what instrument kids should learn first is actually a critical and crucial choice. Below, Local 802 members Wayne Hankin and Bill Ochs offer up some subtle arguments…

I applaud Bill Ochs’s recent article in Allegro and wish him success in increasing the pennywhistle’s visibility for our education system. It’s important to encourage our colleagues to bring their goals and ideas to fruition.

Bill’s main point is that “the pennywhistle is a much better choice as a first instrument than the typical plastic school recorder.”

Our message as professionals is about learning an instrument properly that requires a little discipline. Isn’t this what we want to instill right off in kids? Without discipline, no child is going to learn or appreciate any instrument well.

In my 30 years of playing and teaching, I have visited hundreds of schools and as many music workshops. I can see which classes move forward and which lead students towards dead ends. The recorder is simple enough to learn with the right book and teacher, but if one cross-fingering is going to stop a student from learning then we might as well hang it up here because the pennywhistle is not exempt from its own challenges too.

Although Bill’s intentions are good and he makes an effective point about the pennywhistle’s ease in the second octave, he should be careful when adding to the discussion things like, “I’d go as far as to say that the recorder can hold back some children’s musical development.” It’s like saying, education can hold back a child’s development. This poor choice of words might offend some in the recorder community and what we should be doing is working together, not creating divisions. Neither instrument has a major learning advantage over the other.

If both instruments can be had for as little as $5, which instrument offers more? A pennywhistle in D can play in five keys; with a recorder you can play in 24.

Now let’s talk about history. Bill dates the pennywhistle revival to the Celtic and World Music booms of the 1980’s and 90’s. But what really launched the pennywhistle to huge worldwide acclaim happened during the late 1950’s, right here in New York.

Singer and pennywhistler Tommy Makem (also a Local 802 member!) came to Greenwich Village and joined up with the Clancy Brothers in 1956. Five years later they set America on its ears with their 16-minute performance on the Ed Sullivan Show. One of the 80 milliion people who saw that broadcast was John Hammond, who signed them to Columbia Records. Within a year they were known all over the world. To say they were influential is putting it mildly. Any followers or players of the tin whistle will know the names Paddy Moloney, Matt Molloy, Sean Keane and Sean Potts of Chieftains fame, who further popularized the instrument to many more millions of people worldwide during the Irish folk revival of the 1960’s, as well as Mary Bergin, Carmel Gunning, Micho Russell, Sean Ryan, Peter Barnes and jazzer Steve Buckley, just to name a few. Today, the American players who have mastered this wonderful instrument are too numerous to mention here.

In conclusion, I felt all sides of the argument needed to be presented fairly, which is why I questioned whether Bill gave the recorder a fair shake. But to side with him, he’s right that a good pennywhistle program is worth a try. The overall point is that each of the wind instruments discussed brings something special to the table. They all have to be learned properly. Easy introductions only last so long. In the end, it’s about setting the stage to master instruments by way of good teachers and good instruments. That, and not quick fixes, will solidify any instrument’s worthiness for further study and enjoyment and hence greater appreciation for the professionals who play them.

For a longer version of this essay, e-mail the author at WayneHankin@earthlink.net. Wayne Hankin has performed on pennywhistle and recorder in film and television, most recently “Disney’s Princess Enchanted Tales,” “Miss Spider,” “Resident Evil II” and “Breaking Bad” on AMC. 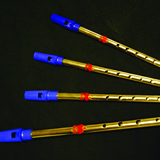 I thank Wayne Hankin for taking the time to respond to my article, for wishing me success in increasing the pennywhistle’s visibility in our educational system, and for expressing his opinion that “a good pennywhistle program is worth a try.”

Wayne questions whether I gave the recorder “a fair shake.” I am admittedly biased towards the pennywhistle as a first instrument for children and, in fact, I’m on a mission to re-introduce it to our schools. Why else would I start www.PennywhistlesForSchools.com?

From my point of view, the recorder has had more than a fair shake. Millions of recorders are in use in our schools and have been for years. But sheer numbers do not necessarily mean that the recorder is a better choice as a first instrument for children.

I have great respect for the recorder as an instrument for professionals and serious amateurs. The recorder’s eight holes – or more properly ten if one counts the double holes – allow a player who knows all fingerings to play chromatically in 24 keys, as Wayne points out.

It’s true that if all beginners are going to do is play “Twinkle, Twinkle” in the first octave, there is not much difference between the recorder and the pennywhistle. But as soon as they move into the second octave, the pennywhistle’s advantages come to the fore.

On the pennywhistle – which has just six holes – a player simply over-blows to play the second octave using the same simple fingerings that were used in the first octave.

On the recorder some fingerings vary from the first octave to the second. And a recorder player must “crack” or partially open the thumbhole to get the second octave notes to speak. The placement of the thumb varies as the notes increase in pitch. How many eight-or nine-year-olds can learn to do this correctly, especially in a classroom setting with twenty or more other students?

And when I say that “the recorder can hold back some children’s musical development,” I am careful to say some children. Talented kids with an aptitude for wind instruments are likely to do well regardless of which instrument they are given. But some of the average and slower kids may fall through the cracks when confronted with the recorder’s complications. Can we afford to lose those kids right from the start? Why not give them a better chance at success in their first musical endeavors?

Regarding the revival of the pennywhistle, I am well aware of the history that Wayne mentions and have written about it extensively in other contexts. But revivals come in waves, and by the 1980’s and 90’s awareness of the pennywhistle had reached a critical mass. Its use in punk, pop, world-beat, New Age music, and in the movies, and in hugely popular step-dancing shows in those decades, helped the instrument break out of its folk niche and reach a much wider audience.

Most importantly, this burgeoning awareness created enough demand so that it became viable to manufacture pennywhistles in the U.S. once again. This happened in the 80’s, with the result that the instrument became widely available in music stores all across the country for the first time in years. None of this was true when the Clancys and Tommy Makem appeared on the Ed Sullivan Show in the 1960’s.

For a longer version of this essay, e-mail the author at BillOchs@pennywhistle.com.