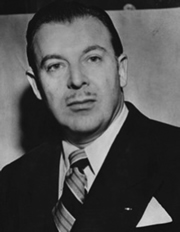 Not many people know the name Burton Turkus. He is best known for taking down nine members of a notorious Brooklyn crime syndicate in the early 1940s, after one of its members confessed everything he knew to Turkus, who was a young assistant district attorney at the time. Turkus later wrote about the episode in a book titled “Murder, Inc. – the Story of the Syndicate,” and for a while he hosted a TV series called “Mr. Arsenic.” The book was made into a movie with Henry Morgan playing Turkus.

Turkus, a supporter of labor, worked for the New York State Board of Mediation and the American Arbitration Association. It is in this capacity that Turkus is best known to the New York City theater community.

In early 1960, while bargaining with the League of New York Theaters, Actors Equity demanded the creation of a pension fund. The League refused based on cost, and a deadlock ensued. After taking a strike vote in the Edison Hotel in late May, Equity decided to strike one show a night beginning on June 1 after the contract expired. The League shut down all the shows when Equity struck “The Tenth Man.” What followed was a 13-day “Broadway Blackout,” as the New York City media called it. Mayor Robert F. Wagner, Jr. asked the city Labor Commissioner Harold A. Felix to come up with a solution. Felix’s idea was a repeal of the 5 percent city amusement tax on all live theater ticket sales with the net proceeds from that tax relief (4.5 percent) to be shared by the benefit funds of all the recognized unions on Broadway. The theaters reopened on June 13, and together, the unions successfully lobbied for the tax repeal in the fall of 1961.

However, a dispute arose between Equity and the League regarding the percentage proportion its fund was to receive. Equity insisted it should get 60 percent of the tax relief proceeds while the League maintained the Felix recommendation and the ensuing agreement had been for the funds of all the unions to get a proportional share. If the production was a musical, Equity’s share would be smaller because of the presence of musicians. Equity demanded arbitration to decide the issue in March of 1962 and the results are as follows:

NOTE: Other unions share in the benefit, including IATSE and others.

The arbitration award was signed by Turkus on April 26, 1963. In August of that year, the League and the unions signed a depository agreement to use the services of B. D. Leidesdorf & Company (an accounting firm) and JP Morgan Chase Bank for the collection and deposit of the 5 percent of gross ticket sales every week that the city no longer collected as a tax. The funds were deposited into the JP Morgan Bank and the bank distributed 4.5 percent – or “the oh four five” as it’s commonly called – to the union funds according to Turkus’s formula once B. D. Liedesdorf provided the bank with the numbers of actors, musicians and stagehands employed that week. A committee comprising a representative of the League and representatives of Equity and IATSE Local 1 was appointed to oversee the process. In 1984 Ernst & Whinney took over the accounting duties from B. D. Liedesdorf. In 1989 Ernst & Whinney merged with Arthur Young and became Ernst & Young, and in 2002 the depository agreement was amended to reflect the new name. Former Local 802 President Bill Moriarity recalled, “My understanding is that once a week, a woman from the accounting firm Ernst & Young would collect the net proceeds of the tax relief from the box offices.” According to Local 802 President Tino Gagliardi, the proceeds are now electronically transmitted for deposit at Chase Manhattan Bank but rather than being held in a savings account, they are now invested in short-term Treasury bills and money markets before distribution to the union funds.

At the time of the arbitration, no one dreamed Broadway ticket prices would rise as high as they are now. In 2017, Broadway’s gross ticket sales reached over $1.6 billion. The net 4.5 percent of that is almost $73.7 million, which is invested in short-term T-Bills and money markets and then divided among the union funds according to the formula. This result means that pension contributions for Broadway musicians have risen as high as 22 percent in proportion to wages.

The Local 802 Broadway Agreement requires employers to pay no less than 5 percent of the gross weekly musician payroll into the pension fund. This acts as a floor contribution just as a contingency. When the AFM Pension Rehabilitation Plan was put into effect in 2010, the employers were required to pay a 9 percent surcharge on that 5 percent, making it a floor of 5.45 percent. But the amount contributed through the Turkus plan is invariably much higher than that, making the 5.45 percent floor moot.

Local 802 is the only Broadway union that to this day has opted to direct all of the Turkus proceeds to its pension fund. All the other unions split their share between pension, health benefits and variable benefits like 401ks. “Phantom of the Opera” violinist and chair of the Theater Committee Jan Mullen, herself a 20-year veteran of Broadway negotiations, says the League has pressured Local 802 over the years to direct some of the contributions to health benefits rather than bargaining additional contributions to the health fund. But to date, Broadway musicians have stood firm on maintaining the current structure.

Because of the Turkus award, pension contribution amounts are never bargained in Broadway contracts. The amount contributed is determined by the formula. According to President Gagliardi, the amounts per musician are so high, Broadway is the single bargaining unit with the most contributions to the fund, representing about 15 percent of the total contributions.

There are a number of Local 802 contracts with relatively high pension contributions. New York City Ballet is at 15.26 percent with the 2010 rehab plan, American Ballet Theater is at 17.44 percent with rehab and freelance orchestras like American Symphony Orchestra and New York Pops are all at 16.35 percent with rehab, but thanks to Burton Turkus, Broadway is the heavyweight.

Martha Hyde is a multi-woodwind player who performs on Broadway. A member of Local 802 since 1980, she is also a trustee on the Local 802 Health Benefits Fund.