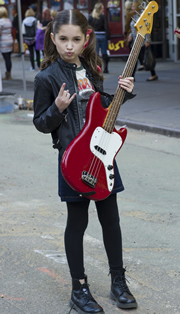 I joined Local 802 when I was cast in the role of Katie (the bassist) in “School of Rock” on Broadway. The kids in the band joined Local 802 because we were both actors and musicians. I love playing gigs where I can sing as well as play my bass, guitar or uke. I’d love to play more with bands made up of my friends. I’ve played with my friends from “School of Rock” at the Triad Theater, Bar Nine, the Museum of Natural History and on Wonderama TV and we had a blast. I love playing with my middle school jazz ensemble now and am excited to also be a part of the NYC Middle School Honors Jazz band. My favorite recent gig was playing bass on stage at the 30th anniversary performance of “Phantom of the Opera.” It was amazing to be a part of such an incredible Broadway milestone. Another great recent gig was when I got to sing and play bass at the American Theater Wing’s Centennial Gala. I had the honor of performing the finale number of “Aquarius” and “Let the Sunshine In” from “Hair.” It was really cool because I started off singing and the audience didn’t know that I was going to get my bass and lead everyone off for the last part of the number. But my favorite gig of all time was when I got to play bass with Stevie Nicks! One last story about my bass: when I auditioned for “School of Rock,” I played my ukulele and had something prepared on my guitar as well, but I had never played bass before. When I got a callback for a few days later, they asked me to come prepared to play the big finale number, “Teacher’s Pet,” on bass. My dad got me a bass that night and I learned it over the weekend. That was definitely a musical challenge!