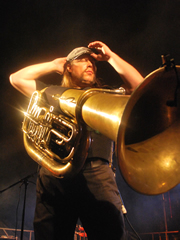 I’ve been a full-time musician for 20 years so I figured it was about time to join the union. The logistics and business “behind the notes” gets increasingly complex and intense, so we gotta stick together. My musical goal in New York City is to make as much music as possible and continue to thrive while doing so. It’s as simple as that. My most recent favorite gig was a show at the Festa del Redentore in Venice, Italy, with the audience dancing around the band as we pelted them with original instrumental music. It was pure magic. Moments like that are what keeps me moving forward. I love the audiences in Europe. I have quite a bit of orchestral and other classical training, but I’ve also spent a lot of my time with rock, jazz, blues, funk, new music and so much in between. I’m very proud of my ability to remain solid in many contrasting musical environments. Some of my current mainstay ensembles include a “psycho-mambo” band called Gato Loco and a couple of bands on the crazier side of traditional jazz called The Gotham Easy and The Bee’s Knees. I also am part of a German rock band called the Ja Ja Jas. I’ve been working with a lot of brass bands, both New Orleans and Mexican style, including Banda Nueva York. I am also about to drop a soul-jazz solo EP. I am hired to record quite a bit, I maintain a roster of private students, and I also consult with school music programs. I jump into many different types of things. It’s not uncommon for me to run right from a formal concert hall to a club for a late-night set. I love doing that.