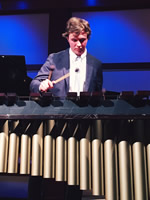 I joined Local 802 after attending NYU’s Broadway Percussion Seminar. I would love to be able to say yes to any gig thrown at me. But I think my main goal is to become involved in the Broadway scene as quickly as possible, and then work on recording sessions and playing with bands from there. Through studying all genres of music (including classical at great length), I feel as though playing out as much as possible is the next step in developing myself as a musician. Last November I played at Carnegie Hall as a member of the New York Youth Symphony, and that was pretty much as transcendental an experience as one imagines it to be. The ensemble is fantastic, and the concert was a noteworthy step in my journey as a musician and also a member of the orchestra. I began playing drums when I was 8, and ever since then I have grown to love all aspects of music making. I took up piano and guitar in high school, and since then have become obsessed with music theory, ear training and music history, all of which I believe to be crucial to becoming the best musician you can possibly be. My principal instrument is drums and percussion.