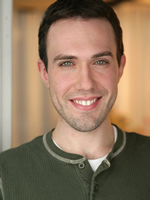 After many years as a music director and pianist, my dream is to play in Broadway and Off Broadway pits, as I’m sure it is for so many. Until then, I want to earn my NYC cred by playing benefits, music directing cabarets, and working on new shows. One of my favorite recent gigs was serving as music director and keyboard 1 for “Mamma Mia” at the Tuacahn Amphitheatre in Utah. (I’m obsessed with all things ABBA. I could do that show forever!) I’ve also enjoyed playing events sponsored by Broadway Cares/Equity Fights AIDS. It’s such a great reason to come together and have fun for a cause. I graduated from the American Musical and Dramatic Academy in 2005 and pursued an acting career for almost ten years. However, even during that time, I would usually pick up one or two music directing or pianist gigs a year. It was in 2011, when I was the associate music director on North Shore Music Theatre’s “Legally Blonde,” that I really started thinking that the music side of theatre was where I should be. In 2014, I officially made the switch and I’ve never been happier. Being able to blend the training I received as an actor with my ability to interpret a score brings me a lot more joy and fulfillment than being in the spotlight. Music says so much more than words can express. I also love that music can be a major storyteller in a show, and can interpret a scene in so many interesting ways that may not be apparent on paper. I really do feel that music is the universal language.