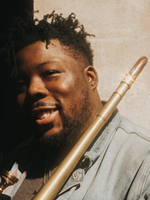 I joined Local 802 after getting a job performing in a Shakespeare in the Park production of “Twelfth Night.” My musical goal in New York City is to be a well-respected, first-call trombonist. I want anyone who hires me to know for a fact that they want Jeffery Miller on trombone. I want my sound and musicianship to speak for itself. My most favorite recent gig was playing the Caramoor Jazz Festival. I was asked to put together and lead a band, so I chose some close friends, most of whom I grew up with in New Orleans. We had so much fun just playing the music we grew up on, and the audience really dug it. I also have a couple of trombone solos on the new Christmas record by John Legend. I’ve been singing for as long as I can remember. I was given a drum set around age seven, but it was at age 10 I was given a trombone by music teacher Keith Hart. I was one of the last people in my year to pick up the instrument, but it’s taken me so far that I haven’t looked back. In New Orleans, I played with the Preservation Hall Jazz Band, Delfeayo Marsalis and the Uptown Jazz Orchestra and many more. Since moving to New York, I’ve played a lot with Wynton Marsalis and the Jazz at Lincoln Center Orchestra, the Wynton Marsalis Septet, Jon Batiste and Stay Human, and others. I am mostly a freelance musician and teacher, but I’m currently a student at Juilliard. I lead my own jazz quintet and I am a solo singer/trombonist as well.