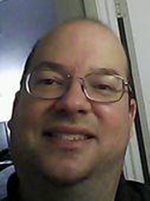 I re-joined Local 802 when I got hired to drum for a show at the Merry-Go-Round Playhouse in Auburn, New York. I’ve primarily played for musical theatre in my career, in addition to jazz and wedding gigs. I’ve been lucky enough to play for five national tours of musicals as well as a European tour. My goal is to play more union shows, including Broadway and Off Broadway. One of my favorite recent gigs was playing in a production of “Hair” in Woodstock, Vermont. Both the cast and band were excellent and the show is one of my favorites. I grew up playing a lot of rock, but in high school I received some good training in classical percussion, which helped my musical theatre work. My brother actually became a director of musicals and helped me get some of my first gigs. I went to William Paterson to study jazz and right after graduation started playing in pits professionally. Music has always been very therapeutic for me. It never fails to provide much joy and an overall feeling of balance and serenity.