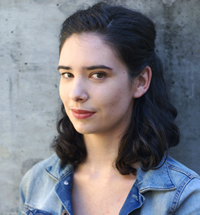 I joined Local 802 when the music team of “The Cher Show” hired me to play rehearsal piano; I also serve as music assistant for the show. (The show opened in Chicago and is now on Broadway!) My musical goal is to keep working in musical theatre (as a composer, lyricist, music director, arranger, pianist, copyist, etc.) and keep performing as a singer/songwriter. One of my most favorite gigs took place about a year ago when I performed a solo show of my original songs at Feinstein’s/54 Below with some of my closest friends and collaborators. It felt great to play my own music in a venue where I’ve seen so many other performances, and it made me feel really validated in the huge New York music/theatre scene. Music has always been a big part of my life; I’ve been playing piano since I was five. I played in lots of bands, orchestras and choirs growing up and I started playing piano and flute for pit orchestras in high school. I music directed 11 musicals at Tufts University, which is also where I started writing for musical theatre as well as my own songs.  Music and storytelling are my favorite ways to connect with other people. I love the teamwork of making music in a group and I also love playing music by myself for therapeutic purposes. I worked as a music assistant for Public Works (at the Public Theatre) and I’m a composer in the BMI Musical Theatre Workshop and with Maestra,  a female composers’ group hosted at New York SongSpace.