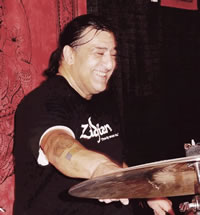 It has always been a lifelong dream to join the musicians’ union. I’m the drummer in the band Lunar Tourists as well as in many other groups and projects. As part of my musical past, I played in Camp Lejeune’s Second Marine Division Band and have performed for the past five U.S. presidents and Britain’s royal family. Some of my favorite recent gigs include sitting in at B.B. King’s with Cosmic Ray Blues at a Grammy after-party with Mickie Free, and playing with my band at Union Square Park and the Bitter End. Music is important to me since it has provided me with the driving force by which I live my life. I have never given up on this commitment, since the greatest benefit of music is seeing happy faces in the audiences when I play. My musical goal in NYC is to continue my effort to encourage all musicians to challenge both  their audiences and themselves by playing music outside of the popular norm.