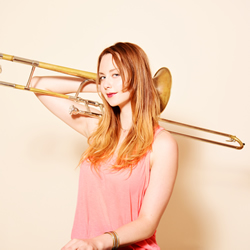 I joined Local 802 when I was hired for the Broadway musical “The Cher Show.” After several years of doing nonunion freelance work in NYC, I was thrilled at the opportunity to enter the Broadway world and join the larger Local 802 community. The many resources the union offers are so incredible, and so is how the union advocates for fair employment. I am lucky to have a very diverse career that spans jazz, Brazilian music, rock, funk and pop.  I deeply enjoy writing and performing my own music with my group and would love to make that a larger part of what I do in NYC. Last summer, my band got to perform at Electric Forest Music Festival in Michigan. We were by far the most jazzy act on the festival’s lineup and it was amazing to see such a different audience react to music the likes of which they’d probably never heard before. Receiving a positive response for my own music on a bigger stage like that was really rewarding, and the festival appearance made it possible for my group to tour the midwest for two weeks. I grew up in San Francisco, the daughter of two professional jazz musicians. My dad is a trombonist and my mom was a vocalist, both of them specializing in Latin jazz. I started with piano and liked to sing from an early age, but I started studying trombone at age 9. Studying music for many years was more of a social/community activity and I learned a lot from sitting in with my parents’ bands and gaining insight from them and their friends on the many aspects of being a working musician. Peter Apfelbaum was a close family friend and my musical “godfather,” and he really helped me with some of my first gigs when I moved to NYC to study at the Manhattan School of Music. During my freshman year I was asked to join Phish guitarist Trey Anastasio’s touring band, which opened me up to a lot of other styles outside the jazz world, and I’ve been involved in a very eclectic range of projects ever since. During my time at MSM, I became very interested in composing and writing lyrics, which brought about more singing work in my own group and with others. To me, music is a language that connects people from all walks of life with something that can be heard, understood and felt by all cultures, ages and social classes. Music can be completely transformative with its ability to make people stay in touch with their emotions. While it can also be competitive at times, I feel music is about being able to work together and interact with people. Apart from my work with “The Cher Show,” I tour with the Trey Anastasio Band, am a member of Peter Apfelbaum’s SPARKLER and the NY Hieroglyphics, and appear from time to time with Big Gigantic, Escort, The Motet, Jesus on The Mainline and Phil Lesh. I have my own solo project, a duo project with NYC guitarist Mike Bono, and am currently working on a new project with Brazilian guitarist/composer Ian Faquini. I teach privately as well, mostly via the online lesson platform Lessonface.