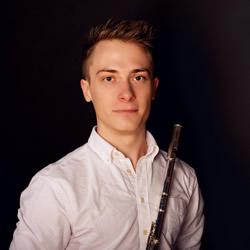 I joined Local 802 when I was asked to sub with the New York Philharmonic  and I figured it was about time to join the network of union musicians. I’m a flutist, and my current goals in NYC are to expand my freelancing network as well as gain as much professional orchestral experience I can. One of my favorite recent performances was performing Strauss’ “Alpine Symphony” with the Philharmonic, conducted by Semyon Bychkov. The emotional and musical vulnerability that Bychkov displayed elevated the orchestra’s performances to something truly remarkable. It was a fantastic experience to be surrounded by so many people playing to the hilt and sharing with each other what is some of the most beautiful music. My father was a middle school band director, and I was always exposed to music in one form or another as I was growing up. I was always taken to his concerts and to his colleagues’ concerts at other schools. I eventually found myself playing flute in fifth grade. I was in band and choir during middle school and joined the El Paso Youth Orchestra. In high school, I was a very active member of my school’s marching band and was going to be drum major my senior year, but instead attended Interlochen. I went to Rice University for my bachelor’s, where I studied with Leone Buyse. After that, I attended Juilliard for my master’s, where I was a student of Robert Langevin. Music can be such a joyous and emotional experience and is capable of communicating certain unknowable things. That to me is the whole purpose of music: to communicate in ways beyond words and images the feelings of love, pain, happiness and sorrow. I think music’s importance lies in its ability to engender empathy and connection between people in the deepest ways. I am part of a woodwind quintet named Tangent Winds, which formed during my time at Juilliard, and we all have serious ambitions to continue performing and growing our repertoire while in the city. We were recently in residency at the Church of the Blessed Sacrament.