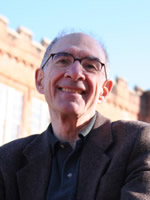 I re-joined Local 802 after a 24-year absence from New York. During that time, I taught at Ball State University in Indiana and the University of Alabama, where I founded and directed a new musical theatre performance program. I’ve won awards as composer (Outer Critics Circle Award for best Off Broadway score for “Kuni-Leml”), conductor (Kennedy Center/American College Festival Award for outstanding musical direction for “Threepenny Opera” and “Jesus Christ Superstar”) and arranger (Downtown Theatre Award for outstanding adaptation of “Vagabond Stars”). As a pianist, one of my trademarks is improvisation in “a multitude of musical styles,” to quote a review in the New York Times. I’m delighted to be returning to the world’s greatest music city, and the world’s greatest association of musicians, Local 802. I plan to continue my activities in all the above areas. And I’ll continue to serve as vocal coach and accompanist for musical theatre and cabaret performers. One of the great satisfactions of teaching and coaching has been seeing students shine on Broadway (“Hamilton,” “Kinky Boots, “Rock of Ages,” “Carousel”), Off Broadway, and throughout the country. My last gig in Alabama was conducting “A Chorus Line” at the beautiful and historic Saenger Theatre in Mobile, a fitting finale to our wanderings. I attended the High School of Music and Art, and earned a B.A. in music from Harvard and an M.M. in musical composition from Ball State. I’m an alumnus of the BMI/Lehman Engel Musical Theatre Workshop. I studied composition with Leon Kirchner, Hugo Weisgall, Ernesto Pelligrini, and Mark Lawner; and arranging with Johnny Carisi. Music is my language and medium of communication, and it’s my great good fortune that it is also my profession.