Local 802 and other unions have been attacked by conservatives for wanting a temporary waiver from the new health law. But there’s a good reason we asked for one.

If you’re on one of the union’s health plans, you could have received a letter by now from the Local 802 Health Fund announcing the fact that the fund obtained a waiver from the Department of Health and Human Services.

The waiver excuses Local 802’s Health Fund from having to comply with one of the regulations of the nation’s new health law, the Affordable Care Act.

There is a lot of confusion over this, and the new law’s opponents have leaped at the chance to use the 111 waivers HHS granted to criticize the new law.

In a recent essay that made its way around the Internet (see box below article), syndicated columnist and Fox News contributor Michelle Malkin asks why a union would support the legislation and then seek a waiver from it.

She names Local 802 in her list of unions requesting waivers from the bill, and thus our union is being propagated throughout the conservative blogosphere.

She further wants to know why low-cost plans are being phased out when President Obama said anyone who was happy with his or her insurance could keep it.

Ms. Malkin clearly is not a fan of the ACA, and she jumps to several conclusions. In doing so, she misidentifies Financial Vice President Jay Blumenthal as the “financial vice president” of the plan. In fact, he is one of ten trustees on the plan, which is a separate entity from Local 802 with its own finances.

She also confuses “grandfather status” – which has to do with a plan’s existence before the law was signed – with the seeking of the waiver.

However, she raises a fair question: why seek a waiver from a law you support?

Answer: because the law has not yet gone fully into effect.

These are the goals of the new health care law:

The ACA seeks to do this by establishing – or having states establish – “exchanges” where you can shop for comprehensive coverage and get a subsidy from the government if you cannot afford the premium.

It squeezes insurance companies by limiting their profit margins, hoping they in turn will squeeze savings from providers.

About 30 years of research shows that health care costs are very high because providers are paid fee-for-service. Thus the incentive is to deliver more services, which results in expensive, redundant and often poor care.

As we wait for these exchanges to start up in 2014, regulations are going into effect to guarantee comprehensive coverage.

While Local 802’s Plan A+ is considered comprehensive, Plans A and B are very limited.

If that were to happen right now, Plan A and B participants could find themselves without anywhere else to go for coverage.

To prevent this, the plan trustees applied for a yearlong waiver on annual caps on coverage.

This prevented the caps on Plan A and B from rising 1,500 percent and 15,000 percent respectively, which would have rendered both plans unsustainable.

As the legislation unfolds over the next three years we can expect to see limited policies disappear, and smaller insurance companies either go out of business or merge with larger ones.

Because the medical provider industry is increasingly dominated by large players like Continuum Health Partners, only insurance companies with enough market clout will be able to force down the cost of health care.

Neither the health plan nor Local 802 have, in the words of Fox News contributor Tracy Byrnes, “a lot of money and corporate attorneys.”

But the plan trustees will be watching regulations carefully. They may team up with other multi-employer plans like those of sister entertainment unions and the building trades to protect the health benefits of our members as the ACA phases in ahead of the year 2014.

We realize this is all very complicated. As a Local 802 Health Fund trustee and fellow musician, I’m happy to talk to you if you have questions. E-mail me at EarMar4@verizon.net.

Martha Hyde is a multi-woodwind player who performs on Broadway. A member of Local 802, she is also a trustee on the Local 802 Health Benefits Fund. 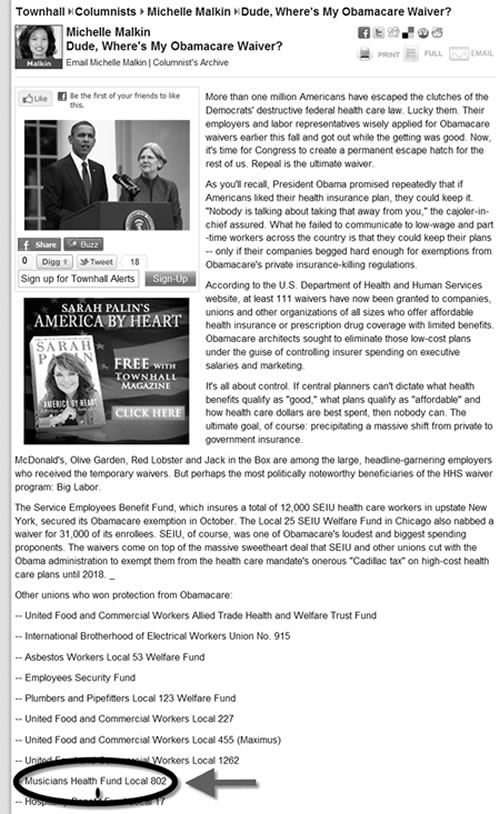