He’s at the top of his class. Red Press has been performing and contracting for so long that younger musicians can only dream of having such a successful career. A member of Local 802 since 1942, Red grew up in the swing era, where he earned chairs in the bands of Benny Goodman and Tommy Dorsey, before becoming a contractor on Broadway. During his long career, Red recorded with Tony Bennett, Rosemary Clooney, Pearl Bailey, Lena Horne, Leonard Bernstein, Itzhak Perlman, Placido Domingo and many others. He also performed with the American Symphony Orchestra, Brooklyn Philharmonic and New York City Ballet.

In 1957 he played his first Broadway musical, and since then has been involved with more than 100 shows. During that time he worked with Irving Berlin, Richard Rodgers, Jule Styne, Stephen Sondheim, Michael Bennett, Bob Fosse, Josh Logan and Jerome Robbins. In 2007, Red was awarded a Tony for Excellence in Theater. Red has recorded film scores and TV themes, and his own compositions have sold over 100,000 albums.

Recently, Local 802 recording rep Bob Pawlo sat down with Red and recorded his story. What follows are Red’s own words on the supremacy of swing, the appeal of Broadway, and advice for musicians who are just starting out. (Oh, and when you see Red on Feb. 26, wish him a happy 90th birthday!)

When I was 14 years old, it was the era of Benny Goodman and Tommy Dorsey. The swing orchestras had just become world famous. I fell in love with swing. My friends and I – even the ones who weren’t musicians – could sing all the songs from the recordings and even sing the jazz phrases that the musicians played. It was an era when swing music dominated the whole environment. Swing was king, and I was enraptured by it.

My father loved music. He played the piano and also kept a drum set next to the radio to play along with the swing bands. He asked me if I would like to play the saxophone; of course, I said yes. I studied with the best teacher in the Bronx, Bill Shiner. He taught me to play the clarinet as well. Bill put together an all-saxophone band. On my right sat Lenny Hambro, and on my left was Stan Getz. Both went on to successful careers in the music business.

By the time I was 16, I formed a band of three saxophones, one trumpet, piano, bass and drums. We bought stock arrangements of all the popular tunes of the day, which were readily available. We played in the local dance halls and during half-time at basketball games at the Y. Jobs then paid $3 a night, which was fine for us amateurs.

When I was 17, we worked the Catskills during the summer. From the first time I played the saxophone, I knew that I wanted to make music my life. I was an honor student in high school, and had already started college, but my heart wasn’t in school any more.

During World War II, I knew I would be drafted into the Army. Luckily, I saw a notice at my teacher’s studio about how to enlist in an Army band. Of course, that sounded wonderful to me. Not only could being in the band save my life, I would be doing what I loved – and getting better at it. The band I joined was sent down to Newport News, Virginia. I spent three years there. We had our own swing band, where I got to play lead alto.

I went into the Army an amateur and came out a professional. All I wanted to do next was play with a swing band. Three months after I was discharged, I was hired to play lead alto in a band led by Bobby Sherwood. Although the lesser bands weren’t known for paying well, we made $100 a week. By contrast, my father was earning $35 a week as a salesman. From there, my career as a lead alto player took off. For the next ten years, I played with better and better bands until I finally played with Tommy Dorsey and Benny Goodman. Jimmy Dorsey at left (in black suit) and Red Press, third from the right. “Nothing matches the thrill that I had when I was playing with Tommy Dorsey’s band.”

However, by the time I joined the Dorsey band, the swing era was pretty much over. Tommy was still popular and still drew crowds, but the mass appeal of swing was gone. Also, playing with bands meant traveling most of the year. I wanted to settle down.

When I finally left the road, I played at various hotels and also at movie theatres where bands were hired to play four shows a day between showings. I also started to play jingles and record dates. But one particular gig had a tremendous advantage: playing in a hit Broadway show. To know that you’re going to be working a full year – or maybe even more than a year – seemed like heaven.

My first show was in 1957, the same year I got married. It was a show called “The Body Beautiful” by Jerry Bock and Sheldon Harnick. There were 25 musicians in the pit, which seems like a lot today, but was typical then. It closed after about 10 weeks. I went back to my freelance work and got a job at the Roxy, which was similar to Radio City Music Hall. We had 35 musicians on staff playing four shows a day. My next Broadway show was the original “Gypsy,” which ran for two-and-a-half years.

As far as contracting, I started as a “house contractor” at the Palace in 1970, thanks to Mel Rodnon. (A house contractor deals with payroll and logistics, but doesn’t really hire and fire musicians. That responsibility falls to the “producer’s contractor.”)

Shirley MacLaine was coming to play at the Palace. The producers asked me if I was capable of hiring an orchestra. Of course, I knew the good players in town. That started my long tenure as a Broadway orchestra contractor.

Now let’s talk about the union. I can’t picture Broadway without a union. Someone has to protect you as an individual, to see that commitments are made and kept, to see that everyone is earning proper scale. There’s no security without a union. When I started on Broadway in 1957, there was no pension or welfare, and the union wasn’t always as democratic as it should have been. At that time, the union negotiated privately with the theatre owners. The officers would come back, call a meeting, and say, “All right, this is it, guys, this is the best we can do,” Any gains in the contract were usually very meager. Nonetheless, the contract was always ratified. I and a few others felt we should have a theatre committee and to be able to sit at the table and negotiate. We printed up papers and passed them out among the musicians in the different theatres, and set up a meeting. The union resisted us, threatening us with expulsion for “dual-unionism.” We persisted, and from that effort was born the theatre committee that exists today.

Now it is 2013. Everything in life changes. As far as the Broadway contract, everyone knows that the minimums have decreased over the years. But I think the quality of the players in the pit has risen, partly because it’s one of the best jobs in town.

What would I say to a young person now looking to break into the scene? What advice would I give? It’s very difficult. I look back and I know my mother didn’t want me to be a musician because the odds of being successful were so small. That is true today as well. But of course with what we’re going through with the country today, I guess you can say the same thing about almost any occupation. If there’s nothing else in the world that will make you happy and this is your dream, then stay in it – don’t leave. And if you’re staying in it, then the next thing I can say is to play wherever you can and meet as many different musicians as you can. Also, you can’t always change who you are, but having a friendly personality never hurts. Be a cooperative person.

Charlie Chaplin wrote in his autobiography that he was always friendly with musicians. He said they were the nicest people, because to work in an orchestra you’ve got to be cooperative. You’ve got to listen to the other players and blend. That gives musicians a certain kind of personality that he felt carried over into their relationships. That’s the kind of personality you should have, so that people like you and want to recommend you. But you’ve got to study, too.

My dream of being a musician was fulfilled. The advice I’m giving to others is the same advice that I took. I wanted nothing else other than music, and I’m very happy that I went for it. I hope everyone else gets their dream too.

UPDATE: Red Press died on Oct. 24, 2022 at the age of 98 after being a member of Local 802 since 1942 (see tributes in the New York Times and Playbill). Please enjoy these photos below submitted by his daughter Gwynn Press Anidjar: 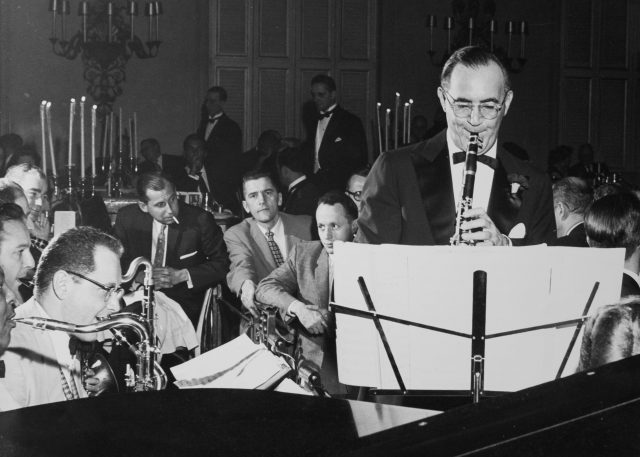 Red Press (on saxophone, with head forward) and Benny Goodman. 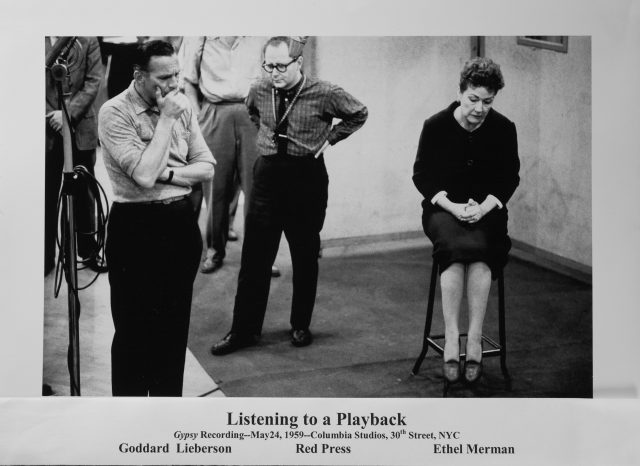 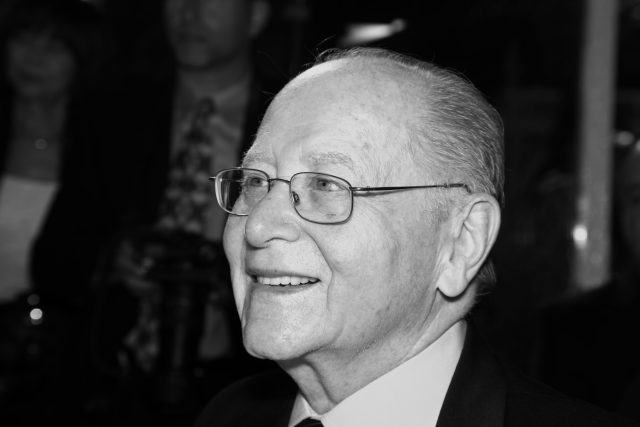 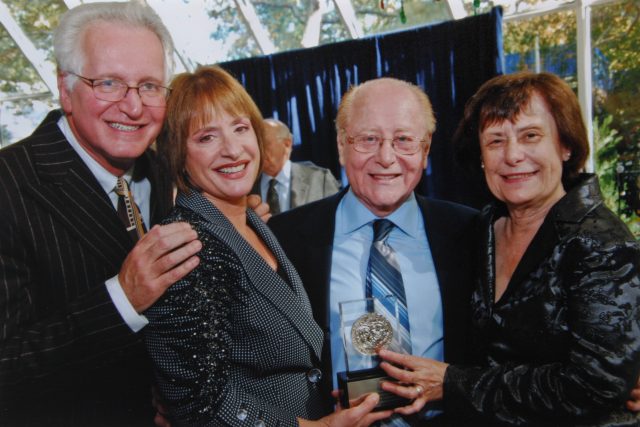