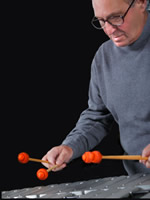 Joseph A. Venuto, Jr., 89, died on Feb. 14. He was a percussionist and had been a member of Local 802 for almost 40 years. He is survived by his wife Beverly, daughter Linda and son Greg, who is a drummer and a longtime staff member of Local 802. Below, Greg offers the following tribute to his father.

My Dad, Joe Venuto, was my best friend and a brilliant musician who was a top studio percussionist in the 60s and 70s. He was born in the Bronx to Italian immigrant parents, and I remember him telling me how he got his first drum set from my grandfather. He went on to study with Henry Adler (who was also my own teacher) and then Phil Kraus, where he found his real bliss – mallet percussion. After a master’s degree from Manhattan School of Music, he auditioned for the Sauter-Finegan Orchestra where he became well known to musicians and even placed in Downbeat Magazine’s reader’s poll for vibraphone. He’s featured on the Sauter-Finegan pieces “Solo for Joe” and “Swingcussion.”

My dad went on to play in the Johnny Richards Orchestra and then with Radio City Music Hall. By 1959, he was very busy in the recording field and live TV. Three sessions a day and live TV at night was the norm for him. I started going to sessions with him at five years old, and I remember picking up checks for him at ten years old (when Local 802 was on 52nd street) from a gentleman by the name of Floyd in the Recording Department.

Later, when he was in his 40s, he left New York to reside in Reno, Nevada. He played for everyone (so did I). He met a beautiful soul named Bev Colgan – a harpist and incredible person. She would become his wife, and they even had a vibes and harp duo, recording and playing live.

My father earned an AFM pension, for which he was very grateful. He loved 802 and all it meant to musicians. He really believed in unity when it came to musicians and the union.

His recordings are numerous. Some standouts are “Focus” (with Stan Getz), his work with Sauter-Finegan, endless record dates, jingles…ad infinitum. I will tell you a nice recording to listen to is “Everybody Plays the Fool” by the Main Ingredient. You can hear him clearly in that tune!

My father thought out of the box. He loved to read books, look at trees and animals, and was the funniest and most humble human being I have ever known. I loved him and he loved me. It’s kind of fitting that he passed away on Valentine’s Day.

With a heavy but loving and grateful heart,

p.s. I  would love to hear from my dad’s friends and colleagues. Send me a message below.