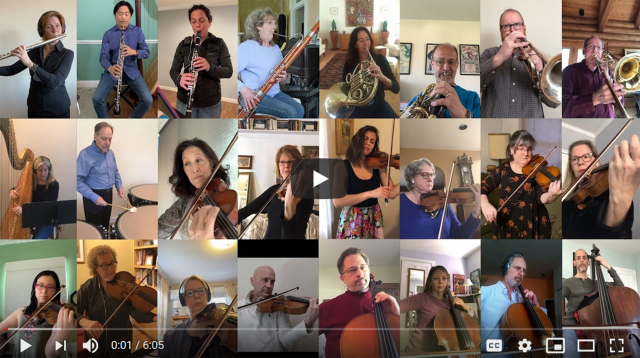 “No man is an island,” wrote the poet John Donne. Really? I’m not so sure about that. After the Stamford Symphony was forced to cancel the rest of its public performing season, we found ourselves struggling to find ways to connect with our audience and to continue to bring them a semblance of our live concerts. Our CEO, Russell Jones, has spearheaded an effort to create a larger web presence that both educates and entertains our subscribers and patrons via the equivalent of home movies and links to other online material while we remain on hiatus.

It seems that many other groups around the world have taken to “phoning it in” and that’s exactly what we did! After not being allowed to have contact with others for over a month, we reverted to the use of the cold and mechanical click track aligned with an initial guide track consisting solely of the lead violin part to an arrangement of “Amazing Grace.” Having no idea what the rest of the arrangement sounded like (besides that violin and my bass part) was an eerie feeling as I counted through the first empty 16 measures of the first verse. The next 16 measures also included no bass part and I watched myself on my phone as I continued to count my rests. There were an additional two measures added here and I could only imagine what instruments would be joining to complete the transition to my entrance.

We had been asked to self-isolate in order to protect ourselves and our friends and neighbors and it seemed that was exactly what we were doing musically as well. But I’ve always felt more protected when playing with others in real time, in the same room. I really missed not just playing my part but hearing the whole gestalt of the work in all its complexity and subtlety.

Truly miraculously, our operations manager Tony Melone was able to stitch together all of the individual videos created on cell phones by my fellow musicians and realize the final draft. After phoning and Zooming each other for the past month, it was wonderful to see each other on the same screen working towards the same goal. And, it was especially inspiring to see that three of our next season’s soloists had contributed to the project as well!

It was also important for us to recognize the medical teams and other first responders in Fairfield County who selflessly and tirelessly attempt to heal and protect us. To them, we wholeheartedly and respectfully dedicate this little piece of ourselves.

Bassist Peter Weitzner has been a member of Local 802 since 1975.