Musicians in the Greater Bridgeport Symphony have lost a case that puts other Connecticut workers in the cross-hairs. We need to fix the situation.

This month’s story is about musicians in Bridgeport, Connecticut…but first some legal background is needed. As you may or may not know, federal laws provide some legal protections to employees – but only up to a minimum acceptable standard. They represent a legal floor, rather than a legal ceiling. Thus, under our federal and state system, states are free to enact legal protections for workers that exceed federal standards or cover those who do not fall under the scope of the federal law, so long as the federal government does not preempt states from doing so. For example, state minimum wage laws can provide for a higher minimum wage than federal law does. Likewise, state law can forbid discriminatory conduct that far exceeds conduct prohibited under federal legislation. In fact, since it appears that federal standards are being eroded by our federal government’s current administration, we can take some solace in the fact that state law can provide a barrier against such erosion. However, as I have recently learned in a proceeding I initiated against the Greater Bridgeport Symphony, this is not always the case.

(Just a quick reminder: since about 2011, Local 802 has represented musicians in Bridgeport, as well as other Connecticut towns that had been in the jurisdiction of former AFM Local 52-626, including Greenwich, Stamford and others.) 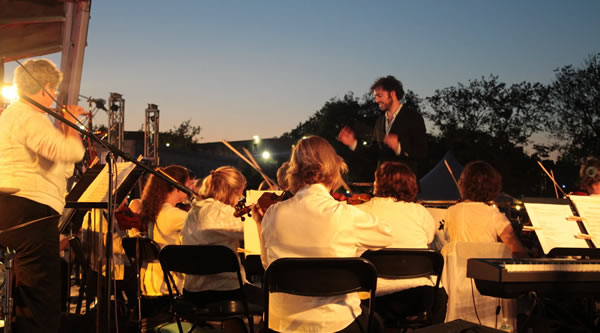 Greater Bridgeport Symphony musicians performing outside in 2017.
Photo via www.bptsym.org/news

This case at hand involved an improper labor practice claim that several orchestra members filed against the Greater Bridgeport Symphony asserting that their terminations were a result of their service on the orchestra committee. This case presented an unusual scenario because this orchestra does not have a formal collective bargaining agreement with its musicians and is not covered under the National Labor Relations Act, the federal law that guides U.S. labor relations. Under the NLRA’s jurisdictional standards, symphony orchestras are only covered by this statute if they have gross revenue of at least $1 million (see NLRA Reg. Section 103.2). Since the Greater Bridgeport Symphony has considerably less gross revenue than $1 million, the NLRB could not take jurisdiction over the claim and the claimants were relegated to the Connecticut Department of Labor.

Unfortunately, Connecticut law utilizes an arcane outmoded definition of employee that doomed the case from the getgo. Most state and federal laws guiding labor relations utilize the “right of control test” to determine whether a worker is considered to be an employee covered by the law. This is an agency test, meaning that if workers can be deemed “agents” under the direction and control of an employer, they are deemed employees. As a result of this test, freelance musicians performing for the Lancaster Symphony were determined to be employees entitled to organize and bargain collectively under the NLRA (see Lancaster Symphony Orchestra vs. N.L.R.B, 822 F. 3d 563, D.C. Cir. 2016). The NLRB found the Lancaster musicians to be employees despite the fact that they worked infrequently, were paid low wages and had no expectation of continued employment. The same facts applicable to those musicians also applied to the musicians performing with the Greater Bridgeport Symphony. The only difference was the legal standard that was used.

Under Connecticut’s labor statute, rather than following the right of control test, the Connecticut Labor Board follows the “economic realities test” to determine whether individuals are employees. Under this test, individuals are deemed employees covered by the act if their “employment is a dependent, subservient relationship characterized by inequality of bargaining power in controversies over wages, hours, and working conditions.” (See Simsbury Light Opera Company, Decision No. 4369, 2009.)

The primary thrust of this standard is that in order to be deemed employees, workers in Connecticut must depend entirely upon their employer for their daily wages. Thus if musicians work elsewhere and obtain substantial income from other sources, they will not be considered to be in a “subservient/dependent relationship” and thus not an employee of a freelance orchestra that they work for sporadically. As a result, though musicians working for the Greater Bridgeport Symphony would have been found to be employees under federal and New York standards, under Connecticut state law they were not and were not entitled to protection from unfair labor practices. The complaint was dismissed. (For those who want to look up the decision, the reference is Connecticut Labor Board case No. U-33190.)

The result of this decision is that a whole host of workers who are not covered by the National Labor Relations Act will not be able to seek the shelter of Connecticut’s labor law. Musicians for orchestras such as the Greater Bridgeport Symphony will be unable to organize and collectively bargain for their mutual aid and protection. This legal lapse must be corrected. Whatever legislative influence we can muster should be directed squarely at the Connecticut legislature to correct this unjust situation. Muscians should not be denied legal protections simply because they choose to perform music in Connecticut.