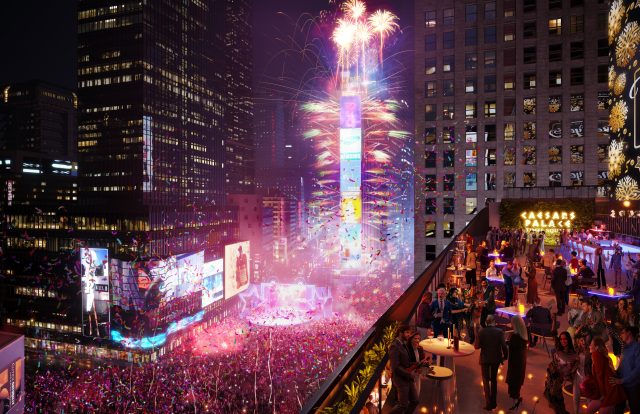 GAME ON: a rendering of the proposed Caesars casino and hotel complex in Times Square

In a bid slated to bring new opportunities for our members, the developers of a proposed casino and hotel in Times Square have signed labor peace agreements with Local 802 and other unions. By joining a coalition of stakeholders in labor to support this project, Local 802 intends to make sure that developers follow through on their promises to address fundamental concerns like workers’ rights, traffic, congestion and safety.

As Local 802 President Tino Gagliardi wrote about casinos in Allegro in 2013, “It remains my opinion that we can do a lot more for musicians by being on the inside of this process — with a seat at the table — rather than on the outside, throwing rocks at it.”

Those words are still true today. Local 802 supports this proposal because it gives us an opportunity to build a relationship with the casino developers before the project is off the ground, including the chance to enforce promises of labor peace, union neutrality, safety, and traffic remediation, among other issues. If we ignore this opportunity, we lose the ability to best represent our members’ concerns.

We’re aware that some members are ethically opposed to casinos. In 2013, Local 802’s former Recording Vice President John O’Connor wrote a powerful op ed opposed to casino development. One of John’s points was that casinos often prey on the working class. But the casino project in Times Square has significant potential to be different from previous casino attempts in New York. For one, the developers are asking for community input from residents, unions and other stakeholders — and are addressing their concerns in advance. Secondly, the Times Square location means that high-rolling tourists from around the world may be the primary audience. This presents a unique opportunity to stimulate development in Local 802’s home territory and possibly create new union agreements for our musicians as well as entertainers of all kinds.

The state AFL-CIO, the AFM and Local 802 have all supported the concept of strong union jobs in casinos. Even our members have shown a positive interest. In 2005, when Allegro asked readers, “Are casinos good for musicians?” a majority of those polled — 64 percent — were generally supportive of casinos while 36 percent were generally against. Many answers were nuanced.

Why are casinos coming to NYC? In 2022, the New York State legislature passed budget provisions for three new casino licenses in downstate New York, which includes NYC, Long Island and Westchester. It’s generally believed that ResortsWorld (in Queens) and Empire City (in Yonkers) will win two of the three licenses. The third license is still up for grabs, and there are several contenders, including sites in Times Square, Hudson Yards and Coney Island.

The coalition that Local 802 has joined is supporting the proposal for a Times Square casino drafted by the developer SL Green on behalf of Caesars, which also owns casinos in Las Vegas, Atlantic City and dozens of other cities. The proposed casino would be a skyscraper at 1515 Broadway, near the New Year’s Eve ball drop.

We believe that this casino project has the potential to be positive for musicians and all workers. SL Green and Caesars have already followed state law and agreed to sign a labor peace agreement with Local 802 (as well as Actors’ Equity) that guarantees “neutrality” during any organizing campaign — and this promise of labor peace applies to any of the casino’s subcontractors or related employers as well. This means the casino and any of its entities are not allowed to engage in anti-union campaigns, giving musicians an advantage in achieving high-standard union contracts. The labor peace agreement also guarantees “card check” union recognition.

This expansive labor peace provision is especially important because the music at this casino complex may be contracted by Roc Nation, a division of Live Nation.

“I want to be clear to our members,” said Local 802 President Tino Gagliardi. “Local 802 supports casino development in NYC as long as our musicians get guarantees for labor rights, traffic congestion and other critical issues. So far, SL Green and Caesars are taking the right approach, which is why we are joining this coalition.”

In a press release, the developers claim that their casino proposal will generate more than 7 million new visits to Times Square annually and more than $65 million in new annual Broadway ticket sales. They say a successful bid will generate “$967 million in annual area spending, providing a much-needed boost to area theatres, hotels, restaurants, and businesses, and commit to fund a wide range of neighborhood initiatives and improvements to make Times Square the safest, cleanest, and most pedestrian-friendly entertainment district in the world.” They further claim that the proposed casino and hotel complex would generate 636,000 new overnight hotel visits and $166 million in local retail spending and include a congestion mitigation and security improvement plan for the Times Square area.

Some members may question Local 802’s support of a casino project that has the potential to bring even more congestion to Times Square. In response, we’ve received promises from the developers that they will work in partnership with former NYPD Commissioner Bill Bratton and Times Square organizations to add security, sanitation and traffic investments that will improve the overall quality of life for those in and around Times Square. The developers pledge to:

As part of the proposal, casino developers spoke to residents and got their buy-in. Jimmy Wirt is a Hell’s Kitchen resident who joined the coalition to support the project. He said, “Revitalizing Times Square starts with investing in better on-the-ground security.” Wirt added, “As a long-time resident of New York, I’m concerned about the uptick in visible crime in the Times Square area, particularly around transit stations. That’s why I’m supportive of a new gaming and entertainment facility, which would bring millions in much-needed, state-of-the-art security infrastructure.”

“New York City already has the best live music in the world, thanks to the professional union musicians who perform at Lincoln Center, Carnegie Hall, Broadway, and hundreds of other clubs and venues,” said Local 802 President Tino Gagliardi. “More live music for NYC is always a good thing, especially when musicians earn the wages and benefits they deserve. We support this plan for a new casino and hotel complex in Times Square where professional musicians would provide great music while enjoying the protections and high standards of a union contract.”

David Levy, communications director for Actors’ Equity, said, “Equity members depend on a strong, thriving theatre industry in Manhattan. Bringing almost half a million new theatregoers into our theatres, a commitment to union jobs, and unprecedented investments in safety and traffic flow will be beneficial for Broadway and its workers.”

Other unions agree. “A new gaming facility in Times Square would provide hundreds of well-paid, union jobs during both construction and operation,” said Mike Prohaska, business manager of the Mason Tenders’ District Council of Greater New York and Construction and General Building Laborers’ Local 79. Prohaska added, “Caesars and SL Green both have strong pro-labor histories, and they have committed to minority hiring and apprenticeship programs that will open a pathway to the middle class for even more New Yorkers.”

Chaz Rynkiewicz, Vice President of Laborers’ Local 79, added, “Our members need housing we can afford in New York City, and this is the only plan that puts a casino in a part of the city where it belongs and won’t take away land that should go to housing.”

Click here if you have comments or questions about Local 802’s support of the casino proposal. 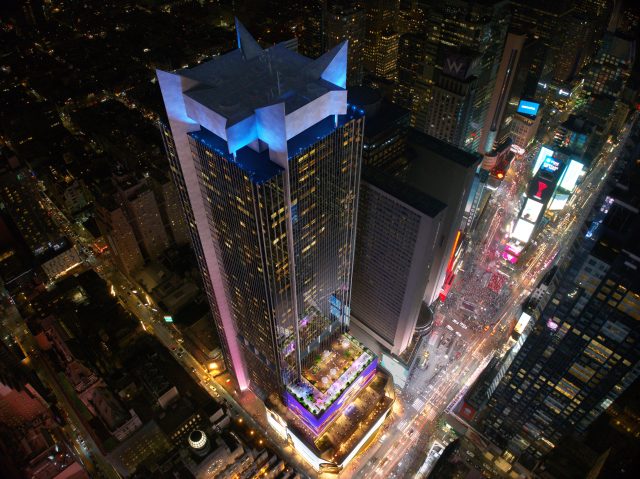