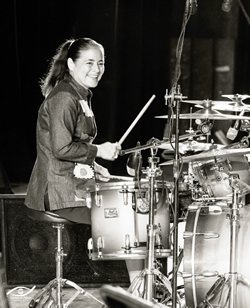 Diversity in musical theatre is growing in small but important ways. I have been very privileged to be part of two amazing shows back-to-back that featured diverse casts with plenty of women. Playing drums for “Summer: The Donna Summer Musical” was an absolute joy and not bad at all for my first Broadway show. I made lifelong friends, and I feel very privileged that I got to join the amazing Broadway community. There were 15 women in the cast and five men! There was also lots of diversity in the band and backstage, and even the band was mostly women. It was super cool to be in that environment.

My second show, which had a short run, was the Off Broadway musical “Chick Flick.” It was a fun, uplifting show about four women and their friendships. The coolest thing was that it is was written by a woman – the amazing Suzy Conn – and featured four women in the cast. The music was pop and funk and a lot of fun to play. Our musical leaders, Matt Castle and Frank Galgano, told me that they wanted to put together a fun work environment that would make us want to be there every day. That is exactly what happened: it was a great band, and a great hang! My fellow musicians in the “Chick Flick” band were Broadway veterans who were a joy to play with: Irio O’Farrill on bass, Andy Zinsmeister on guitar and Christine MacDonell on reeds. Another very cool thing was how the walls of the set opened up at the end of the show for the big reveal of the band. The drums were front and center, and the audience was able to see how live musicians provided the powerful heartbeat of the show. I was very proud to be a part of this wonderful production.

All of this musical theatre work opened up to me – including my Broadway debut – as I turned 50. I got the jobs through pure persistence. I knocked on doors for years and was super-prepared when opportunity knocked back. My advice is simple: always play your best on every gig because you never know when someone who could change your life is listening to you. The contractor John Miller actually heard me perform at a reading of a show many years ago and he remembered me when my name kept coming up for the Donna Summer show.

I’ve always been a musical chamelon. I’ve played for big-name artists like Andy Williams, the Lennon Sisters, Petula Clark, Debby Boone, Glen Campbell, Ann-Margret and others. I’ve been on the road forever, and now my work in NYC is picking up. I play all kinds of different musical styles, which is required now for the Broadway scene. And I always make sure to learn styles as authentically as I can.

As for my own background, I am the embodiment of someone of the Americas. (We are a nice mixture of everywhere!) I am from Mexico, the daughter of a Mexican father and a Peruvian mother. On my father’s side, my grandfather was from Mexico and my grandmother was from Panama and grew up in Chicago. And on my mother’s side, both my grandparents were from Peru, but my grandmother had Croatian and Italian ancestry. So I have a nice mixture of cultures all around. I was born in Germany and spent my childhood in Vienna. Then I went to Mexico for high school, then came to the U.S. to study music in my early 20s. I’ve been here ever since!

My musical theatre breakout  wouldn’t have been possible without the union. Local 802 has been nothing but helpful every step on my journey. Any time I have a question, the union is there to answer.