Elayne Jones, 92, the first Black percussionist to hold a principal position in a major symphony orchestra, is alive and well and living in California. She was a member of Local 802 for almost 70 years and her story remains inspiring to a new generation of musicians. Last year, Jones published her autobiography “Little Lady With a Big Drum.” The book moved Allegro contributor Barbara Steinberg to write this tribute to Elayne Jones.

Elayne Jones remembers that her mother had an ambition of becoming a concert pianist. That turned to lead, when she found could only work as a maid. “The only thing people of African origin were fit to do was wait,” Elayne said. “We came as slaves. White people considered us strange creatures, second to the animals, and they feared us. No white person could ever imagine that we’d be sitting next to them in an orchestra.”

I learned this from reading Elayne’s recent autobiography, a powerful memoir that I recommend to all. As I read Elayne’s book, it reminded me how much white America needed a racial divide to make sense of itself. Segregation made racial superiority comfortable, because after serving them, Black people would disappear into their own worlds, invisible by design. “If you’re white, you’re right. If you’re brown, stick around. If you’re black, get back,” the popular saying went.

In 1960, U.S. marshalls had to escort six-year-old Ruby Bridges, as she bravely integrated a white elementary school in the South. But few might not know that 18 years earlier, Elayne Jones had integrated the High School of Music & Art in NYC. As students lined up to pick an instrument, Elayne stared at how many there were to choose from. The violin felt like a good fit, but her teacher didn’t even measure her. The strings teacher declared that she was “too skinny” to play the violin and walked out of the room. But he came back with the brass and percussion teacher, who handed her a pair of drumsticks and said, “I recommend you study the drums. We all know Negroes have rhythm.”

Racist stabs like that tend to have consequences that last a lifetime, especially if the victim is young and intimidated at the time. Surprisingly, this manipulative experience led Elayne to fall in love with playing percussion in an orchestra. She didn’t join a jazz band. Classical music transformed her into a rubber band, as it stretched her away from Harlem.

In 1945, she won the prestigious Duke Ellington Scholarship, which enabled her to go to Juilliard, where she studied with the principal percussionist of the New York Philharmonic, Saul Goodman. 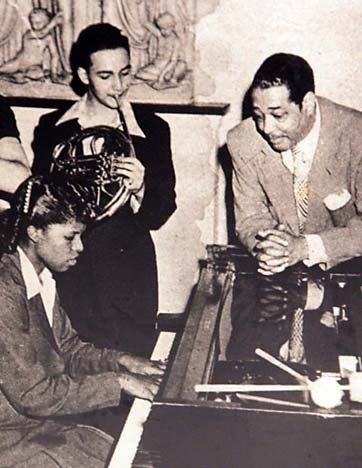 Percussion players were big guys. Seeing this “little Black girl” upstage them was more than they could tolerate. Goodman loved her playing, and didn’t care what anyone thought about it.

He chose her to play timpani for the Juilliard Orchestra’s final concert — Fritz Reiner conducting Brahms First Symphony. The feared leader of the Pittsburgh Symphony invited Elayne to his dressing room afterwards. His scowl softened as she approached. “You make beautiful music with these hands,” he said.

Throughout her memoir, Elayne is consistently amazed when prestigious musicians and orchestras recognize her talent. However, no matter what she achieved, her “elation” and “joy” partnered with the “racism that invaded her self-image and belief in her intelligence.”

This pattern of astonishment, elation, and then humiliation would follow Elayne all her life. The first two emotions rose from her ability to defy society’s claustrophobic attitudes. The humiliation was more conspiratorial. Orchestra managers and board members panicked at the thought of offending “the sensitivities” of their white subscriber base, if a Black musician was seen on stage.

When the New York City opera tour arrived in St. Louis, Missouri, she had to sleep at the local YWCA, after she was denied a reservation at the company’s hotel. In addition, the management in St. Louis did not want her to play in the orchestra, either.

Compounding this insult, Camilla Williams, the first Black woman to sing a leading role with the company, was prevented from performing any role other than Madama Butterfly, because a geisha’s makeup uses white foundation to achieve an unnaturally white skin. This experience proved Elayne’s often-argued point: “authenticity” and “realism” were used as covers for racism.

The opera season lasted only half a year, which left her unemployed from December to May. If there was a short-term gig during the off season, it was offered by Local 802.

At the time, the union worked out of the Roseland Ballroom at 52nd Street and Broadway. Musicians showed up to get gigs in the main room, and called it “the floor.” Elayne noticed that Black musicians were only hired to play their own cultural gigs. “Equality only went one way,” she said.

On September 26, 1957, “West Side Story” opened at the Winter Garden Theatre on Broadway. Contractor George Kukrie hired Elayne to play as a sub in the Broadway production, as well as play with the touring orchestra in 1959. She could not have played “first run” in the orchestra pit, because it would have violated the Jim Crow laws. (She also played timpani on a 1972 Deutsche Grammophon recording of the show with Seiji Ozawa conducting the San Francisco Symphony.)

In the Local 802 union hall, among the clique of symphony musicians, Elayne met Harry Smyles. He had graduated from the Cleveland Institute of Music, where he studied with the principal oboist of the Cleveland Orchestra. As she encouraged him to join Local 802, they noticed bassist Alfred Brown. “We’re surprised to see you on this side,” Harry laughed. The laughter needed no explanation. Brown had graduated from Curtis, but felt no hope of obtaining a position for which he would be qualified.

The three met occasionally to discuss the absence of Black musicians in symphony orchestras. While Elayne and Harry focused on the underhanded machinations of orchestral auditions, Alfred felt the biggest problem was nepotism.

Elayne wrote, “Since musicians of African origin were reluctant to move out of the community, we thought we would establish a venue in which they would feel comfortable. This is the spirit in which the Symphony of the New World was created.”

They wanted a Black conductor, but could not find one willing to work in the United States, “so we had to find a progressive white conductor, who could meet our demands.”

Alfred Brown had played a gig with my father, Benjamin Steinberg. He had been impressed with my father’s outlook about the racial situation and his sincerity. When he approached him, my father was flattered and pleased with the idea.

It is remarkable to me that Elayne only met my father in 1964 — at the historic meeting to establish the goals of the Symphony of the New World. Her memoir made me feel as if I were looking at a cubist painting of parallel lives.

At the meeting, the first goal was to create job opportunities for the many talented non-white musicians, who had so far not been accepted into this nation’s symphony orchestras.

My father took the role of music director and started fundraising. It took him just one year. Donors, friends and foundations combined to enable the Symphony of the New World to debut at Carnegie Hall on May 6, 1965. (I wrote about the history of the symphony here.)

During this time, two Black musicians auditioned for the New York Philharmonic. They did not make it out of the first round.

Alfred Brown jokingly said, “Suppose it was impossible to know if musicians were Black or white when auditioning? Would Black people make it?” His question triggered the idea of musicians auditioning behind a screen to remove discrimination from the audition procedure. It took two to three years, and the practice continues to this day. (However, history tells us that the quest for justice is never ending. Screened auditions, while revolutionary at the time, are now being questioned by some activists as not actually accomplishing the intended goal of diversity, equity and inclusion.)

Soon the timpanist position in the San Francisco Symphony became available. Elayne played “Le Scare du Printemps”  and won the audition. She would be the first Black musician to earn a principal position with a major orchestra. 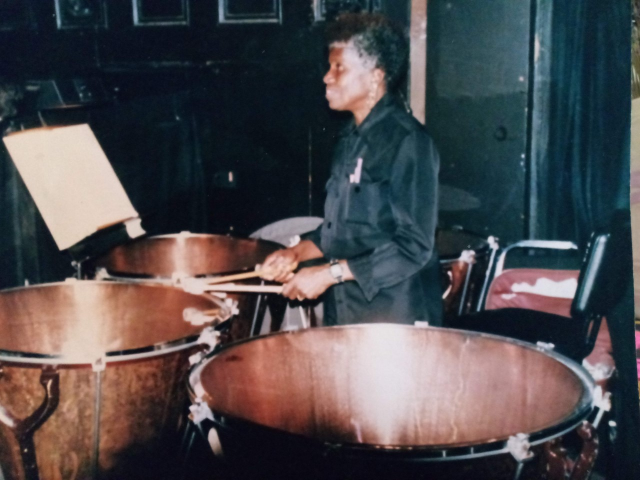 When my father heard this news, the volume of cheers that erupted in my house was as loud as a stadium of football fans when the home team made the winning touchdown. Elayne gifted my father with a black and gold canister that held a fifth of Scotch. It was also a music box, which played the first theme of Beethoven’s Fifth Symphony. I still have it.

However, despite her prestigious new position, a nervous San Francisco Symphony orchestra manager tried to “hide” her on stage. But she never missed a concert, toured with the San Francisco Symphony in Europe and the Soviet Union, and received excellent reviews from critics. Then it came time to apply for tenure, an easy walk, she thought. On May 15, 1975, she got the call. The orchestral committee denied her application. She sued for discrimination and lost. After 30 years of fighting exclusion, she underestimated the depth of racism in San Francisco. To this day, I don’t think she has stopped crying about it.

Elayne continued her role as principal timpanist for the San Francisco Opera Orchestra until she retired in 1998. At the time, you had to apply for your pension from the orchestra itself. When walking into her pension meeting, three white male members of the orchestra insisted on accompanying her. In her book, she writes, “The way the orchestral pension system worked, the concertmaster is the most highly paid. Then comes the oboist, trumpeter, horn players, and timpanist. I spoke for 40 minutes. I said, ’All the other instruments have seconds or are in a section. I performed for years under the stress of people knowing I was unusual, watching to see if I made a mistake, and I was alone.’” She ended up securing a second-place amount, instead of the normal fifth-place timpanist pension. After she finished, her colleagues laughed, ‘You didn’t need us at all.’ ”

As verdant leaves line the path to her apartment in Walnut Creek, California, a 92-year-old woman greets her neighbors. They think she is sweet. They have no idea who they’re talking to.

Barbara Steinberg is the daughter of the late conductor Benjamin Steinberg, founding artistic director of the Symphony of the New World.