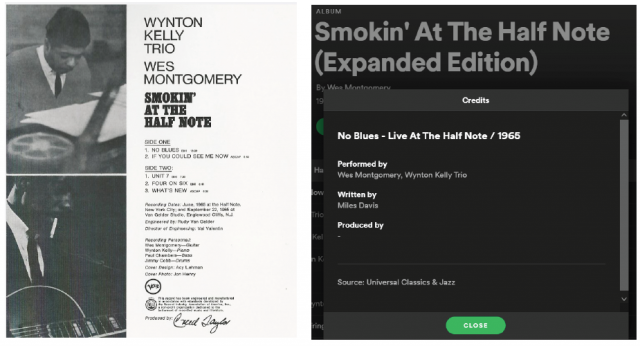 WHAT’S LOST IN THE DIGITAL WORLD: Check out the differences between the original liner notes of the 1965 Wes Montgomery album “Smokin’ at the Half Note” (left) where all of the musicians are listed (Wes Montgomery, Wynton Kelly, Paul Chambers and Jimmy Cobb), and the digital liner notes for a track from the same album on Spotify (right), which hardly contain any credits.

As we celebrate Jazz Appreciation Month, I ask my fellow jazz musicians to reflect upon how appreciation of our music has actually diminished in the decades since the digital paradigm shift dramatically altered the landscape of how we create and how folks access our recorded music.

In his manifesto “You Are Not a Gadget,” Jaron Lanier describes a phenomenon he calls “lock-in,” in which design flaws and biases of an inventor can become encoded in an invention. Then, once new technology reaches critical mass of standardization and market share, its involvement in people’s everyday lives produces such an acceptance of those flaws and biases that we’re not only stuck with them, they can redefine our perceived reality.

For example, when Karlheinz Brandenburg invented the humble MP3 file format, he limited the metadata fields in a manner that prohibits including information most jazz fans care a great deal about — namely the identity of the players creating the music. Generally, all you get with the most popular digital audio file formats are the song title, the featured artist and possibly the songwriter and composer. Omitting the players’ names in player-driven music like jazz removes some of the fun of being a fan of our music. This info is comparable to the details sport fans find so engaging. Imagine being a fan of the New York Yankees and not knowing who the players on the team are. That is virtually unthinkable. Yet an entire generation of music consumers has been raised in a world devoid of comparable information regarding the players in bands whose music they dig. They can of course find this info somewhere on the web, but doesn’t that negate the convenience that made online digital formats so irresistible in the first place? Few streaming services ever list the player info, and many online broadcasters with curated programs never tell you who the players are. This has undermined our ability to bring in new or younger fans by the means that older fans became connoisseurs of our music.

When I first encountered the album “Smokin’ at the Half Note” (see screen shot above) in a record shop, I paused before buying it. I already knew Wes Montgomery, but knowing that Wynton Kelly, Paul Chambers and Jimmy Cobb were the rhythm section (and were also Miles Davis’ rhythm section) told me without hearing the recording that it would be something special. It exceeded my wildest expectations. Yet without that sideman info I might have passed on it as I stood before one of those old-fashioned record bins that were a staple of my youth.

So, what can we do about this “oversight”? This may be one of those places where the marketplace could actually work for us. If we communicate that we want player info connected with the tracks we stream, and if we support the streamers that make it available, we may see a change in that part of the industry. For example, there now exists a classical streaming service called Idagio that offers higher quality (uncompressed) audio files, includes player information, and even pays fees to musicians based on length of recording, not on number of streams. Most streamers pay based on number of streams (which limits payments for music longer than an average pop song) and then skew payments to favor the biggest stars. Many also use compressed audio formats that squeeze the dynamics out of our music. All of this puts jazz at a disadvantage in the marketplace. So we have to support those platforms that support us. If there currently are none, we need to make our voices heard. It is possible that in a crowded marketplace, some streaming platform may realize that fairer payments, better quality audio, listing pertinent info like the players and basing payments on length of time folks actually spend listening may be a successful business model. When such a platform emerges, we all should support it. Such support could help us begin growing our audience again!