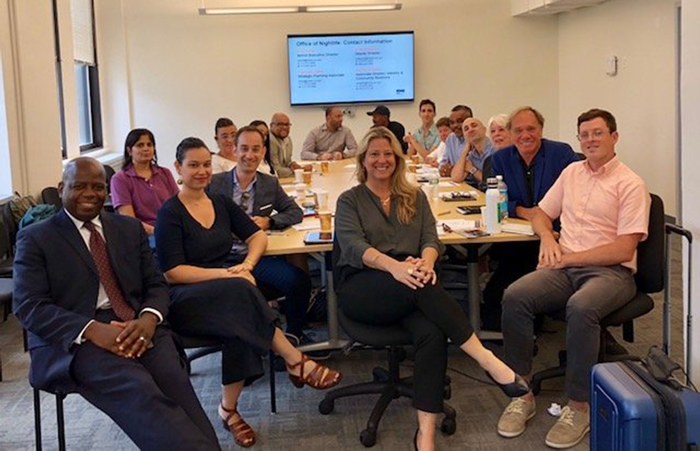 Alvester Garnett (near end of table in back left) and other musicians of the Nightlife Advisory Board and the Office of Nightlife.

Musicians finally have a say in what goes at night in New York City. I’m proud to report that earlier this year, I was appointed to the Nightlife Advisory Board. As a complement to the newly-formed Office of Nightlife, the all-volunteer board is charged with making recommendations to the mayor and City Council on ways to improve regulations and policies that impact nightlife establishments.

As a representative of the labor movement and the only instrumentalist on the board of 14 (which includes only four performers), I have the important responsibility of advocating for my fellow musicians. (Some of the other fellow performers on the board include the legendary rapper/producer Kurtis Blow, and the drag queen artist and LGBTQ advocate Marti Gold Cummings.)

The other 10 members include club/bar/restaurant owners, entertainment promoters or community board members. As you can see from its makeup, the board leans heavily towards owners. Knowing the stakes at hand, I’m tremendously happy to function as a voice for musicians, fellow Local 802 members and workers in our nightlife industry.

To get a stronger understanding of NYC nightlife, we must look back at the damaging history of the NYC cabaret laws, enacted during the prohibition period of the 1920s and subsequently repealed on Oct. 31, 2017 by City Council. Councilmember Rafael Espinal was crucial to the repeal efforts, and I was thrilled to be in attendance during the repeal ceremony.

The cabaret laws were essentially a dance ban for clubs unable to secure the necessary licenses for entertainment. Arbitrary enforcement led to discrimination against minorities and other vilified groups of nightlife owners, artists and patrons. Billie Holiday, Thelonious Monk, Charlie Parker and Jackie McLean were all negatively affected by the cabaret laws and effectively banned from making a living in NYC clubs.

(Ironically, the cabaret law’s restrictions on certain drums contributed to imaginative and groundbreaking drum accompaniment. Bebop drummers worked around the codes by eliminating tom-toms and using only snare, bass, hi-hat and ride, as dictated by law for certain club spaces.) 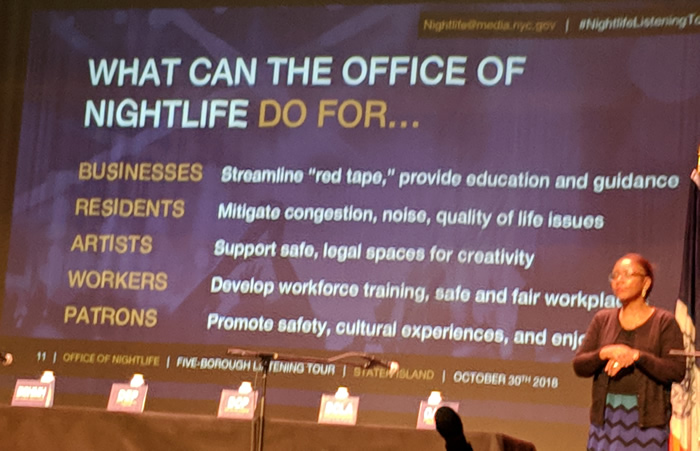 The Nightlife Advisory Board members have two-year appointments, and we are independent from the actual Office of Nightlife, which is headed by Ariel Palitz, the “Nightlife Mayor.”

Ariel recently arranged a five-borough listening tour, which just finished up. At each stop, Ariel led a Q&A session and invited other city agencies to speak, including reps from the departments of police, fire, buildings, city planning, consumer affairs, cultural affairs, environmental protection, health and mental hygiene, small business and liquor. (Interestingly, the Department of Labor hasn’t been present.)

At the Oct. 30 session, I mentioned my concern that the start times of the meetings have all been in the evening, which is ironic. This makes it hard for a great many of our fellow performers and nightlife workers to attend. I myself turned down several work opportunities in order to be there. I was disappointed that more Local 802 members didn’t show up, but Ariel assured me that there will be more sessions scheduled in the future. I’ll be checking on this. It’s absolutely important that the voices of working musicians be heard. As far as what I am recommending to the Office of Nightlife, my list includes:

(There is no guarantee that my suggestions will make it to the final cut of primary recommendations, but I will be fighting for them.)

If anyone has any concerns or ideas, please contact me at AlvesterGarnett@gmail.com or contact the nightlife office directly at nightlife@media.nyc.gov.

Fellow nightlife musicians: we must have our presence heard and respected! I’m happy to serve as a representative for us, but there is strength in numbers.