The annual meeting of the International Conference of Symphony and Opera Musicians (ICSOM) was held this past August in Park City, Utah. Orchestra delegates from all over the country met to discuss, argue and commiserate over the state of our symphony orchestras. While the tone was generally upbeat and one of solidarity among the representative players, the conference was overshadowed by the lockout of the Baltimore Symphony Orchestra musicians, which was in its 10th week at the time. The lockout extended another six weeks after that; happily, the musicians are now back to work. The one-year agreement includes a 2.4 percent wage increase over the 38-week season plus two weeks in the summer and the formation of a committee that will include musician participation in the planning of the future of the orchestra. We congratulate our colleagues in Baltimore for standing strong as they open their season and go back to the business of making world class music.

The Baltimore lockout was only the most recent aggression on our symphony orchestras perpetrated by their own management. Earlier this year, Local 802 rallied in support of the musicians of the Chicago Symphony Orchestra, who were on the picket lines for nearly seven weeks. 2010 and the Detroit Symphony lockout signalled the beginning of a decade of labor discord in U.S. orchestras. One of the delegates made a sobering and hard hitting point: sooner or later every orchestra will have its turn on the picket line. See this chart: 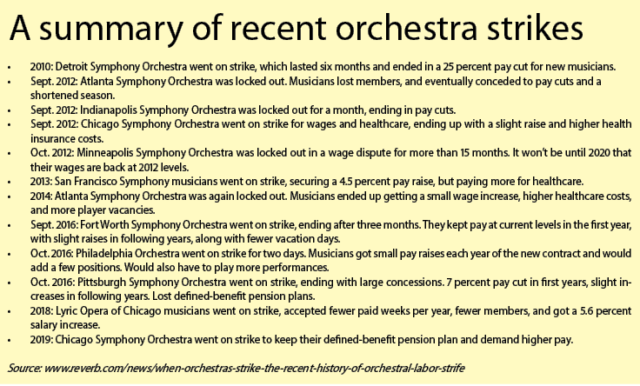 Kevin Case, ICSOM’s legal counsel, gave an interesting presentation analyzing management vs. labor’s strategies during recent labor disputes and their relative effectiveness. Critical analysis of our past triumphs and mistakes is absolutely crucial to future success. These discussions are essential to the “best practices” that our administration is developing at Local 802.

Although labor strife was on everyone’s mind, there were also many positive takeaways. Delegates presented “Orchestra Projects of Note,” which highlighted special initiatives that musicians are taking into their communities. Leelanee Sterrett, the Local 802 delegate from the NY Philharmonic, reported on Julia Wolf’s “Fire in my Mouth,” a powerful multimedia piece the orchestra premiered last season which illustrated the horror of the 1911 Triangle Shirtwaist Factory fire. There were discussions of new developments in hearing protection, presentations by AFM-EPF Retiree Representative Brad Eggen and the AFM Symphonic Services Division, and a robust discussion about diversity and inclusion in the industry.

Player conferences such as ICSOM present a valuable opportunity for musicians to exchange strategies and ideas. What can we do to cultivate a better understanding of our orchestra board and finances? How do we improve the culture within our organizations? How can committees better engage their colleagues in the work they are doing? How do we, as a union, guide our committees wisely and help them maintain solidarity, manage expectations, and deal with a wide variety of interests and agendas within our orchestras? These questions don’t go away once the contract has been signed. Engaging in these conversations now may make us just a bit stronger and wiser next time. 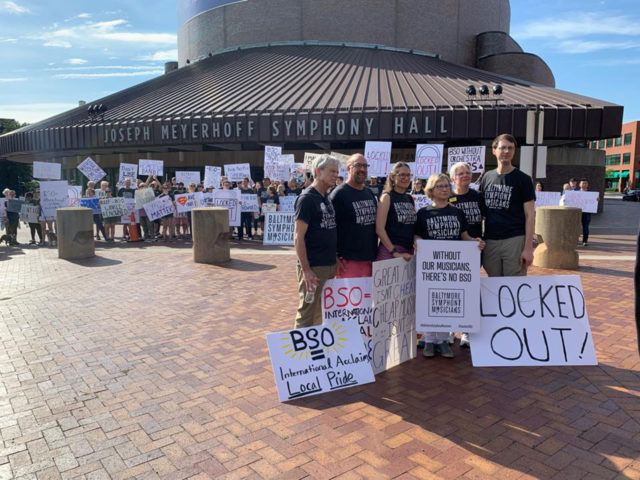 Musicians of the Baltimore Symphony on the picket line.

The Local 802 Executive Board recently approved new rates for public service engagements in 2020. We are often asked how the rates are established and why they are not published on our website. First, a very quick primer on the Music Performance Trust Fund, which appears on the Local 802 website:

“The MPTF is financed by money that the Fund receives from the recording industry, which contributes a small percentage of the sales of a record after 38,000 units are sold. These moneys are used to compensate the musicians at rates determined by local Trust Fund committees.

“The MPTF is independent of the union and is administered by a Trustee who is named by the U.S. Secretary of Labor. The Trust Fund sponsors performances that are open to the public without charge. All kinds of ensembles are sponsored by the MPTF, including symphonic bands and orchestras, chamber music, dance bands, jazz and rock combos and soloists. Performances take place in parks, concert halls, schools, hospitals, senior centers and other locations. The summer is the busiest season for MPTF jobs, but there is activity all year long.”

In 2003, the MPTF began to drastically cut each local’s allocation of funds due to steep declines in revenue coming into the fund from recording work. In order to be able to permit the same work to continue, the local established the Public Service Scale. This allowed musicians to continue the same type of work as long as the engagement continued to fall within the parameters of the MPTF. Currently, MPTF funds 30 percent of the total cost of an engagement but permits only one concert and one rehearsal. Additional rehearsals are not subsidized by MPTF, so the employer must apply to the Local 802 Executive Board for permission to use the same rate. (MPTF and Public Service rates pay the same). The rates are not broadcast publicly because employers must request use of the rates through the Executive Board. The use of the rates is not automatically granted. Since some employers are already budgeting for next year, we made those decisions early. The new rates are available through Marisa Friedman (212-245-4802, ext. 130).

As per a new directive of the AFM Pension Fund, all applicants to MPTF grant funding are required to sign an MPTF specific Public Service agreement in addition to the regular paperwork. We will be sending employers information about the change in the near future.