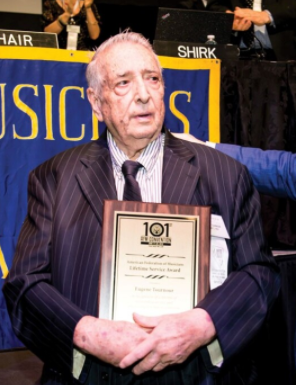 The last time I talked to Gene Tournour, the organizer, business rep and fixer, who retired in 2019 from the AFM and died on January 6 at the age of 84, I was on my cell phone with him as I sat on a bench in a park in Astoria. We shared the news of our lives and he asked me how things were going with Local 443, one of the many locals in the Federation he had taken an interest in. We had talked about getting together soon, but like a lot of plans, the pandemic got in the way. When I heard of his passing, I felt a pang of regret that I didn’t get to see him one more time.

Gene was not the kind of person you would expect to find working for the AFM. The staff at the Federation tends to be musicians who have left the profession and who have certain skills that can be put to use in running this resource-scarce union. We are fortunate to have some rather intelligent and talented people who can help make things easier for us in this difficult profession, one that is getting more difficult all the time. But Gene stood out as a staffer who had a broad vision of trade unionism and a history of fighting for justice and against corruption. He had a genuine love for musicians and ordinary people that made him eminently likable.

I met Gene when I worked at Local 802 in the late 90s. I warmed up to him slowly. He was quiet and unassuming, the kind who will speak only when there is something that needs to be said. He seemed to me a keen observer of human behavior and in the next couple of years we formed a bond of friendship and trust based on our disdain for the trade union movement’s over-reliance on lawyers and our mutual intolerance for bullshit. He had seen his share for sure, having worked with the Teamsters, where the leadership in many quarters of that union was tainted. But of course, Gene knew labor and knew that there were always fighters among the membership that ceaselessly work for democracy, integrity and internal change.

Gene was hired by the AFM’s Organizing Director, Paul Frank as an organizer in 1996, but soon became a valuable resource for the Federation on projects that were not strictly organizing. One of his assignments was AFM Local 661-708 in Atlantic City when that local went into receivership. Though he was hired as a trustee, he approached the job as an organizer. In 2000 I went to work for New York State Nurses Association as an organizer. One of my assignments was to organize a hospital near Ocean City. Gene was useful to our efforts there, having been working in Atlantic City, developing leadership for the local and building coalitions with the community. He shared his knowledge and connections with us, and the nurses’ campaign made important allies due to his assistance. I remember telling a nurse who worked with me in NYSNA’s organizing department about Gene. He was going to join us to hand out leaflets after a shift one afternoon. I spotted Gene standing a hundred feet away, clad in his signature trench coat and prescription shades. I pointed him out to my colleague. “He looks like he’s with the FBI,” she said to me. I got a huge laugh out of the remark, because the FBI was antithetical to what Gene was all about. But I had to admit, she was right.

Gene and I commiserated often about the state of the labor movement and the imperfections of our own union. But he understood what his job was and he kept his head down and did his work. When it came to the rank-and-file musicians of the locals he worked with, you would rarely hear him say anything negative about anybody. He genuinely loved people. His personal history as a civil rights leader — and later as a Teamsters staffer who worked for grassroots empowerment — matched that characteristic in him. It was impossible not to have respect for his knowledge and his humanity.

I wrote a song decades ago for my earliest political mentor, which I performed at his memorial. It seems fitting when thinking of Gene Tournour to share one of the verses of the song here:

Goodbye, Gene. Thanks for all you did for our union and what you gave this world.

Singer-songwriter John O’Connor, a lifelong union member and activist, served as Local 802’s Jazz Representative and Organizer from 1996 until 2000 and Local 802’s Recording Vice President from 2010 until 2016.