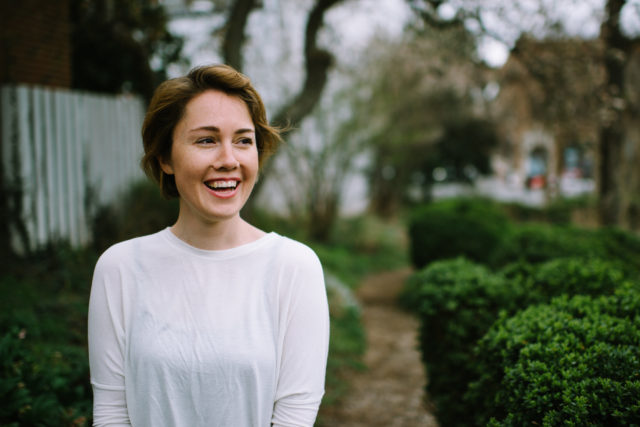 Caroline Shaw, the youngest recipient of the Pulitzer Prize for music, is a vocalist, violinist, composer and producer who performs in solo and collaborative projects. A brand-new member of Local 802, Shaw won the Pulitzer in 2013 for “Partita for 8 Voices,” written for the Grammy-winning Roomful of Teeth, of which she is a member. Recent commissions include new works for Renée Fleming with Inon Barnatan, Dawn Upshaw with Sō Percussion and Gil Kalish, the Orchestra of St. Luke’s with John Lithgow, the Dover Quartet, TENET, The Crossing, the Mendelssohn Club of Philadelphia, the Calidore Quartet, Brooklyn Rider, the Baltimore Symphony, and Roomful of Teeth with A Far Cry. Caroline’s film scores include Erica Fae’s “To Keep the Light” and Josephine Decker’s “Madeline’s Madeline” as well as the upcoming short “8th Year of the Emergency” by Maureen Towey. She has produced for Kanye West and has contributed to records by The National, and by Arcade Fire’s Richard Reed Parry. “Once I got to sing in three-part harmony with Sara Bareilles and Ben Folds at the Kennedy Center,” Shaw says, “and that was pretty much the bees’ knees and elbows!” Shaw studied at Rice, Yale and Princeton, teaches at NYU, serves as a creative associate at Juilliard – and also subs on Broadway. She has held residencies at Dumbarton Oaks, the Banff Centre, Music on Main, and the Vail Dance Festival. Shaw says she loves the color yellow, otters, Beethoven opus 74, Mozart opera, Kinhaven, the smell of rosemary and the sound of a janky mandolin. Local 802’s Maria DiPasquale caught up with Shaw over the summer to learn more about her life, her music and her inspirations.

Maria DiPasquale: How did your journey in music begin? Did you always know that you wanted to make music for a living?

Caroline Shaw: I grew up in North Carolina and started taking violin lessons when I was two. By the time I attended Kinhaven Music School at 15, I was in love with music. When I was ready for college, I knew I wanted to go to a school that had a strong music program but also other good university classes. So I went to Rice University in Houston. I studied with Kathleen Winkler and got an amazing orchestral training. I then went to Yale School of Music for violin and started singing more, playing for dance classes and writing music. I moved to New York in 2008 and did some freelancing, but I finally ended up at Princeton, where I started work on a PhD in composition.

Maria DiPasquale: Like a lot of our members, you wear lots of hats. You’re a violinist, a composer, producer, a vocalist…how do you balance all of that?

Caroline Shaw: I think they all feed each other. I enjoy how having a varied career means I can meet a lot of different people. I actually enjoy being a performer as much as a composer, because the writing environment can be kind of isolating. Playing with people in rehearsals and performances is really social. On a related note, I enjoy subbing on “Oklahoma!” on Broadway. It’s incredible to be so close to the actors and it’s a really amazing band. One of the things I love about it is that there are musicians in that band who I’ve played with on so many other kinds of projects and who I’ve known for a really long time. It’s just fun to see musicians in New York being part of so many different projects.

Maria DiPasquale: Does being both a performer and a composer let you enjoy different perspectives?

Caroline Shaw: Yeah, I think you develop a deep sense of empathy from many sides.

Maria DiPasquale: Let’s talk about the piece that made you the youngest composer ever to win a Pulitzer Prize for music, your “Partita for 8 Voices.” What inspired the piece? How did it come to be?

Caroline Shaw: I started writing the piece in the first year that the group Roomful of Teeth had formed. I’m a singer in the group, and I was just inspired by the conversations that we were having about what the voice can do, how the voice is an instrument, and all of the different colors that one can make beyond a traditional choral sound. I was really inspired by the artist Sol LeWitt, and also by dance and movement. I think I wrote the piece because I wanted to be able to choreograph some kind of movement, but since my medium is music, I created a dance piece out of music. I wrote a little bit each summer. It was something that I enjoyed digging into each year, and it became a larger thing that I never expected.

Maria DiPasquale: Looking back, what did that milestone of winning a Pulitzer mean to you? How did it impact your career as a musician?

Caroline Shaw: At that point, I was probably performing as a violinist 70 percent of the time and a vocalist 20 percent and writing music 10 percent or less. And now, I think a lot of those things have reversed. I write a lot more than I did then. I’m very grateful and lucky to have opportunities to write for different musicians and ensembles who I really admire. I keep growing with every piece. People really have no idea how much I’ve written in the last five years, but it’s a giant amount. I never expected that, but I just keep my nose to the grindstone and keep on working.

Maria DiPasquale: Not only are you the youngest composer to win a Pulitzer, but you’re really one of only a handful of women who have ever won that prize. Can I ask you what it’s been like as a woman in music?

Caroline Shaw: I’m really glad to see things changing, but I think there’s a long way to go in terms of equity and diversity not just in classical music, but in a lot of genres. I’m always surprised when I see so few female producers. They’re out there, but they’re not included in the room, and I’d love to see that change. I’m grateful to the women musicians and composers who came before me. I grew up not seeing really any female composers or conductors until I was in my 20s. I’m glad to see that changing, and I hope that I can perhaps be some kind of inspiration for the younger generation.

Maria DiPasquale: I know you collaborated with Kanye West on a few of his tracks. What was it like working with such a prolific and beloved artist?

Caroline Shaw: (laughs) There’s never a dull moment in Kanye’s world, for sure, and I love how he has so many different kinds of people in the room when he’s working. All these different ways of thinking and different voices are part of his creative process!

Maria DiPasquale: Are there any other artists who you’ve worked with who you want to mention?

Caroline Shaw: The deepest collaborative experiences are really with my close colleagues in Roomful of Teeth and also with string quartets. As far as big name artists, I’ve worked a lot with Richard Reed Perry. He’s a musician I really admire a lot, and Bryce Dessner is another one too.

Maria DiPasquale: I know that you’ve composed for films. What is that experience like?

Caroline Shaw: I love writing for film. It’s a wonderful way of coloring or putting a different light on a scene. I think about music very visually anyway, so even if I’m not composing for film, I create a kind of story or color palette or scene in my mind just to guide the music as I’m writing it.

Maria DiPasquale: What do you hope to do next in your career?

Caroline Shaw: I’m always trying to learn more, and I find the best way to learn is to dive into as many things as possible. I’m learning to say no to things, but if it’s something I’ve never done before or something I don’t know how to do, I’ll pretty much say yes. I’m working on a piece for the Philharmonia Baroque Orchestra with a choir and a couple of soloists. It’s a big piece. That’ll be in San Francisco in October. I finished a big piece for the LA Phil, which they performed in August. I’m collaborating with a visual artist who’s based in Paris; we’re going to do a project that involves textiles! I’ll also be working on a one-act opera for Lyric Opera of Chicago.

Maria DiPasquale: Your latest recorded work is called “Orange.” Can you tell us about the process and inspiration behind it?

Maria DiPasquale: Do you identify your compositions with any particular genre?

Caroline Shaw: I usually try to write for the person or for the instrument or for the occasion, and that sort of determines what it is.

Maria DiPasquale: In closing, is there anything that you’d like to say to your fellow union musicians?

Caroline Shaw: I love you all dearly! Let’s keep working hard and keep making music in this city. And stay kind!