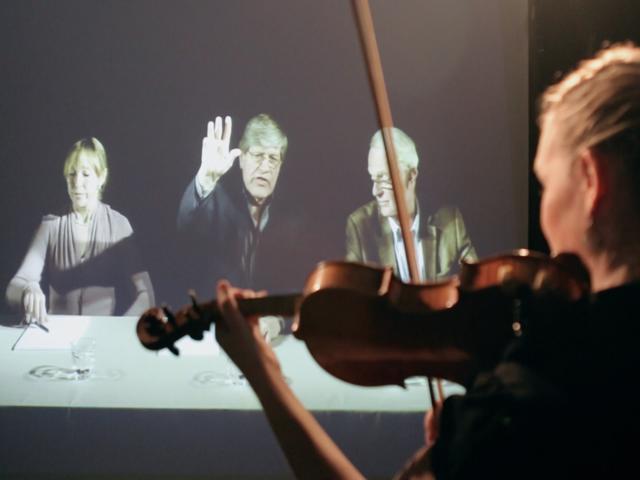 Do auditions make you anxious? Above, a shot from “Composed,” a new film about stage fright, featuring interviews with many well-known AFM members. The film was supported in part by ICSOM, which showed a clip at one of its recent conferences.

Through the lens of professional classical musicians, many of them members of the AFM, the film “Composed” (supported in part by ICSOM), explores the many ways we experience and can address performance anxiety. Faced with the judgment of peers, audience, conductors, and worst of all themselves, these musicians spend years trying to understand and overcome the physical and mental manifestations of their anxiety. Through their stories, we learn valuable lessons learned over a lifetime of professional performance; and we find that we are not alone in our quest to overcome the fear of failure and embarrassment. For anyone wanting to feel strength over fear and compassion over judgment, or simply seeking a closer look at anxiety and what makes us tick, “Composed” opens the door to a world of high stakes, high pressure, and peak performing. The story behind the film is an instructive lesson in how stage fright can be transformed into creativity, through unexpected ways…

It was during the fall of 2015 that I found myself lying on the floor of Ben Kamins’ studio in Houston. Kamins is a professor at Rice University’s Shepherd School of Music and former principal bassoonist with the Houston Symphony. We’d just finished an interview where I was asking Kamins about performance anxiety, something I’d been doing for the past year with orchestral musicians around the country, and I mentioned the daunting task to come of editing all these stories into a documentary. It wasn’t that I was worried we hadn’t captured enough compelling stories; it was that I wasn’t sure I could actually make this film.

When I described the many hours I’d soon be sitting facing a computer screen, Kamins asked me to lie down on the floor. Professor Kamins is also a certified Alexander Technique teacher, which is one of the reasons I wanted to interview him. He grabbed a small stack of books and put them under my head as I lay there and asked that I take some slow deep breaths. As I breathed,  I noticed tension in my back and shoulders and felt unease realizing how this had gone unnoticed. Even just talking about this intimidating task of editing was having a physical effect on my body and Kamins, perhaps noticing, recommended I do this periodically once in the thick of post-production.

This was neither the first nor the last time I’d find myself using some piece of wisdom or advice I’d heard while interviewing musicians about performance anxiety. Noticing where my tension was and how I was feeling physically was a practice I’d heard early on and couldn’t help but start to try and notice it in myself.

You see, the reason I’d started making a documentary about performance anxiety in the first place was because I’d experienced it. I’d been a student at the Boston Arts Academy and then at Boston University where I was majoring in percussion performance. It’d become a dream of mine to perform professionally with an orchestra, and so auditions, excerpts and long hours of practice became the norm. I did as my percussion peers did, and though I was progressing, there was one major problem. My hands would shake. Not all the time, but sometimes with no warning and other times more predictably. A few friends suggested things like bananas or beta blockers but I still didn’t fully grasp why this was happening.

It was during my third year at BU that I decided to leave music to pursue something else. I’d loved music but the pains of performance and the possibility for happiness elsewhere were enough for me to take a step back. The relief didn’t last long though and I found myself suddenly in a deep depression.

Unfortunately I think because we as musicians tend to define ourselves as “musicians” from such an early age, it can become entwined with our sense of worth or value. If we find ourselves faced with physical or mental challenges, they don’t just feel like the issue of the week, they threaten our entire existence. I was the musician in the family and the “creative one,” so it felt like I was giving up on the hopes so many others and I had for myself. Who was I if not a musician?

This question didn’t go away for a long time and for a few years I kept describing myself as a “former musician working in I.T.” The I.T. part came about from needing a job to support myself but was also a way of delaying my move to the next creative outlet, filmmaking. I’d always had an interest in making films but never came across an opportunity to explore it until that third year at BU.

Filmmaking came with so many opportunities to explore my creativity and at the same time escape all the issues I’d found in music. A music career would require taking auditions and putting myself again and again in the path of doubt. Doubt is not only what stopped me from playing like I knew I could; it eventually stopped me from wanting to practice or even enter a music venue. Filmmaking, however, didn’t have any of the environments which nurtured my doubt, it seemed. At least at first I wrapped myself in the newness of it all and found comfort being an amateur. Curiosity was now encouraged and my expectations reset.

These feelings lasted a couple years while I took time to travel and see life outside of my Boston bubble, but eventually those expectations started to build and suddenly I found myself six years past my decision to leave music for film with nothing to show for it. The past screamed “you failed at music, now you’ve failed at filmmaking,” and I couldn’t seem to argue with this voice. I’d given up twice, it seemed, and any support filmmaking had offered in my departure was now gone. Then, in one of those strange turns of life, I was presented with one of the greatest gifts an artist can ask for: time.

A year before I found myself lying on Professor Kamins’ floor, I’d been presented with a window of time to do something for myself. I’d struggled with what to do in this window but knew it’d have to involve picking up a camera. After those six long years of never making a film I’d simply run out of excuses. I now had time, some savings, and years of regret to motivate me to do what I’d said I’d do all those years ago: make a movie.

With no idea about how I’d actually do it, I knew I had to try. I dove in and started buying cameras, lenses, lights, and watched hours of YouTube videos about “How to Light an Interview” and “How to Fund a Documentary.” I was hooked on the learning of it all and motivated by this opportunity of time. Somehow though in my excitement, I’d forgotten the thing that had stopped me before when trying to pursue art, and that was my doubt. Doubt ruined everything I’d worked for once before and this time I was running straight for it but just with a camera in my hands instead of a pair of drum sticks.

This brings me back to Professor Ben Kamins’ studio floor where I’d been lying for a minute or so now. I’d released much of the tension I’d had and was now smiling. Smiling because in that precise moment I realized how I was going to become a filmmaker. Not in the sense that I suddenly understood how I’d shoot, edit, and distribute a film, but that I understood that these musicians were giving me exactly what I needed to conquer my fears as an artist. All of the questions that had followed me from music and that were holding me back as a filmmaker were being answered. Before this I’d slowly started to fill the past year with that same doubt but suddenly lying there on the floor I knew that I would finish this film. This movie was not just about musicians facing the stage, it was about me facing my fears as a creator. Without their support and advice I don’t know if I ever would’ve had the perseverance to finish this film.

Musicians in the end were still my greatest teachers. Not through any filmmaking class or YouTube video but through conversations with musicians did I learn the ways in which to address my anxiety as an artist. I therefore owe this very film to those who make up its content. We all deal with performance anxiety to some degree and it’s a tragedy not to take advantage of the problem solvers sitting on stage practicing how to perform each and every night.

Looking back now, it’s clear to me that my passion for experiencing music didn’t mean I needed to be producing the sound myself. That being said, listening to our musician interviews is nothing short of inspiring and remind me of the gift musicians give us each time they step on stage. I’m so grateful for what I’ve learned from this process and don’t know if I could’ve done it without the wisdom of so many hard working AFM musicians. They deserve thanks for sharing their experiences, and enabling others to share their art.

So, in the end, I turned my own stage fright into creativity. My film “Composed” became a documentary feature about how classical musicians both experience and can address performance anxiety. Featuring musicians, educators, and mental health experts, the film explores how we can address this issue in ourselves and in our culture. To learn more and watch the film, visit www.composeddocumentary.com.

If you appeared in this film, or if you have helpful hints about how you’ve conquered stage fright, please e-mail Allegro@Local802afm.org to share your story. For more help with stage fright or performance pressure, see our ongoing column with Dr. Don Greene. 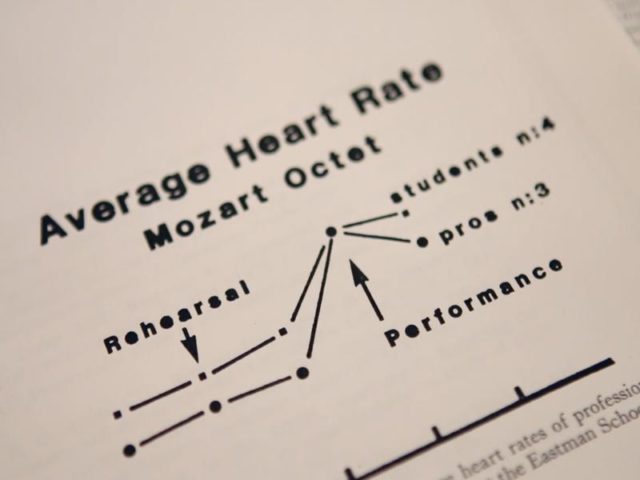 “Composed” contains data about physiological responses to stage fright. Above, a graph showing how a musician’s heart rate peaked during the performance of the Mozart octet.