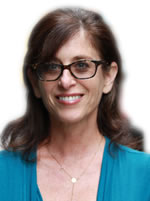 May is Labor History month! I’d like to take this opportunity to share the story of my paternal grandfather, Benjamin Paisner (1890-1967) and my father, Gilbert Paisner (1924-2014). Together they ran a textile manufacturing company on the Lower East Side and employed unionized workers. They were great believers in working under favorable conditions for fair wages. Parts of this story were told to me by my father (many times throughout my life) but much is thanks to my brother Jon, who had the good sense to video my father telling his life story the summer before he died.

Like so many in the U.S., I am descended from immigrants. And, like many Jewish people in New York City, I am the product of Eastern Europeans who fled religious or ethnic persecution in the early 20th century. My grandpa Benny was a Russian socialist who left his village near Kiev in 1910 to escape the poor treatment of Jews. In his case, he was not from a religious family, but simply being Jewish was enough to mark him. Benny was imprisoned twice for political activity as a teenager and had a scar on his forehead from an attack by a Cossack. In jail he was called “Comrade Jew Bastard” by the Russian guards. Since there was compulsory military service at the time, and as Jews were treated particularly terribly in the military, Benny fled Russia at the age of 20 with one of his brothers and came to NYC. At Ellis Island their name was changed from Pevsner to Paisner.

The brothers lived on the Lower East Side and went into a series of businesses. First they imported hair from China and made wigs. As the story goes, they had to use hydrochloric acid to lighten the black hair. They found a loft from which to operate the business and worked on the roof to submerge the hair into the toxic vats of chemicals. The brothers would eat raw butter every day to “protect their lungs from the fumes” (not sure of the science behind that!) and their arms would turn green from contact with the toxins. They had some success and gradually brought their father and seven other siblings over to the U.S. My great-grandfather was 55 when he came and they treated him like a retired old man. The family remained on the Lower East Side for many years, likely in a tenement building.

Fortunately, the brothers moved into other, less dangerous textile-related businesses (we still have hundreds of beautiful beaded glass lamp pulls imported from Europe in the 1930s) and also bought and sold real estate. They  met with some success. My father called his dad the “socialist capitalist.” My grandfather could always be counted on to employ or help any relatives or friends of relatives that came from Europe.

Ultimately Benny founded the Modern Manufacturing Braid Company, making fabrics and trimmings for handbags and shoes. He fell in love with his bookkeeper Anna, who was also an immigrant from Eastern Europe. They married in 1920, had two sons, and bought a house in the Bronx and a summer bungalow in Mohegan Colony, a politically active community of leftist Jewish immigrants near Croton-on-Hudson.

My father always spoke of his happy childhood growing up in the Bronx, which included stickball and baseball on the streets and in the parks with the neighborhood kids, and active summers at Lake Mohegan with friends that became like brothers for life. He spoke of going to the political meetings that were held there in the evenings. He and his friends would listen to the arguments of the socialists, anarchists and Trotskyites. My dad was never politically active (though he was a devoted Democrat), but his father’s socialist views helped shape his attitude towards the many union workers he later employed.

When the depression hit in 1929, the family lost their Bronx house but managed to regain their footing a few years later and moved back to the same street. Though my dad was a young child at the time, he always remembered that feeling of loss.

My father graduated high school at 16 and then went to work in Benny’s factory for a year before starting NYU. He turned 18 the summer after his freshman year and enlisted in the Army as soon as he could. He and several friends went to enlist on the same day – they were all itching to get into the war and fight Hitler. My father’s older brother was already deployed as an Air Force pilot. My grandmother prayed that they wouldn’t take my dad because of his nearsightedness and allergies…but they did. After basic training he took a train to California and a 46-day “hellish” boat ride to Asia with 5,000 troops on a ship designed to carry 450.

Gil was stationed in northeast India, became fluent in Hindustani and drove a truck on the Burma Road, carrying supplies by convoy over the Himalayas to Chang Kai-Shek’s forces in China. He would tell of driving at night with the headlights painted black and only a pinprick of light to see the road, so the enemy couldn’t see the trucks from the air. Sometimes they came under fire from Japanese planes and some men were lost. All the drivers wore thick belts to help protect their kidneys and internal organs from bouncing over the mountainous dirt roads. When my dad later did have some internal bleeding, he took a break from driving trucks and instead managed the supplies that were sent into China by plane. He told us stories of hours passed gambling in card games, of playing in ping-pong tournaments held for all the troops in Asia (played in Calcutta in “Monsoon Square Garden” – a huge hangar set up like an arena), of bouts of dengue fever, of slathering his mess hall toast with lots of jam to cover the bugs, and of joyfully receiving care packages from home sent months earlier by my grandmother, who also wrote letters to her sons every single day. 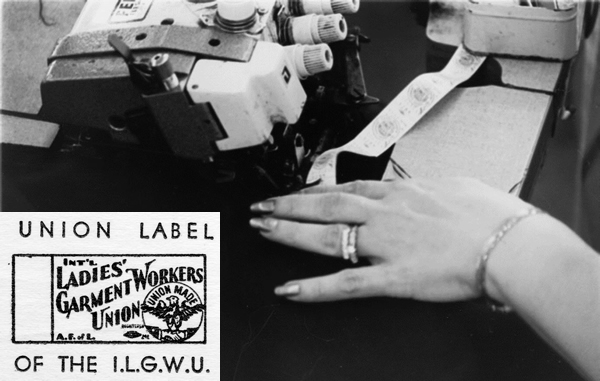 Making union labels on a machine and a close-up of the label. The ILGWU and its sister unions protected textile workers. Photo via ilgwu.ilr.cornell.edu/timeline/union-label-timeline.html

My dad served for three years. He talked of seeing the poverty in India – people literally dying of starvation in the streets – and what a shock that was to him. He understood how lucky we are in the U.S. He spoke about the Army being the great equalizer. The young men in his outfit came from all walks of life. His time in the war gave him respect for all people, regardless of education or background. And he carried that with him for his entire life and got along with anyone and everyone.

My dad returned home in early 1946, worked in Benny’s factory for several months and then finished NYU on the G.I. Bill. He joined the family business full time after graduating.

My grandfather owned the building at 708 Broadway (near the corner of East 4th Street), which housed the factory.  Several of his friends had partnered in the purchase. There were 124,000 square feet over 10 floors. Some floors were rented out to other businesses. The company employed about 50 people who worked the machines – large looms on which the fabrics were woven. There were many immigrants from all over the world working there, and at some point they unionized with the United Textile Workers of America, which later merged with the ILGWU. My dad often spoke of how they all became like a family. Everyone called him Gil and many worked there for their entire adult lives. I remember visiting as a kid and there was great affection between my dad and his employees. After my grandpa retired in the late 1950s, he would often go down to the shop and sit with the men who worked the looms because he missed seeing them every day. 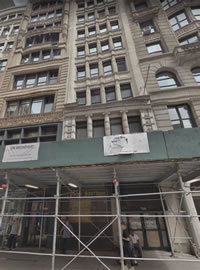 The current site of 708 Broadway, which was a former union factory. Photo via Google Maps.

There were about a dozen similar small manufacturers in the neighborhood and the union dealt with them all as a collective. My dad got along well with the union leaders, though he said they often busted his chops. He ran the factory 24 hours a day during busy times and had to pay a fortune in overtime. But he recognized the need to do it and the workers’ right to earn it.

In the late 80s, my father was forced to close the business. (Much like the loss of recording work in NYC, all the textile manufacturing went elsewhere.) My dad told of how the union wanted a three-year contract in his final negotiation. He knew he was going to have to shut the business and didn’t want to commit to three years. Eventually the union worked with him.

My dad liked to tell a funny story about a time in the 1970s when a friend gave him a good tip on a horse. He said all the workers would regularly bet on horses with the bookie who operated from the barber shop down the street. Though my dad played gin rummy for small change daily on the commuter train, he never bet on horses. But he told his shop steward about the tip. It seems the entire shop bet on this horse, which won the race at 28:1 odds. All the workers made a fortune! They said to my dad, “If you can get us more tips like that one you don’t need to give us raises!”

Another favorite anecdote was about the time my brother Dan, at about 8 years old, asked him how much money he made. My father said he made enough. But my brother said, “Well, if you have 50 workers and pay them each $1 a week less, then that would be $50 a week more for us.” My dad, the son of the Russian socialist, was mortified!

In the 1970’s my father expanded the business into the manufacture of blinds and drapes. He had the opportunity to buy a neighboring building from a friend for $100,000 but didn’t need all the space. The NYC buildings were basically worthless then! My father sold 708 Broadway for a nominal sum when he closed the factory in the late 1980s. It enabled him to retire comfortably. Though he paid to carry the building on his own through the 70s and 80s, he made sure to pay all the families of his fathers’ partners, many of whom were deceased. The neighborhood has since boomed and 708 Broadway was recently resold for $157 million!

My father was very gratified by the business he helped to build, which had many successful years. But he was most proud of his relationships with his employees and being able to provide a good living to so many. He kept in touch with several who worked for him until his death in 2014. I would like to think that both my grandpa Benny and my father would be proud of the work I am doing at 802.

Caryl Paisner is a cellist and a member of the Local 802 Executive Board.