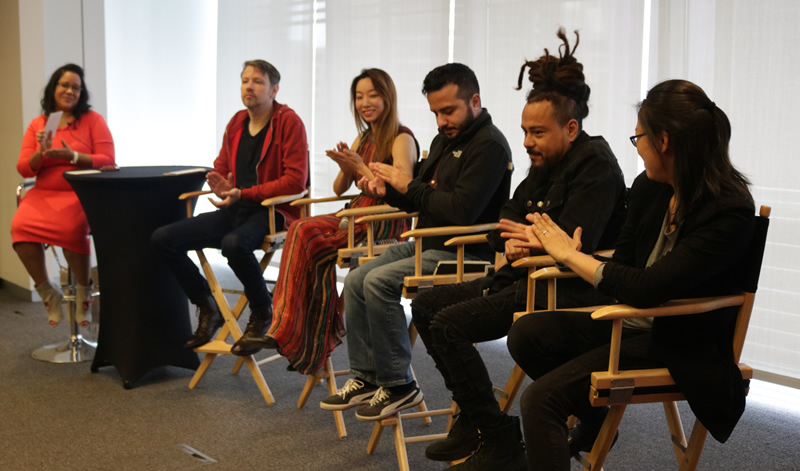 The voices of immigrant artists were heard loud and clear at a recent panel convened by the Immigrant Arts Coalition and the New York Times Latino Network. “American Dreamers: The Immigrant Artists’ Voice in the USA” covered the panelists’ immigration stories and how art and music have influenced their own work and the immigrant narrative in the United States.

Grammy-nominated Itawe Correa of the Latin band Locos Por Juana was proud to share the story of his path from undocumented person to permanent resident. Correa came to the United States from Colombia to escape the violence caused by the war on drugs there.

“For me, it’s very important to represent all immigrants through our band, given we have the opportunity to speak out for those to afraid to do so,” he said. “I want to share my story and help others.” Much to the audience’s amusement, the witty front-man also detailed his recent encounter with Immigration and Customs Enforcement. Correa recalled, “I was stopped at a checkpoint on my way to the Grammys. When they decided to let me go, they asked me to say at my Grammy speech that the immigration police aren’t that bad!”

Another voice heard was Korean immigrant and Local 802 member Sita Chay, who is the founder and executive producer of the all-immigrant band Cosmopolis Collective and a member of the all-female mariachi band Flor de Toloache. She said, “It’s up to us to awaken the responsibility among fellow musicians and fulfill that ability to connect.” Chay was the first Korean to win a Latin Grammy.

Fellow panelist Sebastian Noelle, a German immigrant and jazz guitarist, told the audience, “As a musician I have learned that rhythms and melodies have the power to shape and transform communities.”

Noelle added, “Art has always been integral to the immigrant narrative, telling stories about where we come from and where we want to go. In today’s political climate we can use it as a counterbalance to greed and nationalism.”

Noelle, a member of Darcy James Argue’s Secret Society, also explained the drastic mindset change in his native Germany, which evolved over the past 80 years from a violent government based on white supremacy to a progressive country led by a woman. “The people changed,” said Noelle. “If I have to go back to Germany, it wouldn’t be the end of the world. I can’t imagine the situation of others who have nowhere else to go, especially those who have escaped oppressive regimes or war.”

DREAMer pioneer Juan Escalante brought a fresh perspective to the panel as an activist and a DACA recipient.  He said, “One of the biggest motivators in the fight for immigrant rights is art. If you think about the amount of creativity, resilience and power that immigrants hold, then you can easily visualize the way that their culture and knowledge is infused into their work.”

Escalante added, “The immigrant community is a tapestry of songs, tales, and experiences that come alive whenever injustice manifests itself. That is why you see so many colorful displays, posters and chants on and off the field.”

He pointed out his family pays taxes and works hard and yet they are still looked upon as criminals. The Washington, D.C. resident also explained how his family escaped from Venezuela and established roots in Miami. “It was an immigration lawyer’s fault that we’re undocumented,” he said. The negligence of that lawyer had a domino effect in the status of his entire family.

Finally, the panel was honored to include pianist Tereza Lee, who has been lauded as the “original DREAMer.” It was her story that inspired Sen. Richard Durbin and Sen. Orrin Hatch to introduce the DREAM Act in 2001. She told the audience, “My piano was my path to freedom. It was because of music that I was able to gather letters of support from donors, board members of the music school that I was attending, teachers and other famous musicians, and present them to Senator Durbin.”

Lee’s family escaped the Korean War and moved to Brazil. Once there, they lost their livelihood due to rampant crime and decided to come to the United States.

Lee spoke about the power of art to enact social change. She said, “Art displays the pain and suffering of immigrants through pictures, photos, murals, dance, music, poetry, film – the creativity is endless. The way I see it is that the DREAM Act movement was a seed started by creative students who shed light, awareness and support for the other undocumented communities. This movement is now focused on bringing justice to all 11 million undocumented immigrants – and future immigrants.”

The panel was part of the Immigrant Heritage Week celebration in NYC. The city and its community partners across the five boroughs hosted more than 50 events and programs honoring our rich immigrant heritage and celebrating the fact that New York City is home to more immigrant residents today than in over a century.

Local 802 theatre rep Marlena Fitzpatrick Garcia is a writer and journalist, and the president of the Immigrant Arts Coalition. For more information, see www.ImmigrantArts.org.