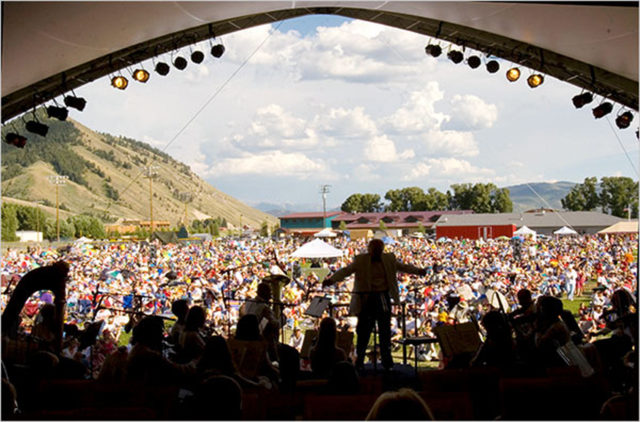 When three musicians were not invited back to the Grand Teton Music Festival in Jackson Hole, Wyoming, solidarity saved the day. Above, the festival pictured on its website, at https://wyoarts.state.wy.us/grand-teton-music-festival

Unions are the best protection for workers – but many people don’t know that workers who are not part of a collective bargaining unit and who are not represented by a union also have rights under the National Labor Relations Act. Specifically, Section 7 of the NLRA protects the rights of all employees, whether they are unionized or not, to engage in “concerted activity,” which is when two or more workers engage in action for their mutual aid or protection about their terms and conditions of employment. A single employee may also engage in protected concerted activity if she or he is acting on the authority of other employees, bringing group complaints to the employer’s attention, trying to induce group action, or seeking to prepare for group action. Thus, if an employer terminates or takes adverse action against a group of non-unionized employees due to their efforts to change or improve their working conditions, the employer may have engaged in an unfair labor practice that can be pursued before the National Labor Relations Board.

Recently, the Grand Teton Music Festival in Jackson Hole, Wyoming, made the unfortunate decision not to invite back three longstanding members of the festival orchestra (two of whom are members of the orchestra committee) due to their public opinions concerning the artistic direction of the festival. This alone potentially ran afoul of Section 7 of the NLRA. But because of further concerted activity, public outrage and the threat of unfair labor practice charges, the festival capitulated and invited the three disenfranchised musicians back for its 2020 season. This was a huge victory for the Grand Teton musicians – and for all non-unionized freelance musicians throughout the country. Here’s what happened.

During “town hall” meetings held by management during the festival last summer, musicians expressed concerns over the artistic direction of the festival. Specifically, they voiced their opinion that the festival was becoming less focused on performances by the orchestra – and more focused on outside groups – and that this was not in the best interest of the festival. One would have expected that in holding such town hall forums, management would have expected and welcomed an open discussion, free from retribution. Such was not the case. Some time later, the three musicians who made the main comments at the meeting were advised by the festival that they would not be invited back for its 2020 season due to their “disruptive behavior” and “comportment.” One did not have to read much between the lines to see a direct correlation.

What was remarkable was that after the three were not invited back, there was a huge outpouring of support for them and outrage directed against the festival, both from the public and from fellow orchestra members. A petition circulated by the orchestra committee demanding reinstatement of the “GTMF 3” garnered over 1,700 signatures, and 100 orchestra members informed the festival that they would not return for the 2020 season if the three musicians were not rehired. (All of these actions the musicians were doing in support of their colleagues were protected activity under Section 7.)

The festival’s music director, Donald Runnicles, submitted a letter to the board stating that he would not return either if the matter wasn’t resolved. Letters signed by past festival board chairs and directors called for not only the reinstatement of the musicians in question but also for the ouster of the festival CEO who was responsible for the musician firings. The orchestra committee won further media attention through press releases and interviews, which mobilized even more local support for the “GTMF 3.” Finally, I was retained by the orchestra committee to pursue unfair labor practice charges in the event that the musicians in question were not invited back, and a demand letter was submitted to the chair of the board to that effect.

Finally, at an emergency meeting of the full festival board on Dec. 3, the board invited these musicians back. While this was a tremendous victory, and one that demonstrated the true potency of “concerted activity,” the victory was not complete since the board declined to fire the festival’s CEO. With him remaining at the helm, the possibility of retaliation and further legal violations loomed. However, as the result of further pressure by the community of players, at a Dec. 13 Board of Trustees meeting, the CEO resigned from his position. Now there is real cause for celebration. Orchestra committee member Martin Andersen told me that the committee “applauds the decision to re-invite our esteemed long-serving colleagues to the festival orchestra.”

Andersen also said, “This positive outcome is the result of many factors, not the least being the willingness of the Grand Teton Music Festival musicians to stand steadfastly together in support of our colleagues. In light of our concerns about festival actions in the last several years, we will continue to challenge the festival board to re-assess its long-range plans for the festival, as well as its governance and executive leadership.”

Ultimately, this taste of success could prompt this group of musicians to unionize their job with the festival.

However, the festival has historically taken the position that its musicians are independent contractors and thus not entitled to unionization or the protections of Section 7 of the NLRA. Federal law would ultimately guide the answer to this question. The festival satisfies the law’s interstate-commerce threshold and, in my mind, clear legal precedent supports the conclusion that these freelance musicians are in fact employees. Therefore, I believe that the workers are eligible to unionize and, in any case, file unfair labor practices now or whenever needed. (I wrote in these pages about a similar case with the Lancaster Symphony. The case was Orchestra and Greater Lancaster Federation of Musicians, Local 294 AFM, 357 NLRB No. 152.) On the other hand, I also wrote recently here about an unfortunate situation last year with the Greater Bridgeport Symphony, where reinstatement of non-unionized musicians was denied by the state labor board because the musicians were deemed under state law to be independent contractors. Federal law did not control that outcome.

Fortunately for the Grand Teton Music Festival, this issue is moot for the time being since the musicians were successfully able to pressure the board to do the right thing…for now. We’ll keep you posted on the brave journey of these musicians.