UPDATE: Ed Xiques passed away on Dec. 4, 2020 at the age of 81 after being a member of Local 802 since 1963. Please enjoy the interview below that we published in 2018, and read additional tributes on Ed’s Facebook page here. 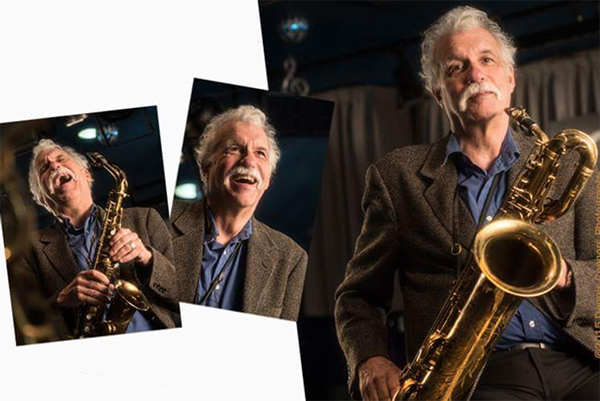 “Thad says you got the gig. Those were some of the sweetest words I ever heard. I just lucked out, really. The band was loaded with fantastic players, and it was the one band that I had the feeling I’d love to play with at some point.” So says saxophonist Edward Fabian Xiques Jr. as he remembers his time with the Thad Jones-Mel Lewis Orchestra, his musical influences, and his career as a musician, composer and educator. Ed performed with Thad and Mel from 1971 to 1978 at the Village Vanguard on their famous Monday night shows. He also played on many of their recordings, and went on the road with them in Europe and Japan.

I became fascinated with the music of Thad Jones thanks to the infectious enthusiasm of Local 802 member Tim Newman, a professor at William Paterson University. I was a grad student there, and I ended up writing “Electric Thad: Thad Jones and His Use of Electric Instruments and Rock Styles in the Thad Jones-Mel Lewis Orchestra.” (Another connection: Thad and Mel had taught at William Paterson years earlier, and Thad was the first-ever director of jazz studies there.)

I already knew Ed’s playing and composing with Diane Moser’s Composers Big Band, and I was excited to spend time talking to Ed, who’s been a member of Local 802 since 1963. He turns 79 on Oct. 9, so happy birthday, Ed!

Ed’s last name comes from his father’s Cuban heritage and is pronounced Hickus (with the emphasis on the first syllable). His father also has Irish roots, and his mother’s side is Scottish.

Linda Miksza: How did the gig with the Thad Jones-Mel Lewis Orchestra come about?

Ed Xiques: Jerry Dodgion called and asked me to come in and sub on baritone sax for Pepper Adams. After the fourth Monday night, Jerry said, ‘Thanks man. Pepper’s coming back next week.’ I said, ‘Okay great. If you need a sub somewhere else, just let me know.’ So Jerry said, ‘Come in on alto next week.’ On every gig I did, I noticed there were different alto players. This went on for another month, and then Jerry said, ‘Thad says you got the gig.’ I heard Thad’s band on the car radio and had been down to see the band at the Vanguard once or twice. That was the one band I really wanted to experience, so I really was lucky. The music was so powerful, so unique.

Linda Miksza: What was it about the sound of the band that grabbed you?

Ed Xiques: I would say Thad’s writing. And Mel’s drumming. When I was in high school in the 1950s, I used to go to Sunday afternoon concerts at the Glen Island Casino in New Rochelle, New York. I lived in Pelham, which was about ten minutes away. I heard Basie, Louis Armstrong, Omer Simeon, and a bunch of great players. And Basie’s band was at Birdland, 22 weeks out of the year. So I heard Basie’s band a lot, and Thad was in the trumpet section. I was just waiting for him to play a solo! He was such an incredible, inventive soloist. And Joe Newman was in the band and took most of the trumpet solos. He was great too. So, to me it was a very special moment when Thad would play a solo because he was going places harmonically and melodically. I never did get over that I was playing with him every night. I was a fan of Mel’s too. In high school, my friend Ted Pease, who was a drummer, used to listen to those Stan Kenton records that Mel was on. And the “Contemporary Concepts” album was with Charlie Mariano, one of my favorite alto players, and I think Al Porcino was on those records, who later played trumpet with Thad and Mel’s band quite a bit. I thought that was the best band Kenton had, when Mel was playing drums, with Charlie Mariano on alto sax, along with Stu Williamson and Al Porcino on trumpet. I always loved Mel’s playing. It was so smooth and just so musical and tasteful, not overbearing at all. Everything was perfectly set up and the phrases were so beautiful. Some drummers are much more aggressive. He never tried to take over, which made him so easy to play with. I remember the first night I played with the band, on baritone, I’m sitting way over in the corner, behind the post, at the Vanguard, Mel is right there! From the first tune, the way it felt with him playing the drums, was unbelievable. With Mel playing the drums, it was like riding in a Rolls Royce. It felt so perfect. And I was nervous for years playing in their band. Yeah! Especially if I had to stand up and take a solo. It wasn’t that often, because everybody was such a great soloist.

Linda Miksza: How often did you get to play solos?

Linda Miksza: Did you have any favorite gigs that you can remember, or favorite sessions?

Ed Xiques: I guess what comes to mind is when we played in Munich at a club called the Domicile. One summer we were in Europe for four months, and that club was our home base. We went to Cologne and once to Spain. We did different gigs in Europe, but then we’d come back to Munich and play there. And that’s where we did the “Live In Munich” album. It won a Grammy and I think that was Mel’s favorite album with the Thad Jones-Mel Lewis Orchestra. The ensemble playing is incredible. We were playing every night. After a few gigs in a row, that band was unbelievable.

Linda Miksza: What other countries did you tour?

Ed Xiques: All over Europe at jazz festivals. Perugia, Italy was a nice spot. We were in Japan, at a beautiful old concert hall in Osaka with a big wooden stage. I played there with Woody’s band too. I got off the train in Kagoshima, and it was the first time I ever saw a live, smoking volcano.

Linda Miksza: Was that scary?

Linda Miksza: When you were playing in Thad’s band, were you in Ten Wheel Drive at the same time?

Linda Miksza: That would be considered more of a jazz-rock band stylistically?

Ed Xiques: I guess so, yeah. It had a lot more subtleties to it than a rock and roll band. And the singer at that time, Annie Sutton, was great. The band was enjoyable, but it was nothing like playing Thad’s music.

Linda Miksza: How did it compare?

Ed Xiques: It was a totally different thing. Everything Thad did was so special. His melodic senses, his harmonic senses, his ensemble writing.

Ed Xiques: We did two albums, for Columbia.

Ed Xiques:No. John La Barbera wrote the bulk of the charts. And I think there were some charts by Wayne Andre, the trombone player. It was a great band. But again, nothing like Thad and Mel’s band and the writing.

Linda Miksza: Was it more straight ahead?

Ed Xiques:I would say it was more commercial. In the big band genre, it didn’t have the depth that Thad’s band had. What does? Duke Ellington. To go back to when I was in high school, I used to go hear Duke Ellington’s band a lot. So to be able to meet some of these guys and play with some of these guys… I went to Boston University, and I was playing with Phil Barboza in a Latin band. When I was 19, we played a gig in New Bedford, Massachusetts. Paul Gonsalves is from there, and he came and sat in with us. He played “Body and Soul.” And I always loved Johnny Hodges, and Harry Carney and the trombone section. Quentin Jackson was playing in the trombone section – his nickname was Butter. I think the first jazz record I ever bought was “Ellington Uptown.” These were the days of LPs. I had this record player in my room and I would lay on the bed listening to “A Tone Parallel to Harlem,” and Quentin was playing these plunger solos.

I remember a gig with Thad and Mel in Denver, and we had just recorded “Suite For Pops.” Quentin Jackson was in the band then. Something happened with the recording of Quentin’s trombone solo and we couldn’t use it. We had to re-record that one section with his plunger solo, and Janice Robinson ended up playing because Quentin couldn’t be there. On the live gig, he and Thad would be out in front of the band going back and forth. You could almost hear words and little remarks, but it was just the plunger. Then Quentin played a plunger solo. He was such a beautiful player. And the whole audience stood up and cheered. He just had that ability to touch people. Like Clark Terry too, who I never played with. I would love to have. I was always a big fan. Just one note from Clark, made you feel great. And you knew who it was too, from just one note. And he was in that Duke Ellington period when I’d see the band a lot. There is a version of “Take The A Train” on “Ellington Uptown,” with vocalist Betty Roche. It’s like a whole suite, and Paul Gonsalves’ playing in this as a ballad, and then the tempo doubles, and then it doubles again. There’s a version of “Perdido” where Clark Terry plays along and takes a solo. I got sidetracked talking about Duke, because that was one of the few bands that had the depth that Thad’s music had…for me.

Linda Miksza: Thad has said that Duke Ellington was a real inspiration to him, writing-wise.

Linda Miksza: What about your composing? Were you writing at the time when you were with Thad and Mel?

Ed Xiques: I had written a few things, but never with Thad and Mel. Whatever I had written at that point wouldn’t stand up against anything Thad wrote when he was asleep. (Laughs)

Linda Miksza: Do you think Thad inspired you?

Ed Xiques: Sure, everything he did was an inspiration. Yeah, absolutely. He was a master. He’s one of the great composers of any kind.

Linda Miksza: Do you have any stories about your band mates, or do you keep in touch with anybody?

Ed Xiques: Well, Jerry Dodgion and I keep in touch. Jerry is one of the most beautiful human beings on the planet. He’s a great person, and a wonderful alto player. He’s another one. You hear him play a note or two and you know just who it is. We used to hang with Pepper too, and Jimmy Knepper. Pepper and Knepper. They made an album together. We used to hang out after the gig at the Vanguard for a while. Or in Munich at the Domicile.

Linda Miksza: That must have been pretty late at the Village Vanguard, right?

Linda Miksza: Because the gig started at ten…

Linda Miksza: And you did three sets…

Ed Xiques: Sometimes we’d do the last set at three in the morning. We’d do a few tunes, and then we’d hang out for another couple of hours. (Ed is lost in thought.) It was a beautiful time.