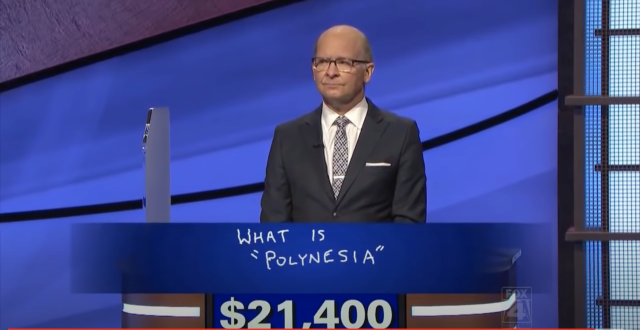 Local 802 member Jon Spurney made it to Jeopardy — and won!

People have always told me I should be on Jeopardy. Why? Because I’m one of those jerks who always yells out the answers while watching the show. Last year I moved from New York to L.A., and since the show is taped about 15 minutes away from my apartment I decided to take the online test to try and be a contestant.

The last gig I played before everything started locking down due to Covid was (believe it or not) on a cruise ship. On the night before we sailed they held a reception for everyone performing on the ship, and I was pleased to make the acquaintance of Ken Jennings, the winningest Jeopardy contestant of all time (he was appearing on the ship in a mock quiz show). I told him about my love for Jeopardy —  I had watched it basically every night of my adult life and it was an intrinsic part of my evening routine. But I didn’t, either out of a sense of caution or embarrassment, mention to him that I had taken the online test. When the reception was over I took the elevator up to my hotel room. I did a last pre-bedtime check of my email, and there was a message from Jeopardy.

Thus began a nine-month odyssey that ultimately resulted in my actual appearance on the show. It’s a fairly slow and arduous process. You have to pass the online test. Then you have a personal audition, basically to ensure that you’re capable of appearing comfortable on camera and have an interesting background and/or career (I think being a working musician helped in that department). Then you have to perform well enough in a mock game against other prospective contestants who have also passed the first two hurdles. We were told that 150,000 people take the test each year and only 400 make it all the way to actually being on TV  —  a 0.26 percent acceptance rate.

I passed the audition, did fine in the mock game, and finally got an actual taping date, about eight months after I had received that first email. This set off a frantic two-week period of cramming  —  I had watched the show long enough to know there were certain frequent categories that I needed to work on (particularly geography and U.S. presidents). So I bought a geography study app for my iPad, began maniacally memorizing lists of presidential trivia, stopped drinking (only for two weeks, thank God), and tried to get eight hours of sleep a night.

My taping day finally arrived, with a caveat; I had been called as an alternate. That meant it wasn’t definite that I’d actually play (they always have more contestants on hand than they need, in case of illness, etc.). And that is, in fact, what happened. The show tapes five episodes (one week’s worth) in a single shooting day, and after waiting for nine months I sat through five games without actually playing. I was told to return the next day, and that I would certainly play then.

Initially I was disappointed not having played that first day, but with hindsight I’m actually glad it worked out that way. I was incredibly nervous  —  being on the actual set of the show I’d watched every night of my life was a surreal experience (if Alex Trebek had been there I think my head would have exploded), and when I first got up there I was literally shaking with fear. But when I returned the next day I had the lay of the land and knew what to expect, and found myself exponentially calmer. And thanks to that first day of inactivity I had learned that the studio was kept so cold that the crew wore ski parkas inside, so I took the liberty of wearing long underwear under my suit and tie the day I’d actually play (true fact), and was able to relax on stage in toasty comfort.

I was selected to play the first match that second day. The game itself was a whirlwind, a total blur. The day the show finally aired (two months after we taped it) I was messaging with one of the other contestants and we both admitted that neither of us could remember ANY of the categories of our match. But I did remember the final Jeopardy question:

“In ‘Histoire des Navigations aux Terres Australes’ Charles de Brosses coined this term for the many islands of the region.”

Both my opponents answered “Oceania,” which was incorrect. Now, I have no idea who Charles de Brosses is, and I certainly have never read ‘Histoire des Navigations aux Terres Australes.’ But from watching Jeopardy every night of my life I know that the questions on the show are often phrased so as to offer hidden clues to the answers. The question said the term was coined for the “many islands” of the region. And “Polynesia” means “many islands” in Greek. So I wrote that down.

And I got it right. I won on Jeopardy.

After winning, there’s no time to celebrate or relax. They start taping the show that will air the next day immediately. The winner is whisked to a room to change their clothes (you’re told to bring multiple outfits in case you win). I slipped into a different suit and tie and was back on set for Game 2 within minutes.

Luckily by this time I had gotten the hang of the buzzer, which is the key to the entire game. You realize pretty quickly that anybody who makes it on to the show knows the answer to almost every question, so ringing in first is the key to winning. But it’s tricky  —  you’re not allowed to buzz until the host finishes reading the question. There’s a bank of lights that viewers don’t see watching at home that go off when you’re allowed to buzz in, and if you hit your buzzer before those lights go off you’re locked out and miss the question. I think being a musician was a distinct advantage in buzzing  —  there’s a rhythm to it, and by my second game I was feeling it.

That second game was another whirlwind, another blur. I DO remember that when the categories were first revealed one of them was “Guitar Talk.” I play guitar for a living so I did pretty well in that one (that was just the luck of the draw  —  the categories for each game are entirely selected at random). And I got final Jeopardy again as well (the correct response was “who is Netanyahu,” which I misspelled, but they don’t count for spelling as long as your intent is clear), and, just like that, BAM! I was a two-time Jeopardy Champion.

But there was no time to bask in any sort of glory  —  we broke for a quick lunch and then I had to change again for Game 3 (same suit as Game 1, but different tie). My iPad app purchase came through for me in that game when I was able to correctly identify the country that shares the longest border with Russia (“what is Kazakhstan?”), but I found myself WAY behind  —  at one point I had $4,000 and the leader had $14,000  —  but I managed to battle back in Double Jeopardy, and by answering the last question on the board correctly (“who is Paddington?”) I managed to go into final tied with the leader at $14,200 each.

This created a conundrum. We each basically had no choice but to bet our entire stake on the final question  —  if one of us got it wrong the other would win, and if both of us got it right we’d tie and both win. So I went all in. The category was “European Landmarks,” and the question was:

“Of the principal architects working on it from the mid-1500’s to the 1980’s, like Pierre Lescot and Hector Lefuel, none were foreigners.”

And that was wrong, too (Insert sad trombone sound effect here).

Me and the guy I was tied with paid the price for our mutually assured destruction scenario and both went to $0. And our opponent, who had had $12,000 less than us going into final, actually won the game with an incorrect answer and just $2,000. Apparently our game was trending on Twitter the night it aired  —  as Jeopardy games go, it was an incredibly exciting finish.

And so my Jeopardy run came to an end. For three blissful games I was King of the Nerds, but I had been dethroned. I bought a bottle of champagne on my way home from the studio, and celebrated with my first drink in two weeks  —  I’d achieved a lifelong dream, and won enough cash to help me recover from the terrible gig-less year of 2020.

And now I know how to correctly spell “Netanyahu.”

Guitarist Jon Spurney has been a member of Local 802 since 1988.